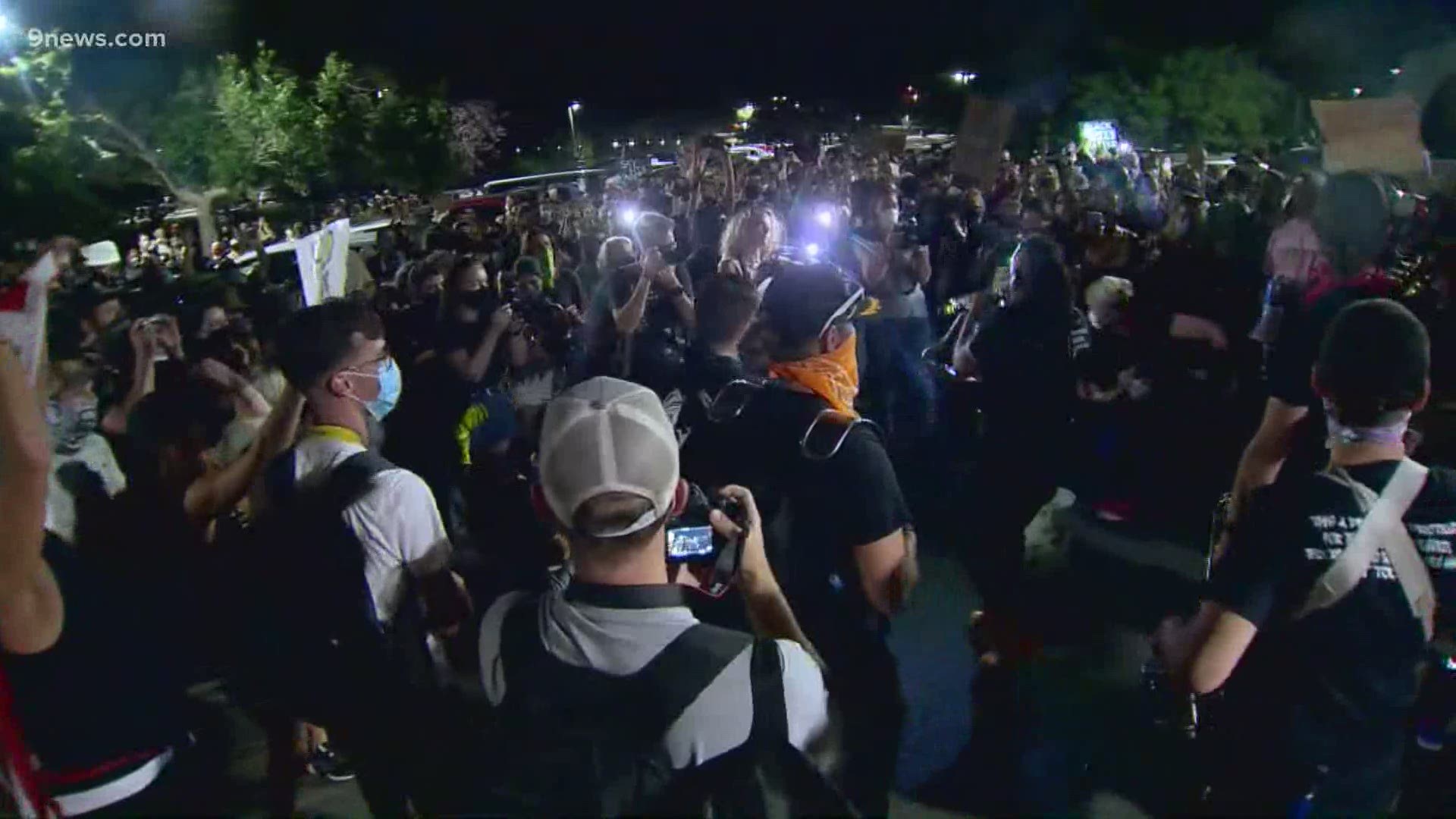 GREENWOOD VILLAGE, Colo. — Nathaniel Rateliff, Wesley Schultz of the Lumineers, the Flobots and other local musicians organized a "play-in" and march in Greenwood Village on Monday night to protest a resolution the city passed earlier this month in response to Colorado's new police accountability law.

The group is calling for Greenwood Village to overturn resolution 40-20, which protects the city's police officers from personal financial liability if they are sued for wrongdoing under the law. Instead, the city would cover court costs, attorney fees and fines.

The "March and Play-In for Justice" began at 7:30 p.m. at Greenwood Village City Hall.

Musicians performed for and spoke to the crowd that had gathered for about an hour.

The group then began marching through the city while music continued to play, stopping briefly every once and a while to allow the crowd to chant.

Members of Nathanial Rateliff and the Night Sweats, The Lumineers, Flobots and others marching with protesters from Greenwood Village City Hall #9NEWS pic.twitter.com/shR3T3c3BV

They eventually ended up back at city hall, playing an impromptu jam session before the group broke up just after 10 p.m.

Members of Greenwood Village's City Council have not responded to 9NEWS' request for comment about their votes in favor of the resolution.

Councilmember Jerry Presley did provide 9NEWS with a video shot at his home, in which he explains his support for the resolution.

"I’ve been asked how I could vote for the resolution if I also believe that Black lives matter, and to me, this is not an either/or choice," Presley says in the video. "The resolution does not shield the police from illegal acts. Officers are still subject to criminal liability including being sentenced to jail. It also does not shield officers from being disciplined or fired ... A police officer represents the city and the buck should stop at the city council.”

The group of Colorado musicians at Monday's protest also promised to boycott Fiddler's Green Amphitheatre – located in Greenwood Village – and is asking for music fans to do the same.

An online petition reads, in part:

"We, music fans and artists, stand in solidarity with the Black community against police brutality and call for the immediate repeal of Greenwood Village’s Resolution 40-20, and stand with artists who will not play Fiddler’s Green Amphitheatre until they do.

Live performances at Fiddler’s Green are a major source of revenue for the city of Greenwood Village. Because the city council does not understand why it is imperative—from a civil rights and safety perspective—to abide by our statewide laws, we hope that they understand why it is also an economic imperative that we as artists and fans will now refuse to spend our money in Greenwood Village."

The petition has been signed by nearly 3,000 people online and the following musicians:

"AEG Presents and the Museum of Outdoor Arts, the non-profit which owns Fiddler’s Green Amphitheater, stand together in support of Black Lives Matter and against social and racial injustice. We also stand in support of all the artists who have come forward to lend their voices to progress, both locally and nationally. AEG Presents, as a music company that operates a venue in Greenwood Village and works closely with its police department, has unique perspective and connections to this issue. We have already reached out to key voices on both sides with the intent of bringing all parties together for meaningful dialogue and resolution."