Gov. Jay Inslee said the president's memo was "illegal" and also accused Trump of using it to distract from the impact of the coronavirus pandemic. 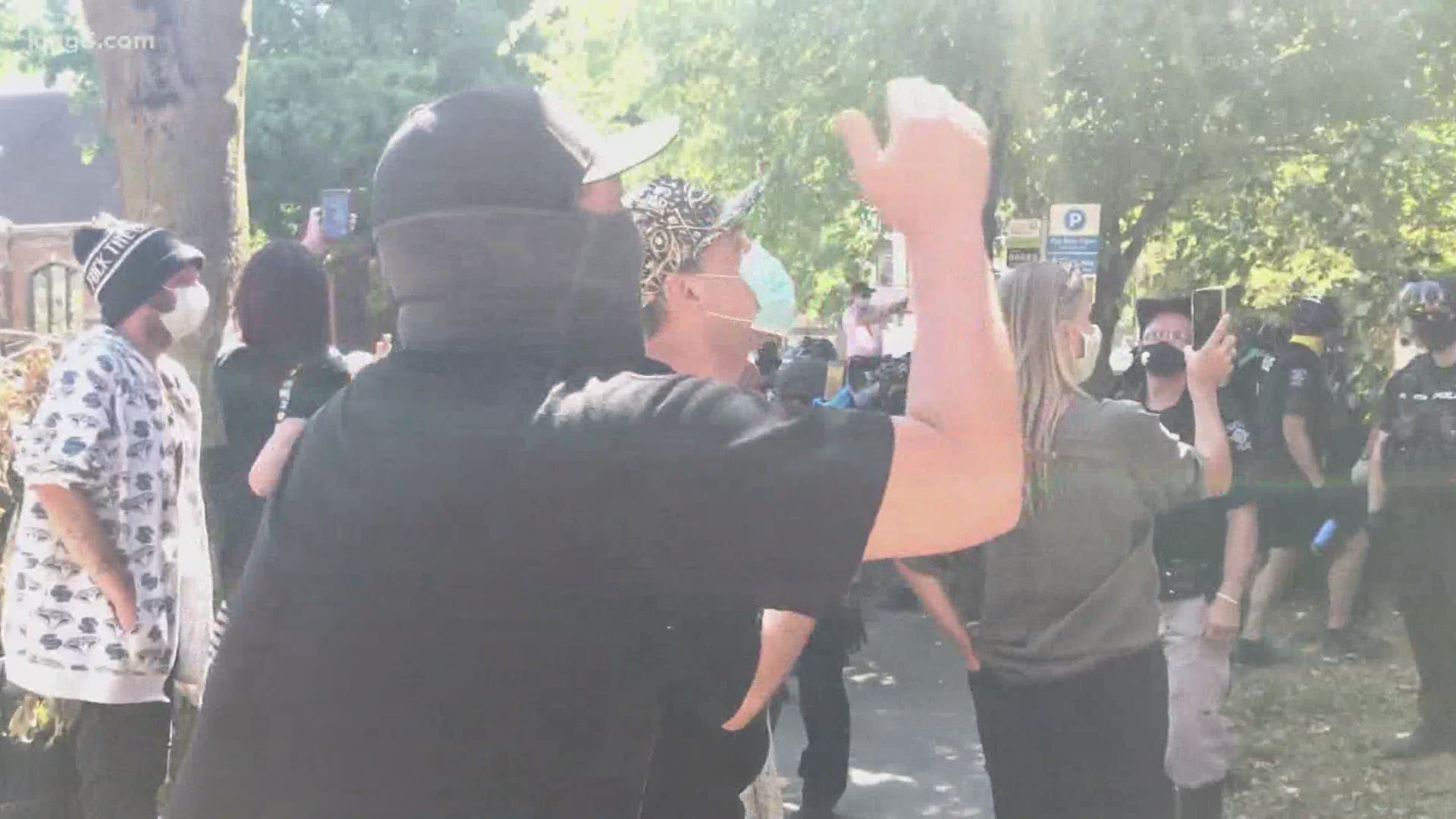 Washington lawmakers are speaking out after President Trump ordered a federal review of ways to defund Seattle and other cities he deemed "lawless."

The president named Seattle, Portland, New York City and Washington D.C. in his five-page memo that orders federal agencies to send reports to the White House on how funds can be redirected elsewhere, away from the cities he named.

But some leaders are dismissing it as a political gimmick that's unlikely to stand up in court, if implemented. The president’s threat Wednesday resembles his previous effort to cut funding for sanctuary cities to force them to comply with more stringent immigration policies. The 7th U.S. Circuit Court of Appeals said the effort to cut funding violated separation-of-powers provisions enshrined in the U.S. Constitution. Nevertheless, the president's threat did provoke outrage from Democratic leaders.

Gov. Jay Inslee said the memo was "illegal" and also accused Trump of using it to distract from the impact of the coronavirus pandemic.

“The president cannot and will not defund us," Inslee said in a statement. "He is not a dictator and laws still apply to him."

Seattle Mayor Jenny Durkan said Trump's memo was the "latest attempt to distract from the fact that COVID-19 has infected over 6 million Americans, killed 185,000 people, and destroyed the American economy."

"The only anarchy zone in America, where the rule of law is disregarded, is at the White House," Durkan concluded.

The memo stated, in part, "Unfortunately, anarchy has recently beset some of our States and cities.  For the past few months, several State and local governments have contributed to the violence and destruction in their jurisdictions by failing to enforce the law, disempowering and significantly defunding their police departments, and refusing to accept offers of Federal law enforcement assistance.  As a result of these State and local government policies, persistent and outrageous acts of violence and destruction have continued unabated in many of America’s cities, such as Portland, Seattle, and New York."

Seattle was the first city called out in the memo, and Trump specifically references what protesters called the Capitol Hill Autonomous Zone (CHAZ), which later became the Capitol Hill Occupied Protest (CHOP).

For three weeks, protesters took over six blocks of the Capitol Hill neighborhood.

"Notwithstanding the fact that law-abiding citizens live and work in the invaded area, the local government effectively endorsed this lawlessness and taking of property by, among other things, abandoning the Seattle Police Department’s East Precinct building and forbidding the police force from intervening to restore order," the memo read.

The president also mentioned the riots and protests in Portland, which have been ongoing for over 80 days, his office said.

"For much of this period, State and local officials in Portland have taken insufficient steps to protect the Federal courthouse, and initially rejected offers of Federal law enforcement assistance," the memo stated.

Within the next two weeks, Russell Vaught, the director of the Office of Management and Budget, needs to come up with a plan for heads of executive departments in reporting federal funds provided to Seattle, Portland and other cities.

"My Administration will not allow Federal tax dollars to fund cities that allow themselves to deteriorate into lawless zones," Trump's memo read. 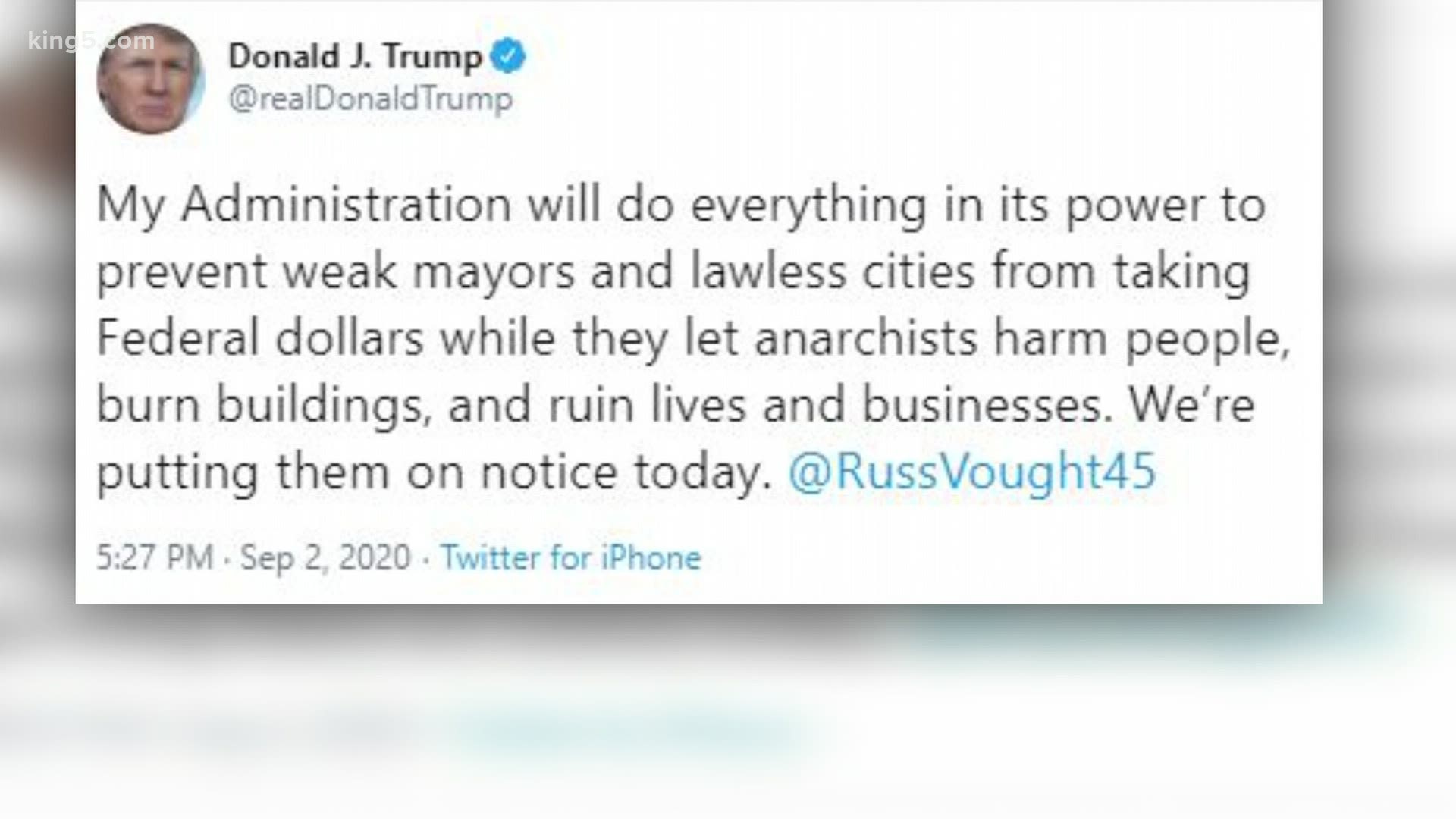