In 2017, Colorado passed a law making it illegal to falsely represent pet as a service animal. 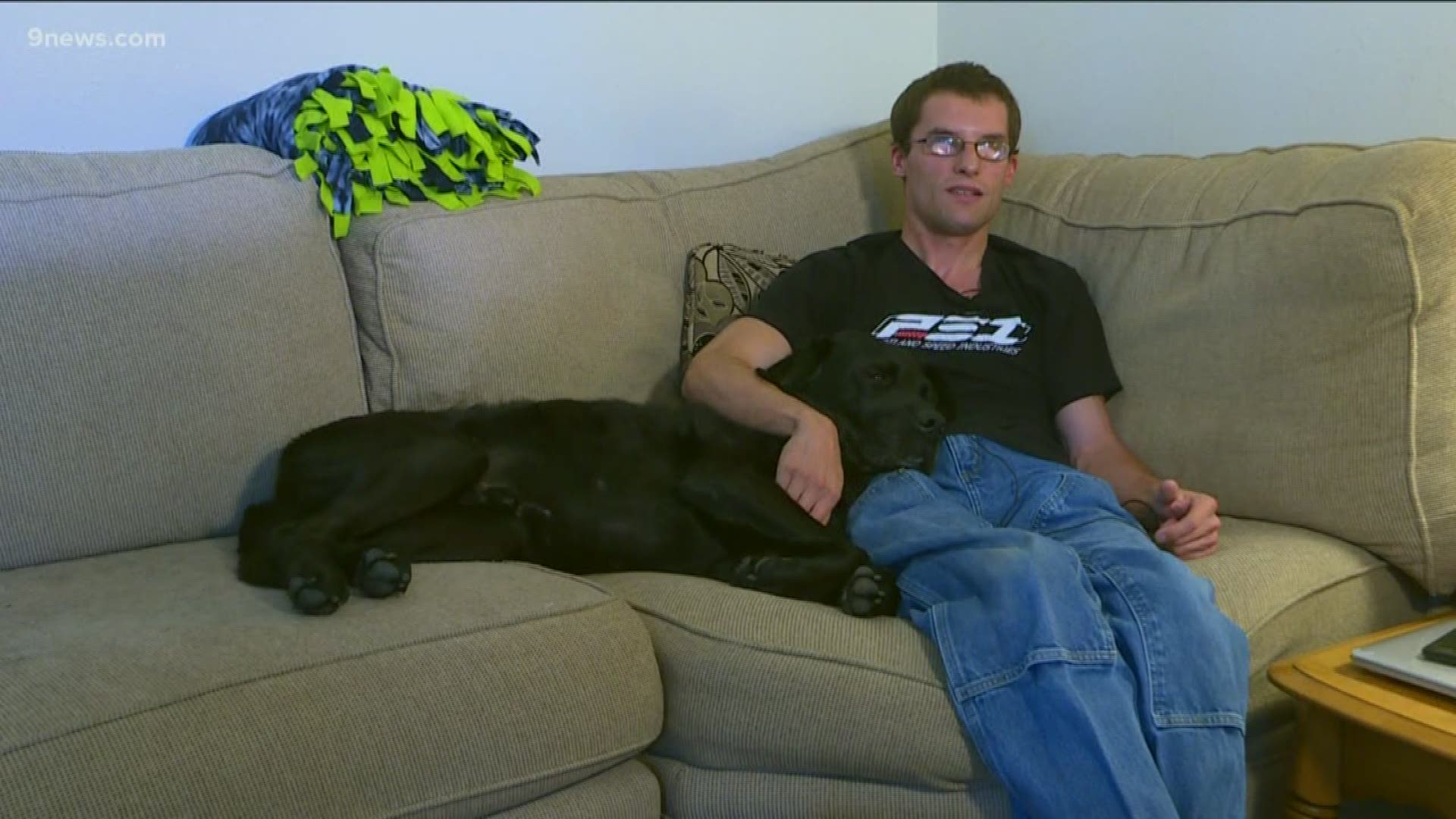 LONGMONT, Colo — Brian Hergert loves to work on cars. He loves to get dirty and work on the engine. He bought his own car even though there is no way he could ever get behind the wheel.

"Well, I'm just gonna hold on to this thing and try to find somebody to drive it," Hergert, a Longmont resident, said.

The 25-year-old has been legally blind since birth. But, that doesn't stop him from changing his roommate's oil in the front driveway.

When he does need a set of eyes, he relies on his guide dog, Sherman.

"I got Sherman in August of 2013 and without him, I don't have any idea what my life would be now," Hergert said.

He found Sherman through Guide Dogs for the Blind.

"So, mainly, his job is to help me get around and take the place of the cane and be an obstacle avoider instead of an obstacle locator," Hergert said.

Before Sherman ever got to Hergert, he had to earn his job.

"For the training, they spend about, I think it's roughly 12 months with their puppy raisers," Hergert said.

John Baptista Jr. and his wife Susan have been puppy raisers for nearly 20 years training dogs from birth at their home in Loveland.

"We had a lot of people asking if we would train their children," Susan Baptista said with a smile.

The Baptistas said service dogs have to be a certain type.

John Baptista  said the dogs are taught to be calm in social and many busy situations.

"You have the dog for 12, 14 months then they go back for formal training," John Baptista said.

Guide Dogs for the Blind will train dogs for four months, but John Baptista said the standards are so stringent only 42% actually make it to become working guides like Sherman.

"I signaled for Sherman to go forward and cross the street and he stopped and kind of curved himself in front of me," Hergert said. "About the time he did that, a car comes flying around the corner and I don't know how fast they were going, but if I would've stepped out, I would've been dead."

That's why Hergert gets upset when he hears about ads online that sell service animal vests and certifications to anyone wanting to portray their dog as a service dog.

"I know you can go on Amazon and you can purchase the same style harness that we use," Hergert said.

The Baptistas said it's wrong.

"To create something like this, this that says, 'hey, take your dog anywhere,'" John Baptista said.

"I think it's a lie," Susan Baptista said.

In 2017, the state of Colorado passed a law making it a misdemeanor for people to falsely claim their pets as service animals. But, John Baptista said it still goes on and it's not a harmless crime, especially when untrained pets dressed as service dogs misbehave in public places.

"Those with true working animals, service dogs that have been trained by reputable companies, there is no ifs, ands, or buts, they are being impacted," John Baptista said.

Hergert said other people's actions have caused him problems.

"You know if you're really going to do it, you have to follow a procedure," Susan Baptista said.

There's no standard to qualify credentials or what makes a "trained" dog.

"I'm sure whoever is making these certificates knows what a real one looks like," Susan Baptista said.

No one, Hergert said, is enforcing the law.

"Even if you reported it to the police or the sheriff's department or park rangers or anybody, are they really going to know the difference? Probably not," Hergert said.

It is not illegal for companies to sell vests or certificates for service animals. Often, these websites have disclaimers essentially saying that their products are sold to customers on the 'honor system'.

Hergert just wishes, like his car, this is a problem he could fix.