How live venues are faring after nearly a year without crowds

Stages throughout Colorado have gone silent as the COVID-19 pandemic puts limits on the size of crowds and events. 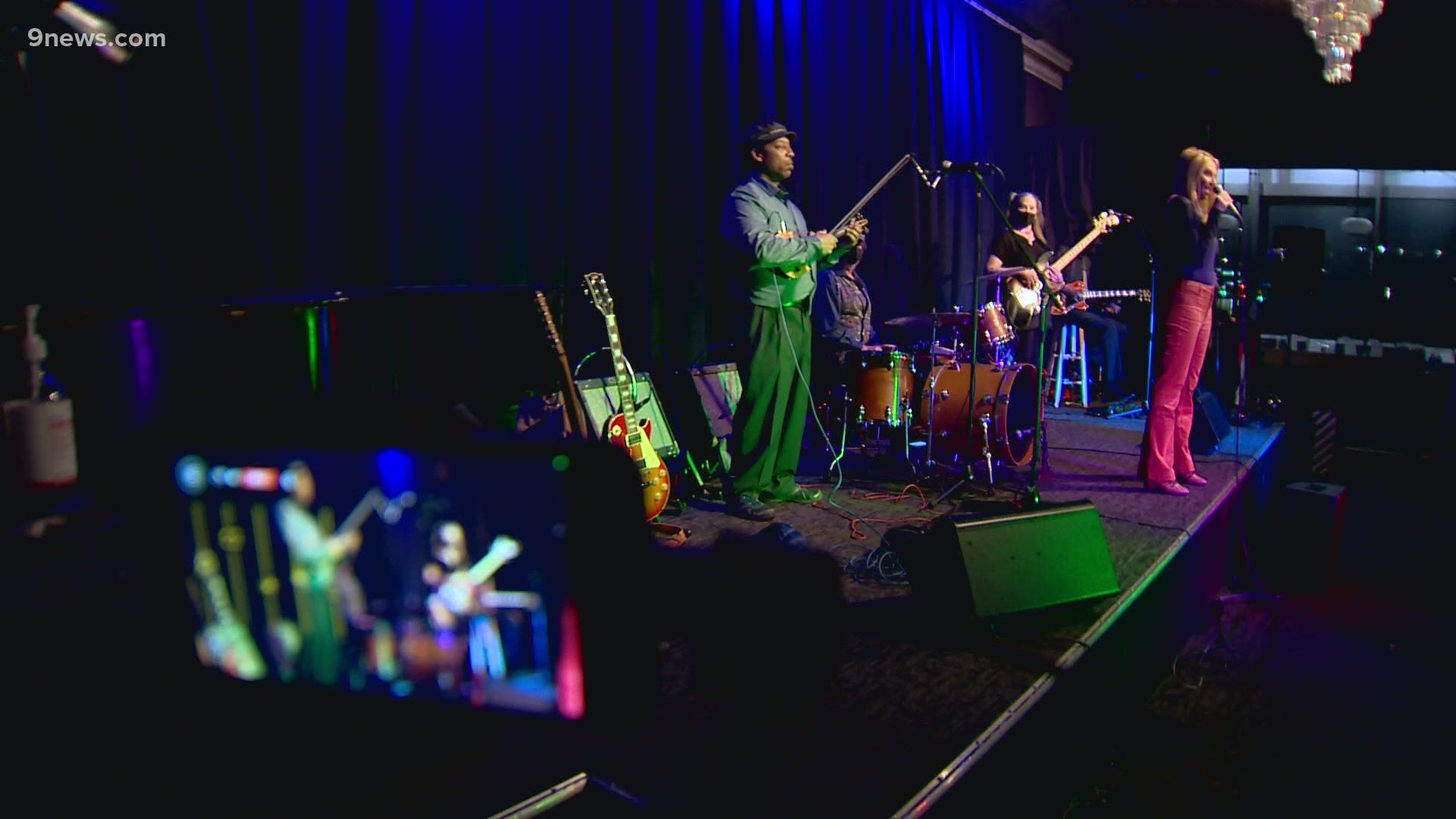 DENVER — The signs on theaters in Denver have said “see you soon” for months, as live music slips into nostalgia.

According to a Colorado Creative Industries report, it's estimated more than 31,000 Colorado jobs were lost in the performing arts industries between April and July, accounting for more than $800 million in lost revenue. Public health measures have put shows at traditional venues on pause, though others continue in a non-traditional way.

One example is Dazzle Jazz in Denver, where General Manager Matthew Ruff pays musicians with donations as they perform for nearly empty rooms amid new regulations.

“When we first re-opened in June – horn players were not allowed and that was because whoever made the regulations assumed that there was spittle coming through a horn when somebody plays it even though that’s not actually the case,” he said.

Part of the donations from the live stream also go toward a food pantry, created when musician Cass Clayton learned a fellow musician was saving half of their sandwich for dinner to get by.

“They weren’t getting three meals a day, you know, there were a lot of musicians who were not doing well and that continues," said Clayton. "And so Dazzle immediately took up the cause, and said, 'well we can just turn our entire bar area into a food pantry for musicians' and that’s how it started."

At the Boulder Theater, silence was once a reprieve. But after months of it, it’s lost its welcome.

“Not during normal times, because it’s always noisy, so a little quiet time is OK, but it’s been quiet for quite some time,” said Cheryl Liguori, the CEO of Z2 Entertainment which runs the Boulder and Fox theatres.

There are still tables and chairs set up for a small crowd to watch cabaret, but even that small pleasure went away when COVID-19 cases surged again in November.

“I think it’s been a real … hole in people’s hearts, the people that really connect with the live music experience,” Liguori said.

The iconic Lion’s Lair on East Colfax Avenue in Denver hasn’t seen a band since March.

“This is more of a bar, a lot of people started playing here,” owner Doug Kauffman said. “I remember seeing Nathaniel Rateliff playing here with his old band Born in the Flood.”

RELATED: Donations may help keep The Lion's Lair on Colfax from closing for good 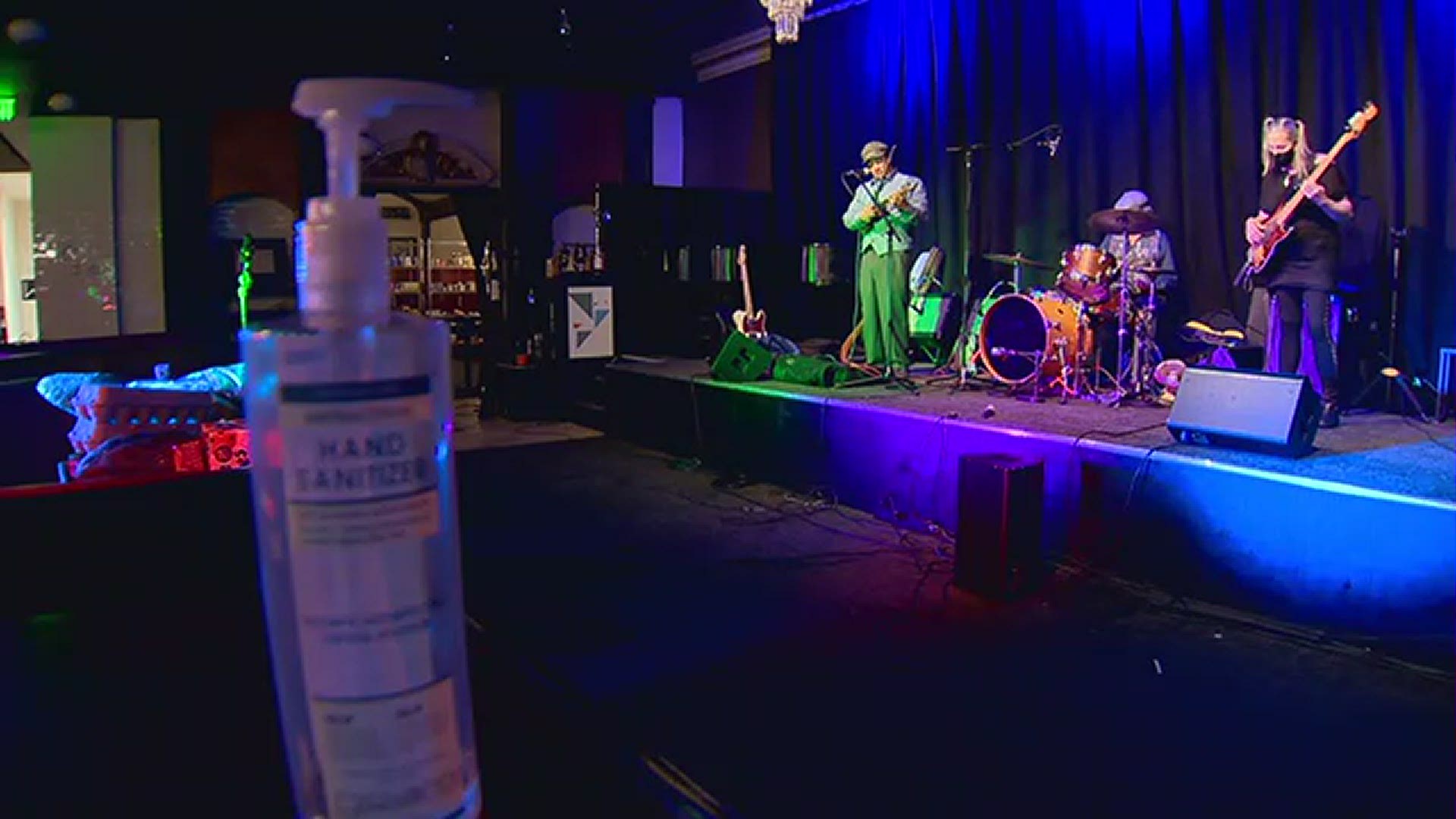 Smaller stages like Kauffman’s help up-and-coming bands get noticed, but they’ve also been the hardest hit by restrictions.

Kauffman said Lion’s Lair can only have 25 people inside at a time now, and that it needs to be packed to actually make money. That’s why the Lion’s Lair will stay closed until more people can gather.

But a few miles down Colfax, another venue is preparing to reopen.

“I think that the realization continually sinks in that our idea of normal is not coming back anytime soon,” said Helen Murray, the executive producer of the Aurora Fox Theater.

Because Aurora Fox is under the umbrella of the city, it was able to open for a socially-distanced show in September without worrying too much about the profit from ticket sales.

Soon after that show, like Boulder Theater, it closed because of a surge in COVID-19 cases.

But rehearsals began again in February, and on Feb. 26, 'The Pavillion' opened with a cast of three actors. Two of them, a husband and wife, were strategically cast as high school sweethearts.

“I find my joy on stage and I really, really hope that I can bring some of that back to audiences that haven’t seen live theater in months and months,” said one half of the married couple, Kelly Uhlenhopp.

About 50 people watched, all masked, while the actors performed, also mostly wearing masks.

The announcement before the show welcomed the crowd to "one of the first shows in the country."