Denver artists look back at the strange year that was 2020

For creatives, 2020 was a strange year ... and one that will inspire their work for the foreseeable future. 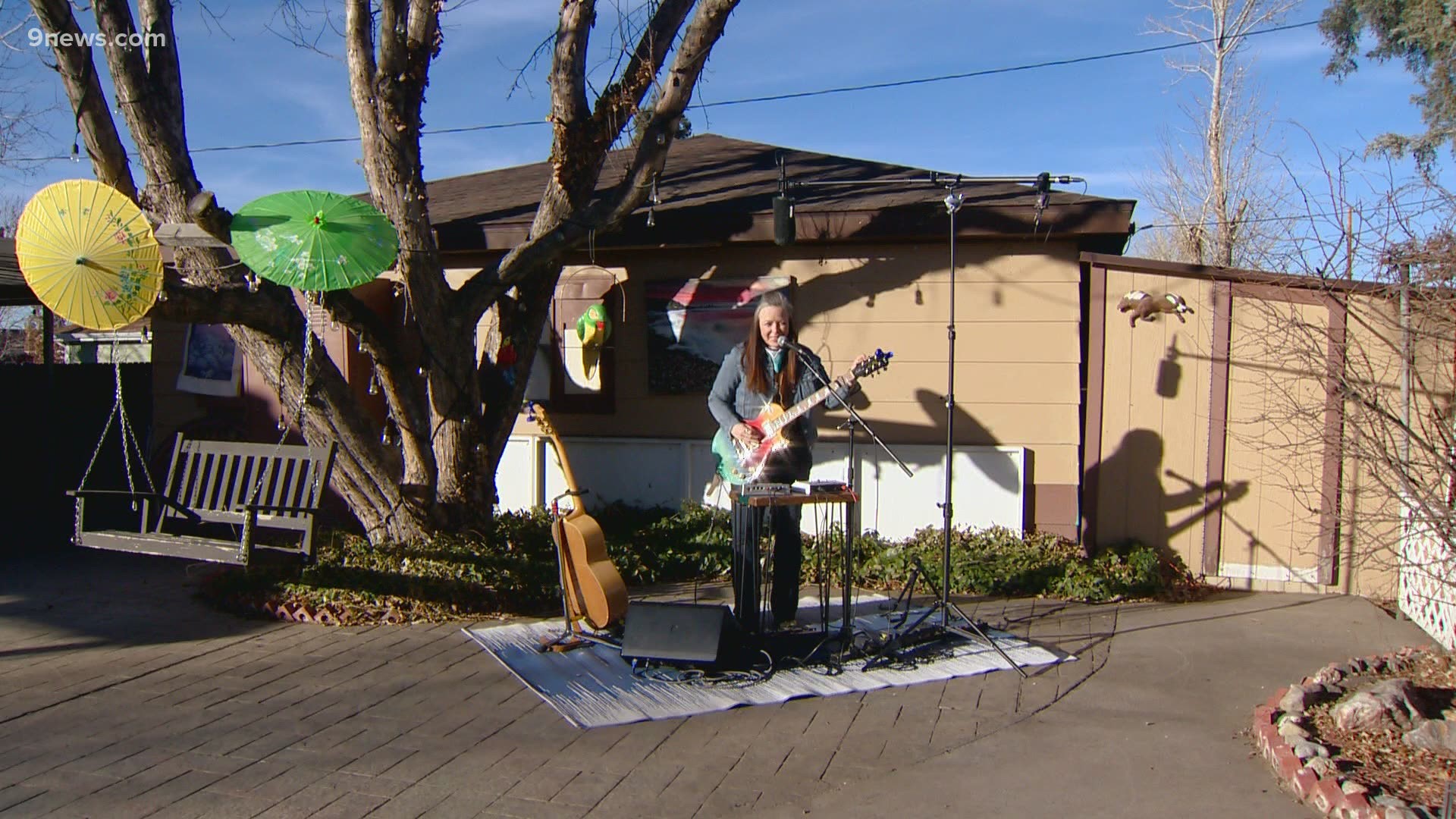 DENVER — This is a year that many of us will never forget.

The news cycle in 2020 started with destructive wildfires in Australia ... and just kept coming. A global pandemic, historic protests, raging fires across the American west and a contentious election cycle have made their mark.

I wondered how this year looked through the eyes of artists in our community; people who needed to create, even when things felt bleak. Inspiration came with each new event in the news.

Meet some of those artists below.

When I met Harrison Nealey more than 10 years ago, he was half of the duo called “The Magnet Mafia,” a street-art pair who created magnets and pasted them all over Denver.

These days, Nealey works with steel, making furniture for interior designers and other clients for his company Industrial Arts.

He said his workshop in northwest Denver is a place where he can take a break from the never ending cycle of news events of 2020.

“This is my yoga, this is my meditation, this is where I can get into a zone--it takes my mind off of everything else,” Nealey said. “It’s not an emotional thing—I can disconnect from my feelings and just create.”

Nealey has needed more of that meditative time in his shop this year. He says he was at his shop when he saw the video of George Floyd. It hit him hard.

“All the folks getting locked up and killed and brutalized, it’s definitely made me more raw. Everything has been harder. Waking up in the morning, going to sleep, going out of the house, driving, walking down the street,” Nealey said. “My wife really doesn’t want me out of the house after dark with everything that’s been going on this summer--just general concern about not wanting to be in the wrong place at the wrong time.”

He knew he had to do something to remember Floyd, so he used his artistic abilities to make a sculpture commemorating the 46-year-old man who went by “Big Floyd.”

“This was something I wanted to do to help myself feel like I was contributing,” Nealey said, holding the large, metal sculpture that had been hanging up in his workshop. “Creating art in general is therapeutic, but as far as this year with all the social injustices, I think it’s going to be how artists translate what they’re thinking and feeling.”

My husband is a bit of a music snob, and when he heard Jen Korte perform in my story, he thought she was fantastic.

Korte has a few different projects in town, and said that this was going to be her year.

2020 was the year of her album. She was finally a full-time musician after years of hard work. And then the pandemic hit.

So even though things stalled a bit, she kept creating just like her fellow artists.

“There will be a flood of messaging and storytelling that comes from this time because there were so many huge things that happened in one year,” Korte said.

Inspiration struck in a few different ways for Korte. She made videos urging people to get out and vote in the 2020 presidential election and posted them on her Instagram (@jenkorte).

“Getting awareness out was really important to me,” Korte said. “Sometimes I was like, ‘This is stupid, why am I doing this?’ and then I would get messages of encouragement from people who were like, ‘Hey, I really like your voting videos, thank you for making them.’”

She also found inspiration in her own home. Her wife is a nurse, and for a time they lived on separate levels of their Denver home because not enough was known about COVID-19. Korte has asthma, and the couple was worried she’d become very sick if the illness made its way into their house. She said she wrote the song about this, and about how much she admires her wife and her profession.

“It’s called 'Halo' because I think she’s an angel--there’s grace and dignity that comes with that profession and I see it in her all the time, and I constantly see people disrespect it,” Korte said.

She also wrote a song called “Lifting Your Voice” about the protests and uprising.

“I’m telling the story of the voices of people who aren’t heard,” Korte said.

Check out more of Jen Korte’s music on the Lady Gang website. She’s also a part of Jen Korte and the Loss and The Dirty Femmes: A Celebration of the Violent Femmes.

When I met Adri Norris, she was painting a mural for Cleo Parker Robinson Dance. Norris was disappointed she was wearing her spotless shoes that day, without the typical paint splatter. She’s got a keen attention to detail, and thought the paint-dotted shoes would play better on TV.

As she painted on the historic building’s wall, she talked a bit about her preferred subject matter—women in history--and how 2020 has inspired her to dig even deeper.

“In regards to the varying levels of inequality that we experience in our country, it inspired me to focus not just on women in general, but also to really dive deep into those who have been most marginalized,” Norris said. “By elevating these stories, by telling them, showing them, getting them to where there’s an emotional connection--that allows people to examine things more clearly and then gives a place where we can enact change.”

She’s got some projects in the works for 2021, and feels lucky to have been able to paint some murals this summer, including a huge one of Ruth Bader Ginsberg on 12th Street between Lincoln and Broadway in Denver. The biggest she’s done.

Besides her upcoming projects, Norris has another goal in 2021.

“I hope after 2020 we are significantly more empathetic than we have been leading up to this point,” Norris said.

Norris paints under the name Afro Triangle. More of her work can be found on her website.

Adam Cayton-Holland is a lot of things. A comedian. A writer. The author of the book “Tragedy Plus Time” (which is an excellent book, and he suggests that if you buy it, get it from a local bookstore). He’s also a birder, and uses birds he sees as a jumping off point to write about other things going on in his life and the world.

He wrote this essay as a response to all of the things that happened in the first half of 2020—including his 40th birthday.

“This year has been so nuts with the pandemic, and all the racial inequality and the rising up to combat it, and you’ve got million thoughts swirling in your head and I was also turning 40,” Cayton-Holland said. “I always deal with things by writing about them.”

Cayton-Holland had the majority of his comedy gigs cancelled this year because of the pandemic, but he’s still co-hosting a podcast with Andrew Orvedahl and Ben Roy. It’s called “The Grawlix Saves the World” and the premise is that the trio take on challenges in hopes of bettering the world by bettering themselves. He said 2020 has interestingly been the perfect year for this self-help-style podcast.

“A lot of this podcast has been self-improvement and mental health,” Cayton-Holland said. “It’s comedy first, but every week we try and do a challenge to better ourselves.”

Might I add, this podcast has been a bright spot in this year—I listen to it while walking around my neighborhood with my dog. It makes me laugh out loud so much, people stare. But who cares, it’s 2020.

For more of Cayton-Holland’s work, go to his website.

Suzi Q. Smith didn’t bat an eye when I asked her to recite her poetry on a park bench in the middle of Denver. She said she’s done weirder. At poetry events, it’s pretty common to see poets walking around, reciting their works, memorizing while they pace.

She said her work this year has been more full of hope than ever. This time of isolation and reflection can bring upon much-needed change, she said.

Smith said she’s been intentional about creating joy in 2020. Her family has seen loss due to COVID-19, and she’s know many people who have been affected by loss due to the pandemic.

“Me and grief hang out pretty regularly. We have coffee. Breakfast sometimes, but we don’t live together. I send grief on its way,” Smith said.

In June 2021, Smith will have a new collection of poems. It’s called “Poems for the End of the World.”

More information about Smith and her work is on her website.

“It’s important to make art because right now. Times are difficult and art brings such joy,” Blais said. “Right now it’s feeding our souls in such a necessary manner that I couldn’t imagine what we would do if we couldn’t keep creating.”

The group was able to put on pandemic-safe performances this year.

“Every work that we create we hope it’ll allow people to step outside of the really difficult time that we are currently in,” Blais said. “Our hope in 2020 was that we could help people escape a little bit and bring them into worlds that were a little more fantastical.”

They hope to continue that goal into 2021 with their new work, “Celestial Chaos.”

“This one takes place in an imaginary world high in the clouds where the Greek gods are coming together to try and create a brand new world that is better than the last one,” Blais said.

Rainbow Militia Circus will be performing their new work “Celestial Chaos” starting Feb. 4th, 2021, at Denver’s EXDO event center. To learn more about that and past performances check out their website. (https://www.rainbowmilitiaaerial.com/)

Frankie Toan knows that art will help tell the story of 2020.

“I think that artists are a great place to look for a little bit of understanding in a time when we don’t have the perspective that maybe we will in a year or five or 10 years,” Toan said.

Toan works with textiles and soft sculpture, and the works are typically installations. The events of 2020, namely the pandemic, had Toan creating some functional art. Namely, some really sculptural and cool masks.

One of the masks was made for a mask fashion show at the Denver Art Museum. It’s made of fabric, with needles affixed to it like porcupine quills. The needles are Toan’s own.

“I’m trans, and I collect all of my own needles and syringes and things I use for my own medical transition,” Toan said.

The other mask Toan made for a virtual dance party. A dress-up event when in person, Toan knew they had to create something special.

“Just for a little bit of joy during really what was the beginning of the unknown,” Toan said.

“I can still see the joyful thread of my work going through these pieces and through this year even though it’s been a pretty dark year,” Toan said.

Toan is one of the Denver artists who will be contributing to Meow Wolf Denver, which is scheduled to open in 2021.

Go to Toan’s website to learn about past and future projects.

RELATED: Year in Review: Political news that made headlines in 2020