Don't believe the rumors, this is the real story behind the Glenwood Springs flag

It's been flying high above Glenwood Canyon for 51 years and counting. 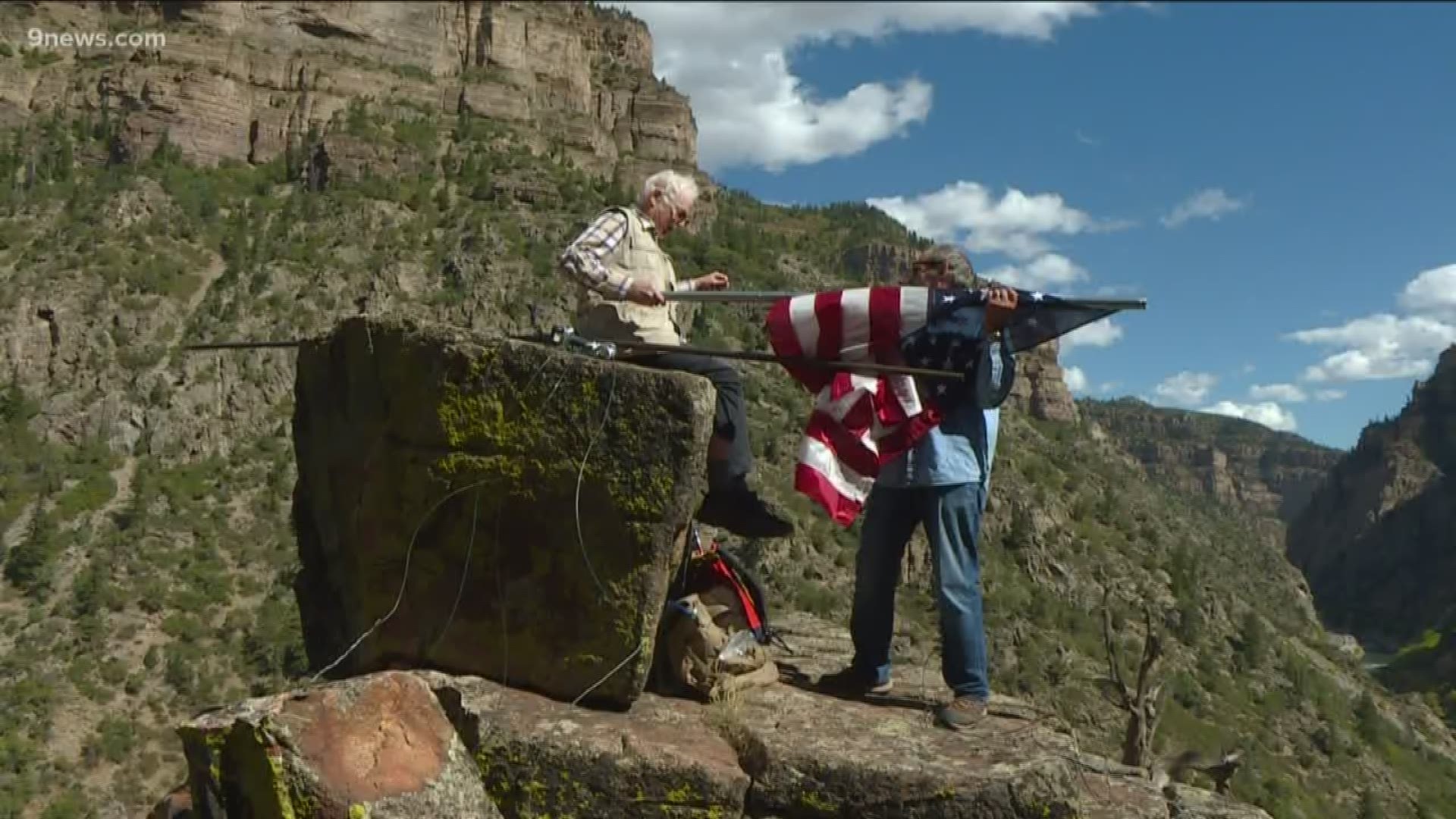 “This is going to be cake.”

Those words from photojournalist Anne Herbst played through my mind over and over during our six-hour hike, scramble and climb that ended on top of a tiny, exposed piece of rock on a cliff high above Glenwood Canyon.

In Anne’s defense, I was also confident the journey wouldn’t be very difficult. It was described to us as a climb, but it sounded more like a hike. Sure, we had to carry our camera gear, but we’ve done that before.

A couple years ago, Anne and I hiked eight miles on snowshoes to cover a story in Gothic, Colorado. Anne has carried her gear to the top of Long’s Peak before. A short climb in Glenwood Canyon? This was going to be cake. 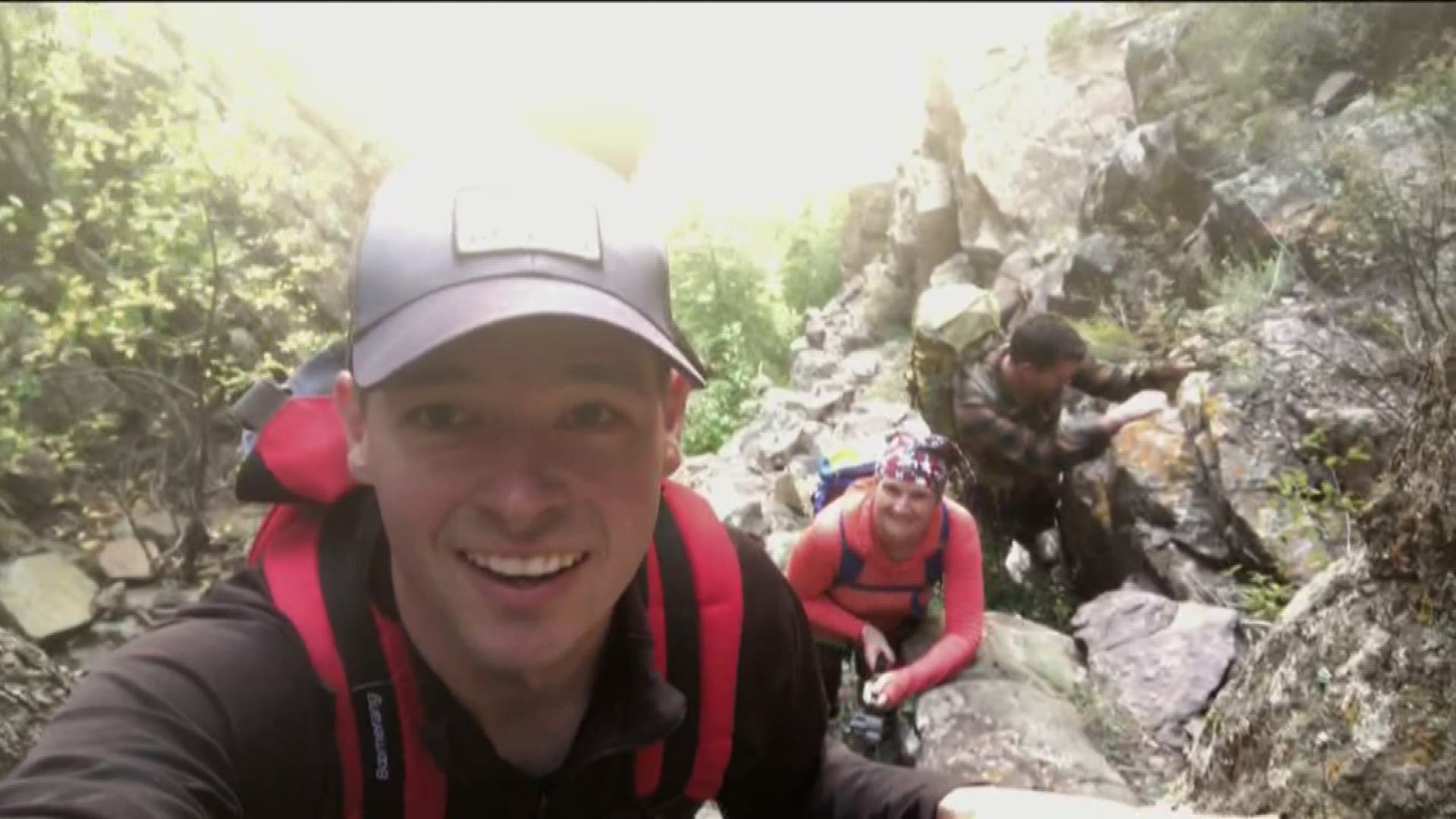 So, here’s the story

Two old buddies, Steve Kibler and Mike Paddock, started hanging out together in the 1960s. They went to school together in Palisade and loved climbing around Glenwood Springs.

“One thing led to another and being crazy as we are, everything clicked,” Kibler said.

Before the Vietnam War came calling, the friends came up with an idea.

“We were sitting around talking one night,” Paddock recalled. “[We] said, ‘We ought to leave something to remember us by. Just for fun."

“I was one week from the Air Force,” Kibler said. "[Mike] was two weeks from the Army, so we decided to do something crazy.”

The pair decided to hike and climb up to the top of a cliff in Glenwood Canyon and put up an American flag. They drilled a hole in the rock and staked the flag on a pole. The 19-year-olds made the climb for the first time on March 13, 1968. At least one of them has repeated the trip every year since to replace the wind-beaten flag with a brand new one.

“We have hundreds of people that have said, ‘I make my kids look for [the flag] every year,’” Paddock said. “’Every time we go through the canyon, they have to look for it.’”

Paddock and Kibler are 71 years old now. They’ve invited family and friends to join them on the climb over the years. For the past 10 years, Josh Mattson has made every climb with the pair.

“I think they like adventure, and I like adventure and something exciting, so I think we all fit in. Just, yeah – it’s a great adventure every time,” Mattson said.

On the most recent climb, the group brought along Paddock’s daughter, Michelle, and two journalists who’d been eager to cover the story for several years.

One of them said, “This is going to be cake.”

The hike started on a beautiful yet breezy morning in Glenwood Springs. We asked Kibler how he was feeling as he slung his pack around his shoulder.

“Yeah, we’ll be alright. I took a couple of Advil,” Kibler laughed.

We hiked for at least 30 minutes alongside railroad tracks sandwiched between the canyon and the Colorado River. When I say “hiked,” that means Anne and I ran ahead of the group to capture shots of them walking toward and away from us. Getting that opening shot for a TV story is hard work.

Kibler and Paddock have made this trip so many times, they know the route like their own backyards.

At a certain point in the hike, the group took a turn toward the canyon and started hiking up the loose dirt. We grabbed tree branches and shrubs to help pull ourselves up and up and up. Fortunately, Anne and I came prepared with gloves. We needed them.

The next section of the climb required a fair amount of scrambling and short sections of bouldering that would have been far easier without a tripod on my back. We just did our best to keep up with the 71-year-olds.

Now might be a good time to mention the legend behind the flag in Glenwood Canyon. Over the decades, Kibler and Paddock have heard a few repeated rumors about who replaces the flag each year.

“One’s that there’s an old sheepherder that actually comes down from on top where he’s running his sheep and replaces it,” Paddock said.

There’s another story about a kayaker who replaces the flag to honor his son. Apparently, there’s a dentist in Aspen who tried taking credit. Good stories. None is true. Over the past 51 years, it’s been Kibler, Paddock and those they’ve invited along for the trip.

“Everybody that’s come up here I claim as a friend and I’ve made a lot of them over the years,” Kibler said.

All their friends have made it the top and back in one piece, they told us. That helped lift our spirits as we climbed higher and higher.

Did I mention the loose rocks? We were very careful to avoid those … except for the time one was unavoidable. Anne can attest that even a small rock can leave a bruise. It didn’t slow her down.

The rest of the climb is a blur, honestly. It was another mix of hiking and scrambling, one foot in front of the other, Paddock and Kibler showing us the way. Before long, we reached the top and the flag pole was in sight.

The wind was whipping as we crawled on all fours across a narrow ledge to reach the base of the rock where the flag pole was staked. Paddock and Kibler climbed up the rock and immediately got to work. Kibler pulled a drill out of his pack and Paddock grabbed a pristine American flag from his.

The two of them worked to fasten the new flag to the pole as Anne and I watched in awe, capturing the whole process through our camera lenses.

“I definitely want to get a picture of everybody,” Kibler said, standing beside the newly erected flag.

He called over to Anne and me. I climbed up beside Kibler and Paddock. The three of us clenched the flag pole in the wind. Anne said she was just fine where she was. She managed to make the picture, clinging to the rock right below us.

I think Anne and I both soaked in the moment and embraced the adventure and our place in the story.

“You know, in truth, I am absolutely tickled pink that the two of you came along,” Kibler told us afterward.

I won’t bore you with details about the descent. The highlight was a section of rappelling that two 71-year-olds completed about 10 times faster than we did.

Looking back at the experience, Anne and I feel lucky to have helped keep a flag flying high above Glenwood Canyon for 51 years and counting.