Storytellers: An unexpected match for a teacher who needs a kidney

Teacher Andy Klaus didn't let anyone know his kidneys were failing and that he needed a donor - something most donor recipients do - but when his school found out they got the word out - and he found a donor is the most interesting place. 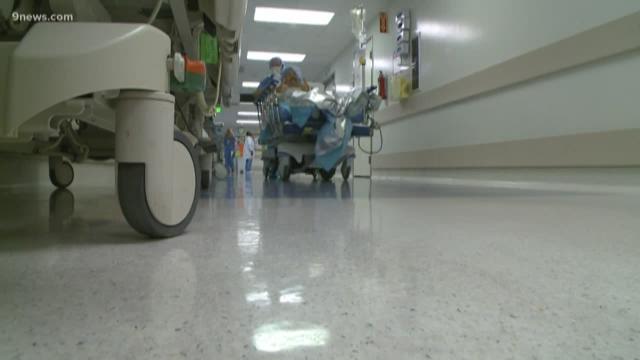 As a teacher, giving comes easy. Even when the student taking it in isn’t exactly eager to receive.

Yet somehow, Andy Klaus Corritore won him over last year. He tends to win them all over.

“He was my favorite teacher last year, so I talked about him a lot,” Patten said.

His freshman history class is noisy as students yell with excitement over a game called “Kahoot.”

“Sid the kid, coming back from zero to hero!” yelled Mr. K as one student finally got an answer right.

But even his biggest fans never knew what Mr. K did after school. Almost every day, going on 2 years now, Mr. K - Andy - connects to a dialysis machine to stay alive.

“It was 10 hours a day, every day, now I’m doing it three days a week for four hours,” said Andy.

“We’re regulars here,” said his girlfriend, Amy Payette, as they wait for a doctor in a hospital room of Presbyterian/St. Luke’s.

Andy needs something he can’t give. His kidneys are failing. He'll die without a new one. The wait-list without a living donor is about 5 years.

“So as we were watching the Olympics, I was like 2020 Japan,” Andy said, thinking he would have to wait until then for an organ from a deceased donor. “Because you really can’t imagine someone being that generous to give them your kidney.”

According to the American Transplant Foundation, someone dies every three and half days waiting for a kidney in Colorado. There are 1,864 people on the donor waitlist, a state number that has doubled in the last decade.

“There’s been a lot of research done on why there aren’t more living donor transplants in the U. S.,” said Dr. Michael Schomaker, a Transplant Nephrologist at PSL. “We’ve found that transplant recipients, 70 percent of them, don’t ever ask a single person about potentially donating to them because it’s such an awkward situation.”

Andy never asked. But once people at Denver Academy found out, they wanted to give.

“I was shocked that none of us knew, and he was still showing up to work every day like nothing was going on in his life,” said Stacey Folk, a mother of a DA student.

Once she found out, the word spread. Folk interviewed Andy, teachers, and students for a YouTube video. She even got the rights from Sony to use The Fray’s song “How to Save a Life.” All of it was an effort to find Andy a living donor.

“And one thing that I did not know was how much better a living donor kidney is than a deceased donor,” said Folk. “Hands down Cadillac, best thing, longest lasting, there’s no comparison in the quality.”

The doctors at Presbyterian/St. Luke’s agree, and add there is not a lot of risk for the living donor.

“Living donation is a miracle without the tragedy,” said Anastasia Henry, the Executive Director of the American Transplant Foundation.

Without realizing it, Stacey Folk became Andy’s living donor champion. It’s the term used for someone who can’t donate themselves to the person who needs a kidney but can spread the word. Ben Patten told his dad, and his dad watched the video.

“First thing I thought was I wish I could do something about it,” said Ben.

Ben couldn’t, but his dad, Scott, could.

“If I can keep a guy like that alive for another decade or two and he changes a few kids’ lives every year, that’s a big impact on the world,” Scott said. “And it’s more than what I can do.”

Scott was one of 17 people connected with Denver Academy who came forward to get tested. He was a match, and, after talking to his wife, decided the risk was worth it.

“I’m so proud of him and I hope one day I can be as courageous as he’s being because most people wouldn’t have the guts,” said Scott’s son, Ben.

“Long time waiting right?” said one of Andy’s doctos as he rolled him into the surgery room.

Doctors realized his kidneys were failing four years ago. He never thought a stranger would give him a new one.

“The fact that someone like Scott is willing to give me their kidney is overwhelming,” said Andy.

Now that stranger is a part of his life, whether they like it or not.

“Ready to go fishing?” asked Andy as Scott visited him two days after the surgery.

Scott gave Andy the chance to keep on giving.

“I’ll help the kids for sure,” Andy said.

What a match they make.