Storytellers: Honor Bell tolls for the fallen and its founder

A year after losing its founder, the Honor Bell Foundation carries on the legacy of Lou Olivera to honor the fallen at Fort Logan. 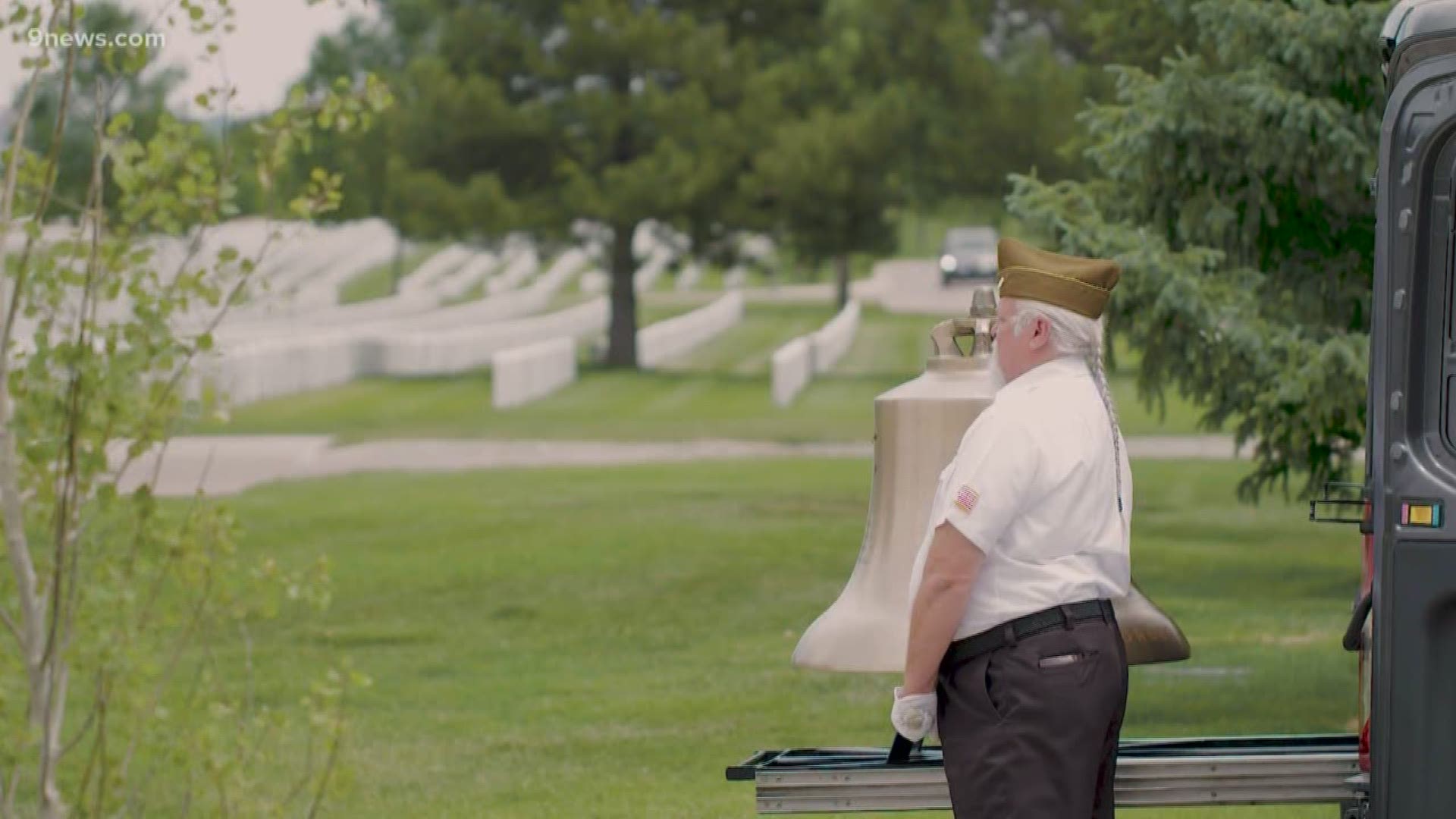 DENVER — What resonates at Fort Logan National Cemetery more than loss is love – the kind of love Snookie Ploughman had for her husband of 55 years.

On a Thursday morning at Fort Logan, Ploughman and her family came to say goodbye. As the hearse and procession of cars pulled up outside the committal shelter, veteran volunteers readied the Honor Bell.

“Oh my gosh. Look at the beautiful bell,” Ploughman said as she waited to be led into the service.

Two volunteers dressed in uniform stood beside the 1,000-pound bronze bell mounted into the back of a van. Inside the shelter, a member of the All-Veterans Honor Guard opened the service for Air Force veteran Jim Ploughman, Snookie Ploughman's late husband.

“When the call of his country was heard, comrade Jim answered,” he read from prepared remarks. “Self was forgotten in the cause of the greater good.”

Outside the shelter, the honor guard provided a three-gun salute and the playing of Taps as an Air Force member presented Snookie Ploughman a flag on behalf of a grateful nation.

Finally, volunteers with the Honor Bell Foundation tolled the bell seven times. With each toll, reverence reverberated across the cemetery.

“It gets to your heart and it just, it brought tears to my eyes,” Ploughman said.

The Honor Bell rolls in and out of Fort Logan nearly every day. Only veterans may toll the bell cast in bronze and speckled with artifacts from 12 Colorado servicemen.

Volunteers who toll the bell continue a tradition started in 2016 by veteran Lou Olivera.

“We found that we shared a love of peanut M&Ms kind of as a traveling snack,” Michelle Mallin smiled. She’d brought a new bag of candy to place on Olivera’s grave marker at Fort Logan.

“Every time I come see him, I bring a few peanut M&Ms,” she said.

Mallin, the executive director of the Honor Bell Foundation, remembered her friend fondly and admitted she wished she could add something to Olivera’s grave marker.

“We wanted to put ‘RLTW.’ ‘Rangers Lead the Way,’ but they wouldn't let us. No acronyms,” she said.

Long before Mallin met Olivera, he was a staff sergeant who served and fought in Panama during Operation Just Cause.

“Things went awry pretty early in the operation and Lou was shot several times,” Mallin said. “For a very long time, he wondered why he didn’t die, that there must be some purpose – something that he was meant to do.”

Olivera attended the funeral for his friend's father, a WWII veteran. He noticed something was missing.

“There were no honors,” Mallin said. “Nobody showed up to do honors for whatever reason.”

Mallin said Olivera dreamed up the Honor Bell and found purpose in sounding the loss of a veteran.

“For the last four years of his life, it was everything," Mallin said. "It was every day. For all of us.”

Service after service, Olivera tolled the bell hundreds of times by himself.:

“[Lou] saw a problem and he fixed it, and he built a community around himself and the bell to address it,” she said.

It was easy to see the Honor Bell was Olivera's passion, but few knew of the pain he held inside.

PTS, short for post-traumatic stress, is an adaptive response to experiencing a stressful event, commonly referred to as a "fight-or-flight" response.

“At first when he passed, for me, I didn’t want to say it,” Mallin said. “But then I realized within the community we work and travel that we can’t hide it.”

As more than 6,000 veterans do every year, Lou Olivera took his own life.

“Hiding that that’s the way he went was not doing a service to anybody else,” Mallin said.

Silence was no way to honor Olivera. His dream lives on without him, day after day at Fort Logan National Cemetery.

For each veteran lost, a team will carry on his mission. They’ll toll the Honor Bell for all who served and make sure it’s loud enough for Lou.

“He gets to hear that bell toll every day,” Mallin said. “Lou hears it every time.”