Strasburg questions its fire board after emergency vehicles break down

Ambulances and fire truck broke down, so focus shifted to the fire board - which includes the man with the maintenance contract.

STRASBURG, Colo. — Oscar Holgiun doesn’t remember the moment in early August when he broke his shoulder, but he’ll never forget the ride to the hospital.

Holguin, 13, blacked out when his family's truck rolled on a country road near Strasburg. He came to a few moments after.

Oscar was with his sister, her boyfriend and his two brothers. They had gone to visit a family friend. Oscar's mother, Marisol Silva, said her daughter’s boyfriend thought he saw something in the road, swerved, and rolled the truck.

“My brother and my sister say that I was like passed out on the floor just outside of the truck,” Holguin said. “I just remember waking up, sitting in the back of the truck, and then just like in the far distance just lights and sirens.”

An ambulance from the Strasburg Fire Department responded to the scene, along with the Arapahoe County Sheriff and the Colorado State Patrol.

According to radio traffic of the incident, paramedics on scene determined Holguin injured his shoulder and may have had a concussion. After consulting with hospitals, first responders decided to put Holguin and his two brothers in an ambulance headed to Children’s Hospital. His sister and her boyfriend were in a separate ambulance to UCHealth Medical Center in Aurora.

Silva met her daughter and her boyfriend at UC Health Medical Center. She said Holguin’s father went to meet the boys at Children’s. He was surprised that they hadn’t arrived.

“I just felt the ambulance slowing down, and I didn’t know what was happening,” Holguin remembers of that day.

According to radio traffic obtained by 9NEWS, the Strasburg Fire Ambulance broke down on I-70 near mile marker 313, not far away from the crash scene off of Calhoun Byers Road. Over the radio, the Strasburg Fire paramedic called for the nearest ambulance to transfer the patients, then asks for a chief level officer and a tow truck.

The radio traffic goes on to detail an elaborate transfer of the patients. Police closed a lane of the highway and dispatched calls for a fire truck to provide an extra blockade for traffic.

Eventually, Holguin and his brothers are transferred to the other ambulance and taken to Children’s Hospital.

“I think when I called my son is when he told me the ambulance broke down, but I mean at that moment I didn’t think of anything because I just wanted to see my boys,” Silva said.

After she realized they were okay, she reflected more on what just happened.

“I thank God my kids are okay, but if they weren’t, what would have happened?” she asked.

Over the radio, on that day of the breakdown, a member of Strasburg Fire offers the paramedic that he could bring another Strasburg ambulance to assist.

“That’s a negative,” paramedic Jon Calton replied over the radio. “It’ll probably go out of service-mechanical.”

In a way, he predicted the future.

Two days later, the other ambulance, Medic 81, helped transfer a chest pain patient to UC Health Medical Center. According to the radio traffic from that day, Medic 81 died in the ambulance bay of the hospital after the patient was transported.

"How do I justify this to my public, to my patients who are sitting on the side of the highway?” Calton questioned at the last Strasburg Fire Protection District Board meeting on August 15.

Those weren’t the only times in recent memory that vehicles failed for Calton.

At the same meeting, he detailed a recent car fire, where he was dispatched with a brush engine.

Radio traffic of that incident, also obtained by 9NEWS, shows Calton was the first firefighter on scene at a scrapyard. He radioed back that a car and tires were on fire.

“I’m having pump trouble right now,” Calton said over his radio. “I’m waiting for the next unit to start putting water on it.”

“I was the first unit on scene for nine minutes,” Calton later told board members. “[I] couldn’t put a drop of water on the fire.”

“I want answers,” he said. “Why are these rigs breaking down on such a consistent basis?”

“As far as the breakdowns, I don’t know what happened to them, but it doesn’t sound like either of them were a maintenance thing,” Sherer responded to Calton at the meeting.

Sherer insisted none of the breakdowns had anything to do with the service his shop did on the vehicles. The ambulance carrying Oscar suffered a catastrophic failure of the fuel pump, which Sherer said has nothing to do with maintenance.

The questions to Sherer come amid intense public scrutiny of his shop’s contract with Strasburg Fire. Earlier this year, a citizen’s group led by a volunteer Strasburg firefighter and paramedic began asking questions about the contract.

After 9NEWS questioned him about the contract, Sherer confirmed he will not bid on it again this year.

While Sherer has served as an elected member of the fire board for nearly a decade, his business has worked on Strasburg vehicles for at least 20 years, he said.

“It’s been a small-town community service,” Sherer told 9NEWS. “We’ve just been doing it for so long it wasn’t ever really a question to anybody.”

Each year, the Strasburg Fire Protection District places an advertisement in the local paper seeking bids for a vehicle maintenance contract.

A review of bids on that contract dating back to 2015 showed at least two other entities placed bids against Sherer’s Sherer Auto Parts.

Those bids were defeated by Sherer’s shop, which provides a one to two paragraph bid only detailing pricing for parts and labor.

Competing bids appear to stop in 2017. Sherer’s shop has been the lone bidder for the last two contracts. The bid in 2018 was a paragraph long.

The Special Districts Act, which governs the Strasburg Fire Protection District, discourages board members from doing business with their district, but doesn’t necessarily ban the practice.

“You know there aren’t a lot of shops that do the big trucks in our area – that’s kind of what we’ve done and we’ve done it for so long,” he said.

Minutes of Strasburg Fire Board meetings dating back to 2016, show some concerns from Strasburg fire crews about Sherer’s maintenance of the vehicles, questioning whether Sherer has a mechanic certified by the National Fire Protection Association.

Sherer admitted he doesn’t have an NFPA mechanic on staff, though his shop has a certified diesel mechanic who works on school buses. 9NEWS reached out to the Strasburg School district to confirm Sherer’s work, but the district never responded.

“We just work on the chassis. Those all go to a certified shop.” 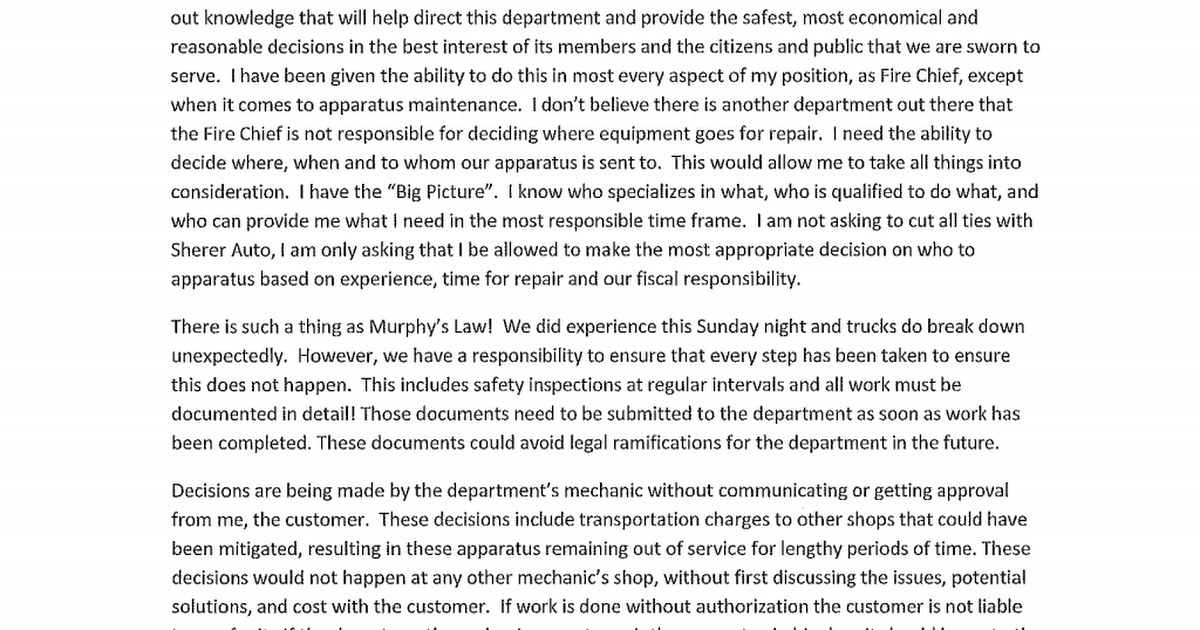 “Decisions are being made by the department’s mechanic without communicating or getting approval from me, the customer,” Fields’ letter said.

The letter criticizes Sherer’s lack of preventative maintenance plans for department vehicles, criticizes Sherer’s Auto Parts for using aftermarket parts on an ambulance that later broke, and charging transportation fees to take the vehicles to other shops to get qualified work done.

“We haven’t had that complaint until we had this particular fire chief,” Sherer said of Fields’ complaints.

All other fire districts along the I-70 corridor take their vehicles to Bennet-Watkins Fire for service. That department has an NFPA-certified mechanic on staff and creates a preventative maintenance plan for each department’s vehicles.

According to documents submitted during a bid in 2016 to Strasburg, Bennett Fire charged a similar price for the same service Sherer provided.

Since the Bennett Fire Department isn’t a private business, their leadership told us they do not necessarily bid on a contract, they only seek an inter-governmental agreement to do the work.

“All I can tell you is the [request for proposal (RFP)] was put out and we were the only one who bid on it,” Sherer told 9NEWS. “And I didn’t vote on it but the rest of the board did.”

Bennett Fire didn’t respond to Strasburg’s RFP in 2017 or 2018, according to records obtained by 9NEWS.

“All of our rates went up…and a lot of or pricing is done with a flat rate that comes out of a computer program,” Sherer said. “But you have to realize that per hour is not a good way to judge the cost because you can charge a less amount more hours and actually cost more money than a big amount with less hours charged.”

“That was probably, you know, not the way we should have done that but like I said our whole rate structure went up that year,” he said.

It’s hard to determine whether the cost is still lower than competitors because Sherer’s shop hasn’t billed the Strasburg Fire Department for work this year. Sherer said his shop has done one or two jobs for the department.

The lack of bills should raise serious questions, according to Brad Jones, a volunteer firefighter and paramedic in Strasburg, who created Friends of Strasburg Fire, a citizen’s group challenging the fire board.

Jones has questioned Sherer’s billing practices since the group started, pointing to an invoice from Sherer’s shop for more than $12,000 that does not itemize what maintenance was completed.

Credit: 9NEWS
An invoice from Sherer’s shop for more than $12,000 that does not itemize what maintenance was completed.

“The situation with board president Donny Sherer and the vehicle maintenance contract with the district is the worst kept secret in Strasburg,” Jones said.

“He is not just a member of the board but the president of the board, and so part of his job, a huge part of the job of the board is to oversee the responsible expenditure of public money, but when he’s on the receiving end of those expenses - that‘s a conflict of interest,’ he said.

Jones recently started attending meetings and confronting the board during public comment. He also videotapes the meetings.

“I do want him held accountable,” he said.

Sherer told 9NEWS he doesn’t plan to submit a bid for the next contract.

“I haven’t profited a lot from the fire district, no matter what people are putting out, I’ve done it as a service and after everything that’s been said about me, they’ve dogged my company, my employees, myself and that just, I will not do it again,” he said.

Sherer also said he won’t run for another term when his term expires in 2022.

Sherer said he believes the criticism comes as the district starts to grow and the people who live nearby expect a different kind of service from their fire department.

“I just put my heart and soul into this district and it makes me sad,” he said.

“I’m happy to hear Mr. Sherer is not going to be doing the work moving forward primarily because he’s not qualified to do the work,” Jones said. “However, this doesn’t change the fact that the district has paid tens of thousands of dollars over the years to him.”