New study from the Annals of Internal Medicine shows hearts attacks are killing triathletes during the race. 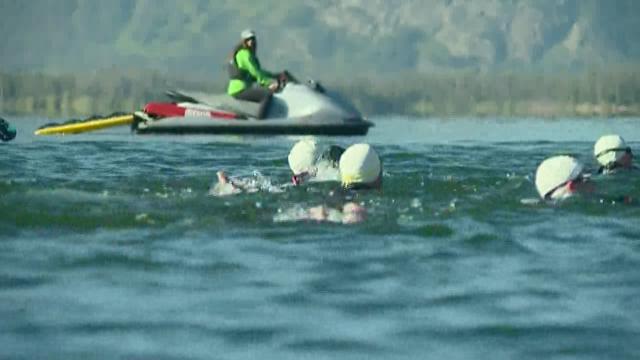 A new study is highlighting the dangers of competing in triathlons.

The Annals of Internal Medicine study shows 135 people have died from sudden heart attacks during triathlons in U.S. from 1985 to 2016.

We spoke with emergency room doctor, Comilla Sasson and the President and coach of the Rocky Mountain Triathlon Club, Charles Perez.

Both say simply not warming up properly is putting extra strain on competitors hearts.
"It's very easy to get anaerobic without even having done any kind of warm up and that's going to be a big issue right there because your heart starts racing," said Perez.

Dr. Sasson added, When you're in the aerobic zone your heart is the most efficient that it will be. You're pumping blood just to make sure you're getting enough blood to your muscles and vital organs. When you go into that anaerobic threshold, your heart is on overdrive, right, you're trying to get blood the most vital organs at that point so you're just kind of hitting the ground running really, really hard and if you don't do a proper warm up that really puts a huge strain on that heart."

Researchers say in men, the risk increased substantially with age and was much greater for those aged 60 years and older.

According to the New England Journal of Medicine, editorialists who looked at the research wrote, "Although pre-participation screening may not be popular in this older group of athletes, education (especially men older than 40 years) about the signs and symptoms of cardiovascular disease (including the use of performance-enhancing drugs) and the need for proper medical attention is warranted."

Perez agreed, "If you're over 40 it's not a bad idea to have some sort of physical before you start training for something, an endurance event of any kind."

Dr. Sasson recommended participants get that check up to start, but also suggested they schedule follow up appointments throughout their training because someone who is in good physical condition, and has been participating in endurance events for several years can still be at risk for heart issues.

"The thing that is hard about heart disease is that it's really, truly the silent killer. You don't know if you've got hardening of those heart arteries until you have an event - something like a triathlon when you're exerting your body to the highest level. It's really a stress test in some ways," she said.

Perez was one of those athletes.
He had been participating in endurance races for 20 plus years when he developed Supraventricular Tachycardia.

He had to have surgery in 2001.
Fortunately he recovered and was able to continue doing triathlons.

He has advice for anyone who just isn't feeling right during a race or exercise.

"One thing about us, once we get over 40, is we start to get into denial very, very quickly. I know myself that was very true. When I first started noticing these heart arrhythmias I was in total denial this can't be true - I've been running my whole life and there's no way I can be having any sort of heart issues," he said. "It took a long time before I finally went into the doc and had it checked out and went to a heart specialist and they told me exactly what I had and gave me some options on what I could do for it."

Heart issues often don't have symptoms and can appear suddenly.
Doctors say feeling dizzy or light-headed, a shortness of breath, chest pains and a rapid heartbeat could be signs of heart issues.

The American Heart Association's website has extensive details on the signs and symptoms of different types of heart conditions, what can be risk factors, and how you can help prevent heart disease.