'I did not sexually assault anyone': 4 months after the initial allegation, no charges have been filed against Tay Anderson

Denver Public Schools Board Director Tay Anderson gave 9NEWS an exclusive interview to discuss the anonymous allegations made against him. 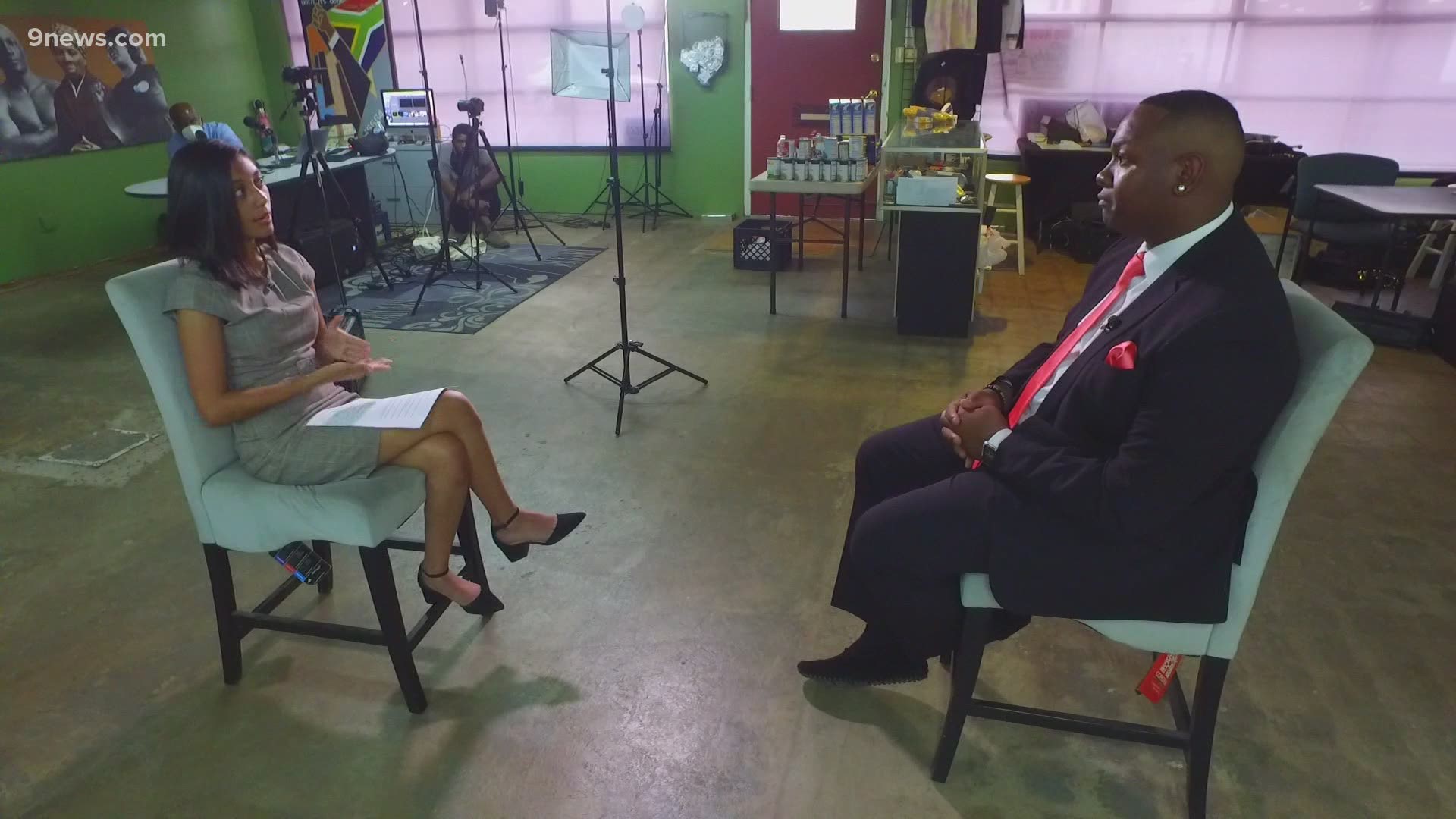 DENVER — Nearly two years after being elected to the Denver Public School Board at 21-years-old, Director Tay Anderson is at the center of a controversy that has him fighting for his political career.

On Wednesday, Anderson announced he was resuming his duties on the school board after stepping back in June amid an investigation launched in early April into sexual assault allegations made against him.

After announcing his return to the board, Anderson sat down with 9NEWS to discuss the anonymous allegations made against him.

Anderson said he found out about the initial allegation the same way the rest of the community did -- through social media, when Black Lives Matter 5280 released a statement that said a woman had come forward to them and named Anderson as the perpetrator of her sexual assault.

"This was informing the public and informing me at the same time, but I would think that we would have more common respect for each other whether if we agree or disagree on how we handle these serious allegations," Anderson said. "I would at least expect us to have come together and for me to have prior knowledge and not find out via social media."

Watch the full interview with Anderson below.

Warning: Topics of sexual assault, suicide and mental health struggles are discussed in this interview.

In May, a woman named Mary-Katherine Brooks Fleming testified at the state capitol for a child sexual abuse accountability bill. In her testimony, she said 62 current and former DPS students contacted her directly about concerns over someone who was targeting DPS children. She said all of the students listed offenses from unwanted touching to rape. DPS board members were later informed she was referring to Anderson.

Anderson said he met Brooks Flemming in the summer of 2020, during the height of Black Lives Matter protests. Brooks Flemming led a group called "Wall of Moms" that protected protesters.

"Up until now, we’ve had a solid relationship, of being able to show up and share spaces and protest in the same areas and spaces without any issues," he said.

Anderson could not say when their relationship took a turn. He said they stopped communicating after the initial allegation had emerged.

"In her testimony, she said these people started arriving in August, but when I go back to you know public statements she’s made about me in late October, she called me a hero, someone that was a champion for her kids and her protest kids," Anderson said.

Brooks Fleming also said most of the alleged victims were in the country under the Deferred Action for Childhood Arrivals program (DACA).

Anderson said DPS employees do not have access to the nationality status of any of their students. The DPS Immigration policy outlines they "do not ask for students’ immigration status when they enroll."

"I am just taken aback that anybody would say 62 undocumented folks have went to them knowing that simply cannot be tracked to be true," Anderson said.

When asked about Anderson's relationship with the alleged victim who came forward to BLM5280, he said he had no prior interactions with the individual.

"I have only interacted I think once through protest basis at a very public space, however, I was surprised and taken back because I even went through every social media channel I had seeing if there was any communication, seeing if we would’ve ever crossed paths, we haven’t."

"Comments are definitely said, we played truth or dare as teenagers, we played never have I ever as teenagers, but nothing that would’ve ever arose to the account of sexual assault by any regards and my colleagues didn’t even mention that in their letter when they wrote an open letter to me saying this is the space that you facilitated that made us feel unsafe or uncomfortable," he said.

Anderson said he resigned and apologized for his behavior in 2018 when the Never Again Colorado board members brought their concerns to him. "It was brought to me again in 2021, I apologized, because I have done everything I can to account for my sins as a teenager when I know that necessarily not every comment is appropriate, I’ve learned, I’ve had a lot of growth."

Anderson said he, his friends, and family have received threats and hateful messages since the allegations surfaced.

"I shouldn’t have to spend once a week at Denver Police reporting a new threat and that’s been my life for the last four months, due to these allegations." Since taking his position on the school board, Anderson said he was used to receiving criticism from people with different views and ideologies.

"I didn’t run for office for everybody to like me, I ran to serve kids...it’s one thing to criticize an elected official and it’s another to say that you want to hurt their family or to hurt them," he said.

Anderson said his quick transition from DPS student to employee, then elected official came with a lot of public scrutiny.

When asked if Anderson felt supported by his fellow board members, he said no. "Since day one it’s been guilty until proven otherwise, we have to be able to understand the standard is innocent until proven guilty," he said.

Many of the stances that some may see as controversial, Anderson says they were not all that controversial between him and other board members.

"Every vote but one has been unanimous so I would not just start with Tay Anderson, I’d ask your other school board members why are they supporting this vision and most of them will tell you it’s because it’s what’s best for kids," he said.

A few examples of those agenda items, according to Anderson include:

"A lot of the changes that we made have been monumental, from tampons in schools, to having gender neutral bathrooms, to now being taught your history, students are able to see the fruit of the labor that we have put in for them," he said.

RELATED: Tay Anderson returns to DPS board amid investigation into sexual misconduct allegations

The DPS Board of Education is investing $50,000 into this investigation. Anderson said he does not believe investigators will find any evidence that he sexually assaulted someone.