Kaden Piel said he wants to raise awareness about how taking away sports and activities can contribute to feelings of isolation. 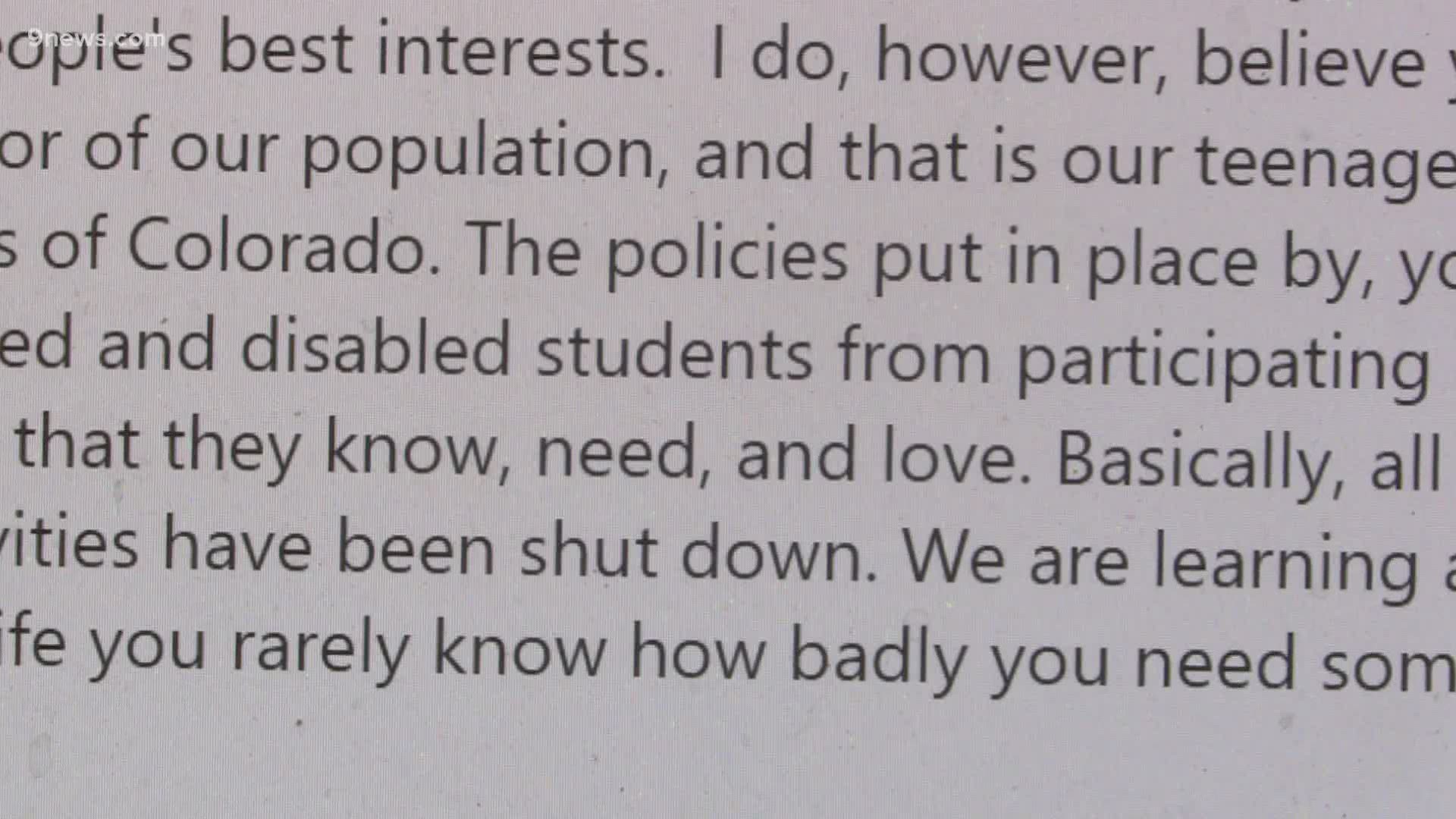 MERINO, Colorado — Since the COVID-19 pandemic began, there have been few opportunities for teenagers to play sports, gather for clubs or play music.

A 15-year-old said he believes that has a bigger impact than some people may realize.

"Every time I hear the word suicide, I just, like a pit forms in the bottom of my stomach," Kaden Piel said.

He is a freshman at Merino High School in northeast Colorado, just south of Sterling. On his Facebook page, Kaden posted an open letter to Gov. Jard Polis (D-Colorado) telling him about seven teen suicides in his area since the pandemic started.

"I realized I have to do something about this," Kaden wrote.

Kaden said he believes when COVID-19 restrictions eliminate activities like sports and clubs, it makes a difference that can be more deadly than the virus for teens.

"When all of kids' activities are taken away from them, they feel literally like they have nothing to live for," Kaden said.

RELATED: High school sports pushed back due to coronavirus concerns

"I was an all-time low this summer, but participating in football, like, I've never felt so happy, so energetic," Kaden said.

Chris Weiss is the executive director of the Second Wind Fund, a nonprofit dedicated to ending teen suicide. For years, Colorado has ranked high for teen suicide rates compared to the rest of the country.

RELATED: How to talk to your teen about suicide

"The question that Second Wind Fund always has even before COVID is how do we reach at-risk youth who need our help?" Weiss said.

Weiss said he is concerned about rural areas like Merino that don't have the same types of resources available for teens in metropolitan areas.

"The restrictions with COVID have had an impact," Weiss said. "Isolation is a key contributor to suicide and anytime that lock downs are put in place, we want to make sure a youth still has access to their networks, to their communities, to their sports teams, to their clubs."

Kaden's said he hopes to raise awareness with his letter to the Governor. He said he didn't expect Polis to respond to the letter during his press conference Friday.

"I think it's wonderful that you have a young leader there in Merino that is helping to lead the way in talking about the mental health benefit of kids being in school," Polis said.

Polis was asked about Kaden's letter and he said that he plans to answer it.

"I hope the young man is successful in getting activities back in eastern Colorado and across our state," Polis said. "I would encourage more students to join in really talking about what school and what those activities mean to them."

Kaden said he could not believe Polis talked about him.

"Me, I was like, 'oh my goodness.' he said. "People are actually listening to what we're saying like people care what we think. I think as a kid who didn't feel like that -- it helps."

Kaden has started his own social media movement called #FightTheFunk. He said he wants other teens to use his hashtag to share stories of their ways of "fighting their own funk" during the pandemic.

He wants to keep teens from turning to suicide.