The shooting happened in April. The suspect eventually took his own life during a standoff. 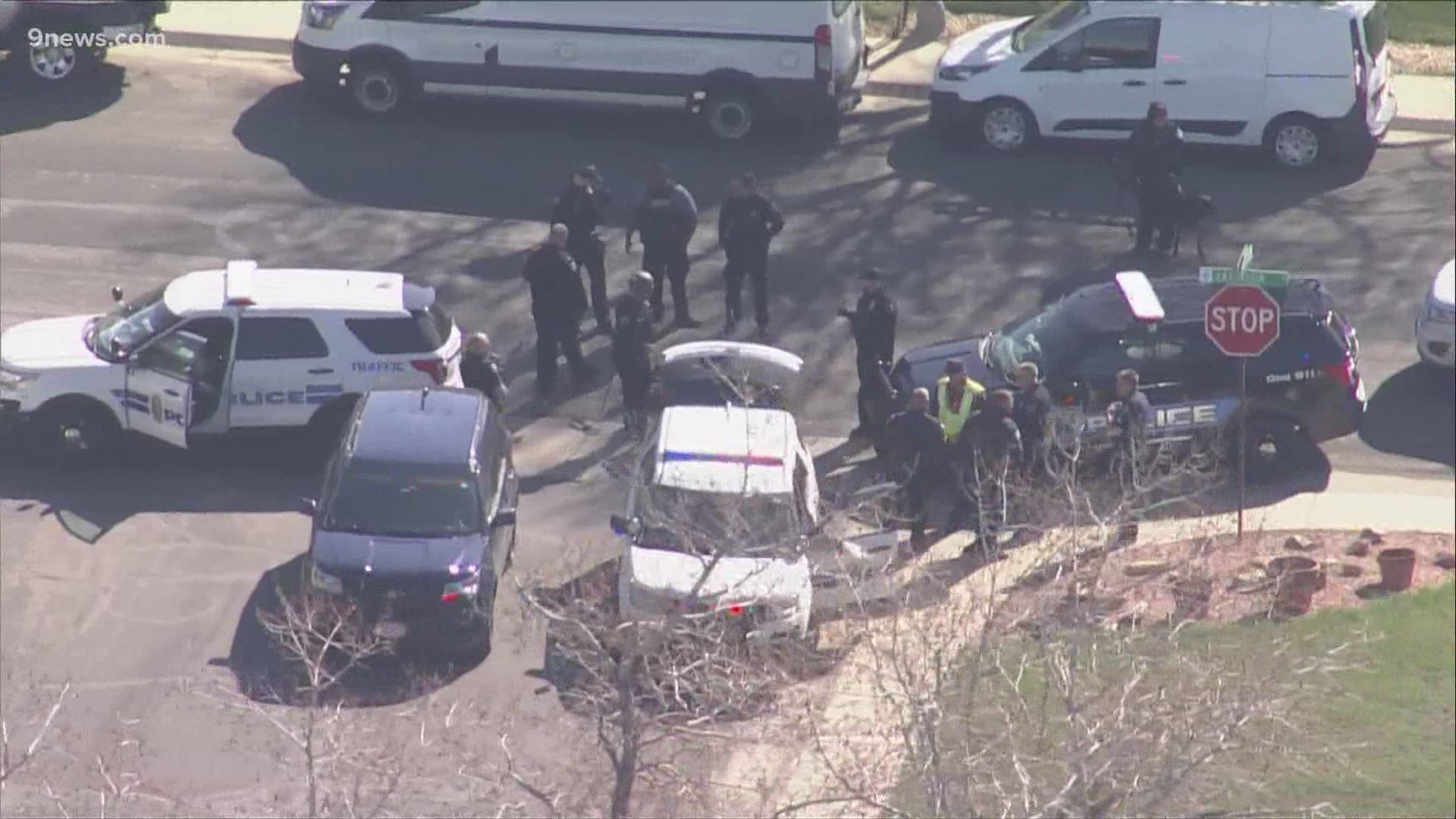 On April 9, Thornton police officers responded to the Reserve apartment complex at 9700 Welby Road for a report of a trespasser.

The person who called police was a security officer employed by the complex. He told officers about several recent coin thefts from the laundry room. On that day, the security officer encountered the suspect, who carried a backpack and wore a black hooded sweatshirt with the hood pulled up onto his head.

The security officer told police he feared for his life during the encounter.

Acting upon instinct, the security officer swatted away the gun and ordered the suspect to leave.

The suspect again pointed the gun at the man and ran from the laundry room.

While officers were still at the scene, they encountered a man who fit the description of the suspect. An officer ordered the man to keep his hands out of his pockets, but the man refused and ran away.

As the officer gave chase, the suspect turned around and pointed a gun at the officer, investigators found.

The suspect yelled, “Better back off, f---er," according to the investigation.

Thornton police officer Zac Crowe saw the gun pointed at him and took cover between vehicles parked in the parking lot to avoid being shot.

Crowe later said, “I thought he was gonna shoot me, and, being at the distance, and me running, it – I was – I was honestly fear – in fear for my life just because the distance and at that point. He had his gun out; I did not have my gun out. And I was in – in the wide open.”

The suspect jumped into a car and drove out of the parking lot.

Multiple officers chased the suspect out of the apartment complex and northbound on Colorado Boulevard.

The suspect eluded officers at a high speed and ultimately crashed the car into a fence near the intersection of East 115th Avenue and Colorado Boulevard.

Officers Hinton and Lindsay Crowe were the first officers to arrive at the crash scene. They parked their patrol cars surrounding the car on Colorado Boulevard as traffic continued passing by.

Credit: 17th Judicial District
Image of the Nissan Maxima crashed into a fence near the intersection of East 115th Avenue and Colorado Boulevard.

Crowe and Hinton got out of their patrol cars with their guns drawn at the suspect car.

The officers gave repeated verbal commands to the suspect to get out of the car and to show his hands. The suspect emerged from the car and stood on top of the hood.

Both officers saw the suspect holding the handgun in his right hand. Hinton yelled, “He’s got a gun!” Within seconds, both officers fired their weapons at the suspect.

The officers later said they feared for their lives and the lives of others who were in the area.

The gunshots appeared to miss the suspect, as he jumped over the fence.

The officers followed the suspect and saw him continue to run with the gun in his hand, the DA's office said. The officers set up a perimeter to locate the suspect, but lost sight of him.

A nearby homeowner called 911 to report that the suspect entered her home and said that he was injured and needed help.

He pointed a gun at her and demanded her car and car keys. She refused and the suspect eventually ran away.

Credit: 17th Judicial Disctrict
Image from an officer's body-worn camera of the suspect running with a gun.

While searching the area, officers saw damage and evidence of forcible entry to a nearby home. Various items were taken from the home, including keys to a Jeep, the DA's office said.

The Jeep was stolen from the garage and later recovered seven miles away with no sign of the suspect.

Crime scene investigation inside the home revealed fingerprints that identified Raymond Quintana, 36, as the suspect.

Quintana was also identified as the suspect in a Denver crime that occurred on March 3, where he crashed into a police vehicle while driving a tan Nissan Maxima.

This car was discovered to be the same car that the suspect entered after pointing the handgun at Crowe during the encounter.

On April 14, Quintana was located at an apartment in Westminster. After several hours of negotiations with law enforcement, Quintana took his own life, the DA's office said.

An autopsy of his body revealed evidence of a non-lethal perforating gunshot wound to Quintana’s leg that was consistent with the events from April 9.

After an investigation, the DA's office determined it can't be proven that the officers involved were not justified in the shooting.

The district attorney's office concluded the officers did not immediately use force and only did so when Quintana escalated the situation. Furthermore, the officers had a right to defend themselves from harm.

The full legal analysis and conclusion are below:

As was previously noted, this review is limited to a determination of whether criminal charges should be filed against the involved officers. The decision to file criminal charges involves an assessment of all known facts and circumstances as well as an evaluation of whether there is a reasonable likelihood of conviction at trial under the applicable law. Criminal liability is established when the evidence is sufficient to prove all of the elements of a crime beyond a reasonable doubt. In addition to proving the elements of a crime, the prosecution must also disprove any statutorily recognized justification or defense beyond a reasonable doubt. Consequently, in order to file a criminal charge, the District Attorney’s Office must be able to prove beyond a reasonable doubt that the involved law enforcement officer’s actions were not justified under the circumstances surrounding this incident and the applicable law.

Here, both Officers Crowe and Hinton discharged their firearms at Mr. Quintana as he got out of the vehicle and approached the fence. It is unclear whether Mr. Quintana was struck by the gunfire. However, the evidence suggests that he reported being injured shortly after the incident. In addition, at the time of Mr. Quintana’s death, he appeared to have a nonfatal gunshot wound to his leg. Therefore, for purposes of this legal analysis, it is assumed that either Officer Crowe or Officer Hinton shot Mr. Quintana in the leg. The legal question is whether these two involved officers’ conduct supports the filing of criminal charges.

Under Colorado law, a law enforcement officer may use an amount of force that is necessary and reasonable to effect an arrest. Additionally, under Colorado law, police officers, like any other individual, have the right to defend themselves or others from the use or imminent use of unlawful physical force. An officer’s right to use reasonable force is an affirmative defense, meaning that the prosecution must prove beyond a reasonable doubt that the use of force was not justified. The affirmative defenses applicable to the officers’ use of force at the time of this incident is found under §18-1-707, C.R.S. (2020). The pertinent language of the statute reads as follows:

The legal definition of “deadly physical force” as contemplated by the use of force statute cited above means “force, the intended, natural, and probable consequence of which is to produce death, and which does, in fact, produce death.” While the force here did not produce death, this analysis evaluates the discharge of a firearm that has the potential to cause death.

In the 1989 case of Graham v. Connor, the United States Supreme Court set forth a “reasonableness standard” in evaluating the use of force by a police officer. Under this standard, the inquiry into the appropriateness of an officer’s use of force must (1) take into consideration the totality of the circumstances, including factors such as the severity of the crime at issue, whether the suspect poses an immediate threat to the safety of the officers or others, and whether the suspect is actively resisting arrest or attempting to evade arrest by flight; and (2) be judged from the perspective of an objectively reasonable officer on the scene “in light of the facts and circumstances confronting them, without regard to [his] underlying intent or motivation.” Further, the United States Supreme Court noted, “[t]he calculus of reasonableness must embody allowance for the fact that police officers are often forced to make split-second judgments—in circumstances that are tense, uncertain, and rapidly evolving—about the amount of force that is necessary in a particular situation.”

In this case, the involved police officers were initially engaged in the course of their duties to search for and apprehend a suspected coin thief who threatened a security guard with a handgun. Despite being advised that Mr. Quintana was armed with a deadly weapon, Officer Crowe’s first attempt to contact Mr. Quintana was non-violent and involved a minimization of injury to others. However, Mr. Quintana quickly escalated the encounter when he again displayed the handgun and threatened to use it against Officer Crowe. Consequently, the officers’ pursuit of Mr. Quintana was for multiple felonies involving conduct including the use or threatened use of deadly physical force.

The continued pursuit of Mr. Quintana proved to demonstrate that he would use any means possible to evade police. He eluded officers in a highly traveled area of Thornton at a high rate of speed and crashed his vehicle into a fence. At the crash scene, the officers made every reasonable effort to safely contact Mr. Quintana without injury to others. The officers were clearly identified as police officers by their uniforms and their associated marked police vehicles. Both officers gave him repeated commands to Mr. Quintana to exit the vehicle and drop his weapon. However, Mr. Quintana continued to disobey the Officers' reasonable requests to drop the weapon and show his hands.

The officers did not immediately resort to the use of force. On the contrary, the officers gave Mr. Quintana repeated opportunities to resolve the situation without violence. Mr. Quintana persisted in his effort to evade apprehension while armed with a handgun. When Mr. Quintana turned his gun towards Officer Hinton, he posed an immediate threat to Officer Hinton or any other person traveling along Colorado Boulevard. Officer Crowe and Officer Hinton both stated that they discharged their firearms fearing that Officer Hinton's life and the lives of citizens in the area were in danger if they failed to take action. Given the evidence, the prosecution cannot prove that the officers' actions were not justified in this incident.

Under the totality of the circumstances and evidence gathered in this investigation, the prosecution cannot prove that the involved officers were not justified in using reasonable force under *18-1-707, C.R.S. (2020). Therefore, applying the facts of this incident to the applicable law, the evidence does not support the filing of criminal charges against Officer Zachary Crowe and Officer Lindsay Hinton for firing their weapons at Mr. Raymond Quintana.

RELATED: Suspects chased down student as he ran for his life, affidavit says