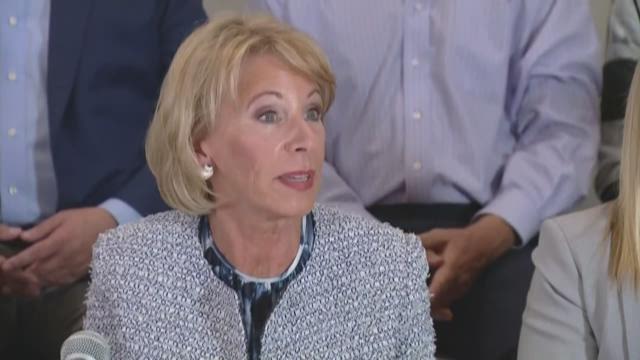 U.S. Education Secretary Betsy DeVos will be at Firefly Autism House in Denver today to pitch her “Rethink School” campaign.

That will continue to a roundtable discussion with Firefly staff, after which she plans to take questions from the media.

DeVos kicked off her tour of western and mid-western states Tuesday at Woods Learning Center in Casper, Wyoming.

DeVos lauded the school as an example of a program rethinking the standard educational model.

According to the Department of Education, the school doesn’t have a principal, but operates on a collaboration of teachers and researchers.

The school had scores “basic” or “below basic” at rates higher than the state average in the other seven categories.

Devos began her comments saying there’s “no such thing” as the education system, asking the Woods’ students, “Are you guys systems?”

“No school… is a perfect fit for every student,” DeVos said, “Schools must be organized by the needs of students. Not the other way around.”

DeVos has been a vocal proponent of school choice, the idea that parents should have more freedom to choose which schools their children attend, sometimes with vouchers for private or religious schools.

“Students, your parents know you best. They are in the best position to select the best learning environment for you,” she told the crowd of WLC students.

Asked by a student how she plans to rethink school, DeVos said she would instead try to empower teachers and school leaders to do that.

“Too many [teachers] feel like their hands are tied when the system tells them when to teach, how to teach and what to teach,” DeVos said.

She says she thinks teachers should have more freedom to be innovative. She says that’s hampered by “defenders of the status quo.”

She cited a private school in Austin, Texas, a charter-school in Dearborn, Michigan, as well as home-school co-ops as good examples of schools doing things differently.

Wednesday evening, she will tour Midland University in Omaha, Nebraska.

She also plans to visit schools in Missouri and Indiana through Friday.