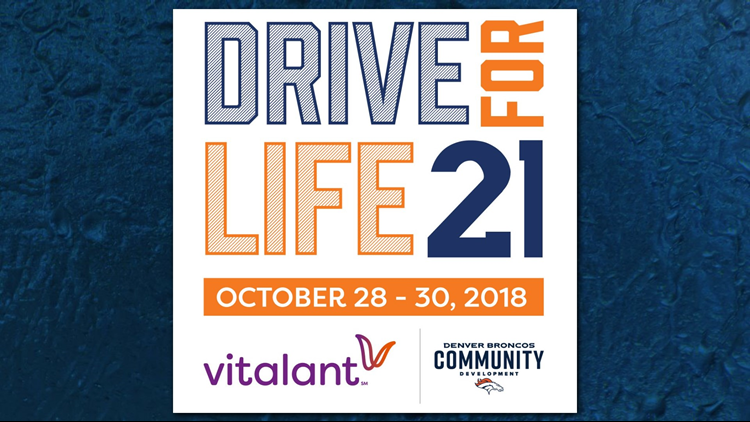 Vitalant, Broncos have a new game plan for Drive for Life 21

Vitalant, previously known as Bonfils Blood Center, has announced a new game plan for Drive for Life, its signature blood drive with the Denver Broncos.

Vitalant says Drive for Life, which was held for one day at Broncos Stadium at Mile High, will now be a three-day blood drive at all of Vitalant's donation centers along Colorado's Front Range.

Vitalant says that everyone who comes to give blood at any of its donation centers during regular operating hours any of the three days will be entered to win Broncos-themed prizes and receive a goody bag including a commemorative T-shirt, lapel pin and a Bradley Chubb laser-signed photo.

Also, on the days seen below, some Vitalant centers will have "an extra celebratory feel" which could include the chance to meet Broncos alumni, cheerleaders, active players and/or Miles the Mascot.

The Lowry donation center will also have food, games and entertainment on Tuesday, October 30 from 7 a.m. – 7 p.m.

“Drive for Life is a longstanding tradition in Colorado and we’re excited to bring the fun atmosphere into our donation centers and make it more accessible to more Broncos fans across the Front Range,” Vitalant Senior Director of Donor Recruitment Charlie Propernick said, in a news release. “We’re grateful to the Denver Broncos for their ongoing support engaging the community to transform lives with us.”

“The Denver Broncos are very excited for the enhancements to this year’s event, which will now become the largest three-day community blood drive in Colorado,” Denver Broncos’ Executive Director of Community Development Allie Pisching said, in a news release. “Drive for Life has had an incredible impact through blood donations collected over the last 20 years, and our partnership with Vitalant plays a key role in the Broncos’ mission of improving lives in our community.”