The last time the Tennessee Volunteers canceled a football season, the world was at war. Schools tried just about anything to save the 1943 season before giving up. 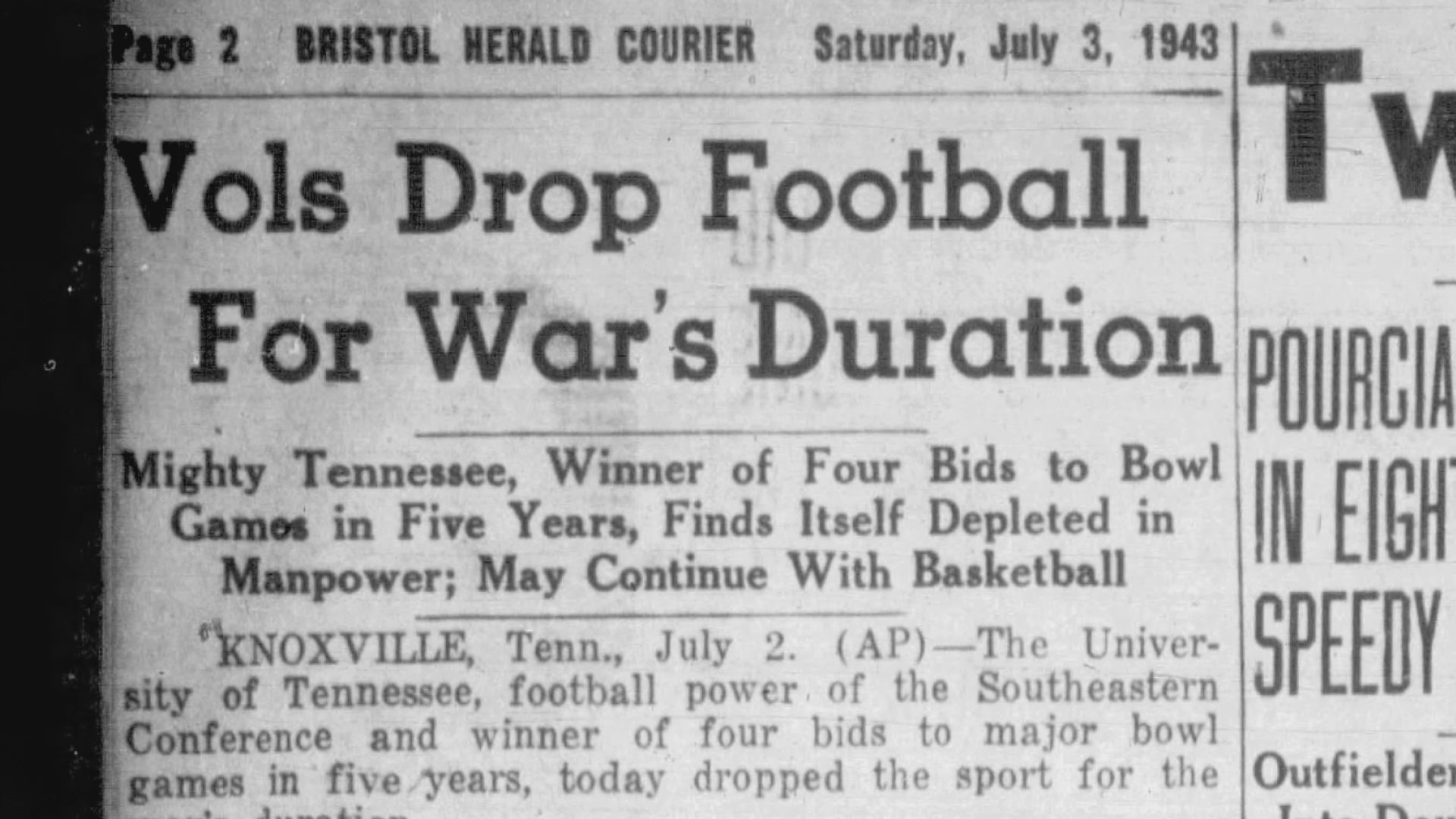 KNOXVILLE, Tenn. — The last time the University of Tennessee canceled a football season, people were fighting for their lives around the world.  But the multi-million dollar college football industry in 1943 was not quick to give up on playing games.

Tennessee built a football powerhouse in the late-1930s and early 1940s under head coach Robert Neyland.  In the days when bowl games were far more scarce, the Vols went to four bowls in five years and claimed a national championship.

In 1941, the growing threat of war took a toll on the UT roster.  Major Robert Neyland was called back into active duty service in May 1941.  A few players, including football and track star Willis Tucker, were called by Uncle Sam to serve in the military.

This was all several months before Japan attacked Pearl Harbor in December 1941 and sent the United States fully into World War II.

Even after the attack on Pearl Harbor in 1941, the 1942 college football season went ahead as planned.  Tennessee ended the season by winning the Sugar Bowl against Tulsa.

A month after the bowl win, the U.S. Army shook the college football landscape by announcing it would take over the classrooms and sports facilities at 271 college campuses. The schools included the homes of big-time college football and entire rosters of college-aged men were sent overseas to fight.

Even with rosters wiped out, coaches and conferences refused to quickly surrender the football season.  Southeastern Conference leaders came up with anything they could, including allowing 18-year-old freshmen not quite at fighting age to play varsity. At that point, freshmen were not allowed to play varsity.

Credit: WBIR
June 28, 1943, article noting the SEC approved a plan to allow any service member to play college sports, even if they exhausted eligibility and played pro sports.

On June 28, 1943, the SEC bigwigs gave the green light to an idea far more extreme.  The conference would give any member of the armed forces unlimited athletic eligibility for the fall and winter.  That included servicemen who had already used all of their college eligibility and played professional sports.  The teams needed players wherever they could get them.

After a few more days of grasping at nonsensical ideas, the writing was on the wall.  The University of Tennessee's athletic council voted unanimously to suspend football for the duration of the war. There would be no season in 1943.  At that point, six other SEC schools had already canceled their seasons.

Five SEC schools continued to play football in 1943, mostly against a patchwork of smaller schools.  Two SEC members at the time, Georgia Tech and Tulane, had Navy units on campus with plenty of cadets to field a team.

Sports fans did not have to wait for the conclusion of the war for their next taste of college football.  In February 1944, Tennessee and around 300 schools announced they would resume gridiron duties in the fall.

Tennessee went undefeated in 1944 with seven wins and one tie, a 0-0 draw with Alabama.  The Vols ended the season with a trip to the Rose Bowl, where they were shut out 25-0 by Southern Cal in front of 90,000 fans.

It took a couple of years for the sport to truly get back to full strength as college players were released from military service.

By the 1946 season, the sport was physically stronger than ever.  In addition to the normal college-aged players, rosters were loaded with hard-hitting veterans in their mid-20s who were finally returning to campus after spending years at war.

Credit: WBIR
The lineup for a UNC Tennessee game in 1946 shows a roster full of players in their mid-20s.

College rosters in the late-1940s resembled NFL teams. The players were grown men. They were older, bigger, and stronger than the days before the war.  The G.I. Bill allowed returning veterans to attend school and subsequently try out for athletic teams. It was not uncommon for schools to have freshmen who were 26 years old.

The coach who returned to the helm at the University of Tennessee had been promoted to the rank of brigadier general. General Robert Neyland's teams continued their success on the field and claimed another national championship before he retired for good in the early-1950s.

While it was painful to lose football in 1943, the sport came back.  The same cannot be said for four former Vols.  Neyland Stadium prominently displays the names of four players killed in battle during World War II: Clyde "Ig" Fuson, Rudy Klarer, Bill Nowling, and Willis Tucker.

Sportswriter Tom Anderson with The Knoxville Journal noted the sadness when the 1943 season was canceled.  But he wrote shedding a tear for the temporary discontinuance of varsity football would "be making oneself ridiculous because one should realize that playing games through this gap is small potatoes, if any."  Of 59 young men eligible to play football going into the season at Tennessee, 57 were serving in the military.

For one season, a deadly global fight convinced the Vols to stop playing games.