The United States Supreme Court ruled Thursday the police must have a warrant to draw someone's blood if they're suspected of DUI. 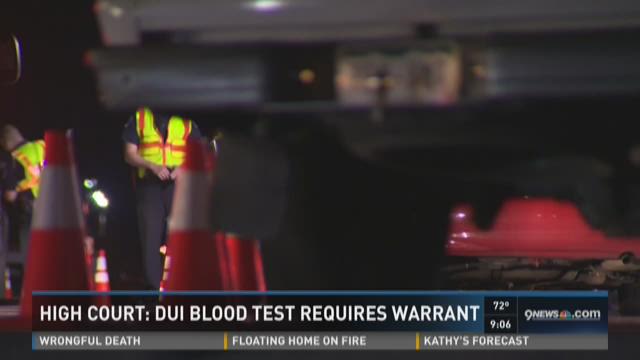 The United States Supreme Court ruled Thursday that police must have a warrant to draw someone's blood if they're suspected of DUI.

"Colorado has an express consent law where the law says here by driving in the state of Colorado you've already expressly consented to giving an officer your blood or your breath if that officer suspects you of driving under the influence, " said Jay Tiftickjian, DUI defense lawyer. "And that certainly will call Colorado law into question."

The ruling likely won't affect cases that have already been resolved but it will impact future cases and those that are still pending in the court system.

Some states have laws that make it a crime to refuse a breath test. Colorado is not one of them, but Tiftickjian says Thursday's ruling creates a gray area.

"It could certainly open the door, for making it a crime to refuse a breath test," he said. "Because the Supreme Court has said police don't need a warrant for a breath test."

The decision by the Supreme Court will also impact cases involving Marijuana, where the only option to test for impairment is a blood test.

"They [police] would have to get a warrant unless there were other circumstances such as serious injuries or something along those lines, that would get around that requirement," said Tiftickjian.

There have been discussions about using saliva tests to determine whether someone is impaired by Marijuana but this ruling does not cover that.

"The Supreme Court's decision today talked about the intrusiveness of a blood test," said Tiftickjian. "There's no other way to do it than to poke a needle into someone and they consider that to be intrusive. Whether or not they will consider a swab placed in someone's mouth to be intrusive would be decided on another day."