LAKELAND, Fla. -- The Florida Department of Law Enforcement has issued an AMBER Alert in Florida, Georgia, and Alabama for a missing 4-year-old Polk County girl. 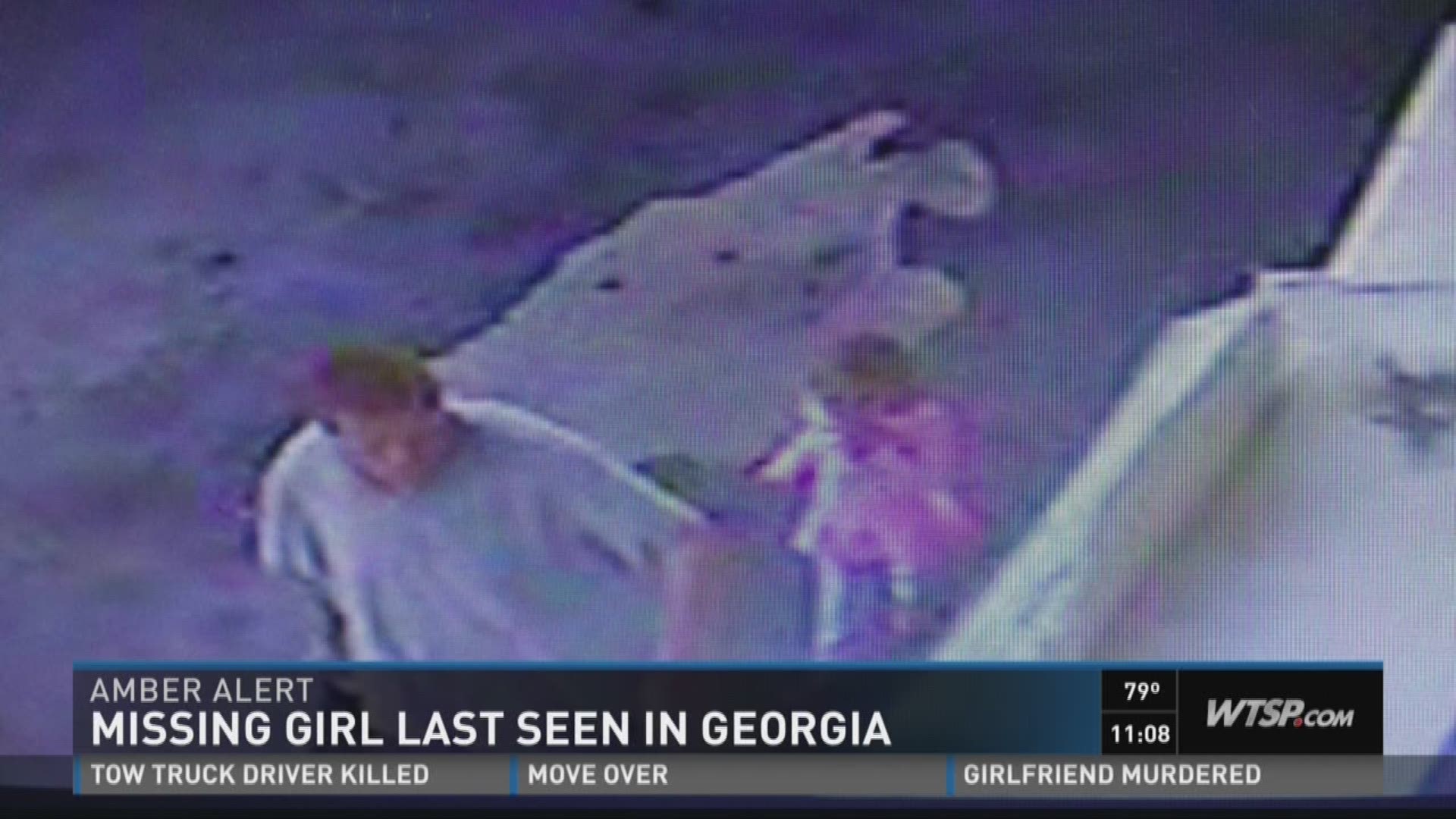 UPDATE: During a press conference regarding the missing child investigation, Sheriff Grady Judd received information that West Hogs was spotted around 2:28 a.m. Monday in Nashville.

Police say Hogs left his home last Monday from Seale, Alabama with his wife. He told her "I have a surprise for you." They drove to Maryland where they rested at a welcome center. The next day he took her back to Georgia when police she said was tired of driving around with him. He dropped her off where she called family to come get her.

He drove to his grandmother's house in Polk City, Fla. His grandmother had not seen him in over a year. Hogs stayed the evening and told his grandma that he had an interview. Later that weekend, the grandmother asked him if he has seen the Lewis family. Sheriff Judd said Hogs lived with the family for two years and was kicked out of the home because he pulled a gun on them.

WATCH THE ENTIRE PRESS CONFERENCE ON THE 10NEWS FACEBOOK PAGE.

The following Saturday morning, around 9:30 a.m., Hogs traveled to the Lewis' family home and took Rebecca and got breakfast at McDonald's. The victim's 16-year-old sister last saw her sleeping at about 9:00 a.m. and about 9:45, the sister woke back up and 4-year-old Rebecca Lewis was not in bed. This was the last time Hogs was spotted until Tennessee.

Judd says around 10-11 p.m. Sunday evening, a park ranger spotted the Nissan in the Cove Lake State Park in Tennessee near the Kentucky border. The park ranger went to check on Hogs and Hogs told him, "I'm here waiting on her mother. She's coming to pick her up." That information was not correct. The park ranger told Hogs he needed to leave because the park was closed and let him go-- not knowing Rebecca was missing. Minutes later, the ranger pulled up to a bulletin board and saw the missing child flier but it was too late-- Hogs was already gone.

Sheriff Judd says the state of Tennessee chose not to do an Amber Alert when Florida law enforcement asked them to because there was no evidence Hogs and Rebecca Lewis were in Tennessee.

Sheriff Judd says all the southeast states need to be aware that he kidnapped Rebecca Lewis.

Hogs is bipolar and suffers from depression. He does not have criminal history. Sheriff Judd says Hogs is familiar with the highways because of his history as a truck driver. It appears Hogs does not have an intention of harming Rebecca Lewis and law enforcement says he hopes it stays that way.

Law enforcement and the FBI are currently helping with the investigation.

Holding each other, they spoke hoping their daughter Rebecca's kidnapper would be listening.

"We just want our baby home safe," Schell said. "If you're watching us, please drop her off somewhere in a safe location so our baby can please come home."

On Saturday morning, police received a call at the 6200th block of Highway 98 North in Lakeland, Florida about a missing girl.

According to Rebecca's parents, they searched the area for over an hour before calling law enforcement. Once deputies arrived they conducted multiple searches of the residence and conducted a house-by-house search of the park. Soon after an Amber Alert was issued.

Sheriff's Office K-9 and bloodhound responded and conducted searches with negative results. The PCSO helicopter also responded to assist deputies with the search.

Just after midnight on Sunday, Polk County Sheriff's Office stated that Rebecca and the man that she is believed to be with -- 31-year-old West Wild Hogs [this is his legal name] -- were spotted in Forsyth, Georgia at a gas station off I-75 at about 6:30 p.m. Saturday evening. According to our TEGNA affiliate 11Alive, officials say the suspect was seen at a BP Station at 1337 Rumble Road in Georgia where his EBT card was traced.

4-year-old Rebecca Lewis and 31-year-old &quot;West Hogs&quot; were spotted in Forsyth, Georgia at a gas station

Early Monday morning just at about 3:00 a.m., an AMBER Alert notification was issued by the Tennessee Bureau Investigation. Officials believe there was a credible sighting of Rebecca Lewis in the area of Cove Lake State Park, in Caryville, Tennessee near I-75 close to the Tennessee-Kentucky border.

Rebecca can be described as a white female, 3'0", weighing 30 pounds, with blonde hair, and blue eyes.

Family members have tears in their eyes when they talk about her. 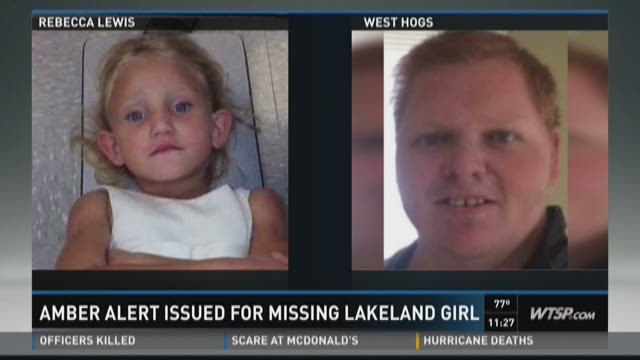 "I just really want her home. Wherever she is. Matt, if you're watching, please just bring her home. We just want her home. She hasn't done anything to you and we've been nothing but kind to you please bring our baby home," said Cheyenne Raney, Lewis' cousin.

Hogs is known to be a long-time family friend who was considered as a cousin. He showed up in Polk County on Friday unannounced and arrived at the family's residence Saturday morning and abducted Rebecca, taking her to a nearby McDonald's restaurant and then driving with her to Georgia. Before the abduction, he mentioned that he might take a couple of the kids to the zoo.

What the family say they just can't understand is why Hogs would take Rebecca. Known and trusted for so many years, Luther says after a brain surgery years ago Hogs wasn't the same.

"He would do crazy things, do obnoxious things and he wasn't himself after the surgery," Luther said.

Still, until this day, both parents say they would have trusted Hogs around any of their children.

"We grew up together. He was my family," Luther said.

Hogs can be described as a white male, 5'8" tall, 220 pounds, with red hair, and blue-green eyes. He is from the Seale, Alabama area. Before his name change, his name was Matthew Clark Pybus. Hogs has a scar on the left side of his head in the shape of the letter "L" and a tattoo of a blue cross and a Chinese symbol.

They may be traveling in a 2012, silver/grey 4-door Nissan Versa, with Alabama handicap tag number 4JL26; which was reported stolen out of Alabama. The vehicle has a magnetic animal rescue paw on the driver side portion of the trunk.

The stolen vehicle that West Hog has been spotted in.

At this point they believe he may be heading toward Alabama or to Russell County. The Seale native has a hunting trailer in Russell County as well.

Rebecca's loved ones have created a Facebook page to help with her search.

Heartland Crime Stoppers is offering a $3,000 reward for information leading to the recovery of Rebecca Lewis. Anyone with information who wants to remain anonymous and be eligible for a cash reward is asked to call 1-800-226-TIPS or CLICK HERE -- anonymity is guaranteed.