The wildfire that started Saturday in Boulder County has burned 9,978 acres and is 21% contained. 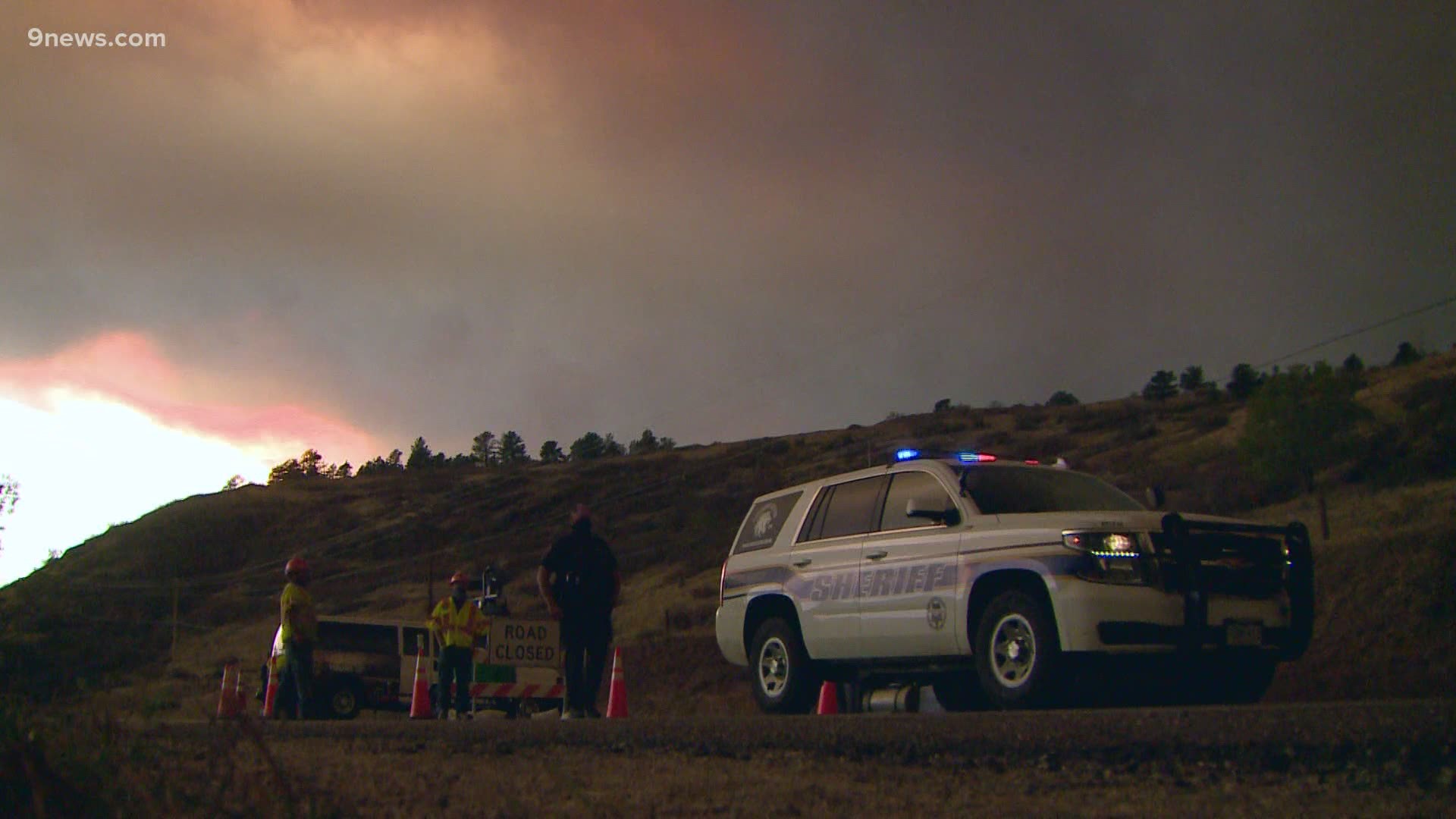 BOULDER COUNTY, Colo. — New evacuations were ordered Wednesday for some residents living near the CalWood Fire burning in Boulder County.

Due to current fire behavior and gusty winds in the forecast, the Boulder Office of Emergency Management (BOEM) announced that an evacuation order has been issued for Lyons Park Estates to allow residents time to evacuate and prevent issuing an order in the middle of the night.

"All residents being evacuated should think about any winterization that needs to be completed to their property due to the possible incoming winter weather," BOEM said in a tweet.

Fire officials said the mandatory evacuations, which went into effect at 2 p.m., were enacted out of an abundance of caution as windy conditions are expected to pick up throughout the day. Deputies are currently going door-to-door to notify Lyons Park Estates residents of the evacuation.

The number of housing units in this evacuation order is 104. The estimated population 234. pic.twitter.com/w4nnAmScWS

Fire officials said they've tracked the fire's origin down to half of an acre, according to a Tuesday live community Facebook update by BOEM. Officials are looking for witnesses as to how the fire started.

The wildfire that started Saturday is the largest recorded in Boulder County. It is 21% contained and has burned  9,978 acres. BOEM said on Sunday that the fire had damaged at least 26 houses and released a list of the structures.

Teams have accessed about two-thirds of the burn area. The assessment has focused on homes, and officials said Tuesday that some non-permitted structures, like RVs or outbuildings, may have fallen to the fire, but they will have to wait until the heat lets up to check.

On Wednesday, dozers, engines and hand crews are working on the southeastern side of the fire to build a line as the fire backs down the hill towards Spruce Gulch, fire officials said.

On the northeast side of the fire, crews continue work on the canyon's edge and in the Highway 7 corridor with the goal of keeping the fire south of Highway 7, according to fire officials. A Red Flag Warning is in effect for the area from 12 p.m. Wednesday until 8 a.m. Thursday.

Todd and Courtney Walsh had just 20 minutes to gather what they could and leave their home in the foothills on Saturday,

Courtney Walsh recalled telling her two kids the evacuation was a "fire drill." It wasn't until she saw images of a burning home online that reality sunk in.

“I knew that it was lost," she said. "I thought potentially that’s not our house, but it’s pretty obvious it was.”

The Walsh family lost their home of nearly four years, but they hold onto gratitude.

“Our kids are safe," Courtney Walsh said. "Our dogs are safe. Our loved ones are all safe. My parents are safe.”

Courtney and Todd Walsh said they are thankful for the fire crews who worked to save their neighbors' homes.

“It’s a humbling experience to run away from something and to think there’s nothing I can do, and to see men and women that are going right into that," Todd Walsh said.

The family said three homes in their neighborhood were destroyed, but firefighters managed to save four others.

“These people are volunteering to go into flames and smokes and truly risking their lives for people like us and I’m just so – I’m just so thankful," Courtney Walsh said.

Close to 3,000 people in about 1,600 homes were affected by evacuation orders, BCSO said. Mandatory evacuations included the entire town of Jamestown.

See a map of evacuations for this and the Lefthand Canyon Fire below; to search for a specific address, visit this map.

Several roads remain closed due to the fire. A list of road closures is here. U.S. 36 reopened Monday afternoon between North Broadway and Neva Road.

The causes of the CalWood Fire and the Lefthand Canyon Fire, which started Sunday just to the south, were under investigation.

Cool and humid weather on Sunday helped with knocking down the CalWood Fire, but dry weather and wind were a concern in the coming days, according to BCSO.

The Rocky Mountain Black Type 2 Incident Management Team took over command of both the CalWood Fire and the Lefthand Canyon Fire on Monday morning.

>> Watch below: How big of a threat are wildland fires to major cities? 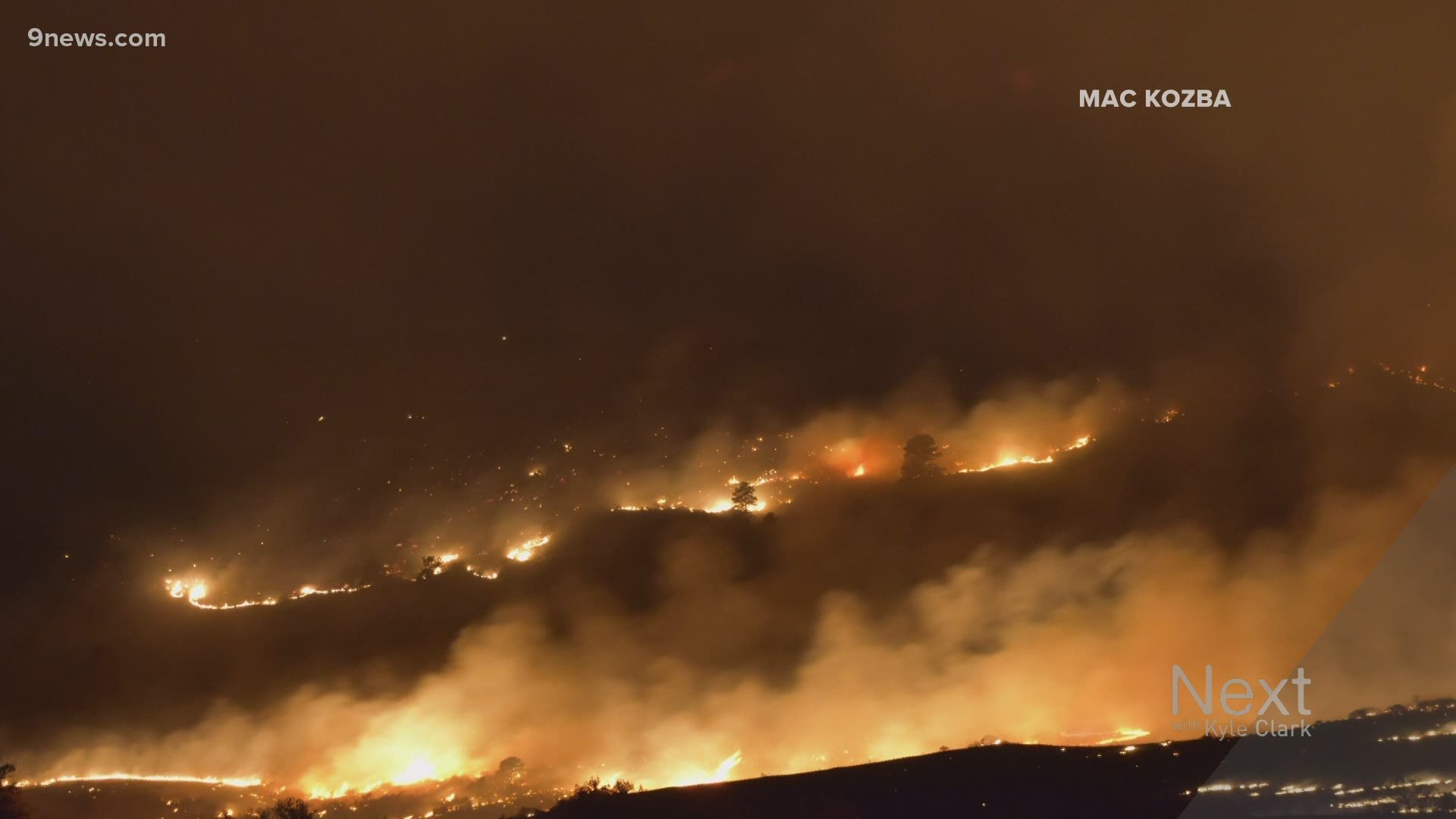 An evacuation point to assist evacuees will be open from 9 a.m. to 10 p.m. at North Broadway and Iris Avenue in Boulder.

Many residents checked in Saturday at the evacuation point but only four residents needed to be set up with shelter that night, Boulder OEM said.

Boulder OEM asked that no one show up to spontaneously volunteer or donate supplies in any area, particularly at the evacuation point, saying they need to maintain space and order at the location for those who have evacuated.

Anyone who wants to make a donation or volunteer can do so at this link.