In spite of wildfire risk, there's no statewide guide book for building property in Colorado

Homeowners are looking to rebuild after 2020's destructive fires, but there is no statewide set of regulations explaining how to build in wildfire-prone areas. 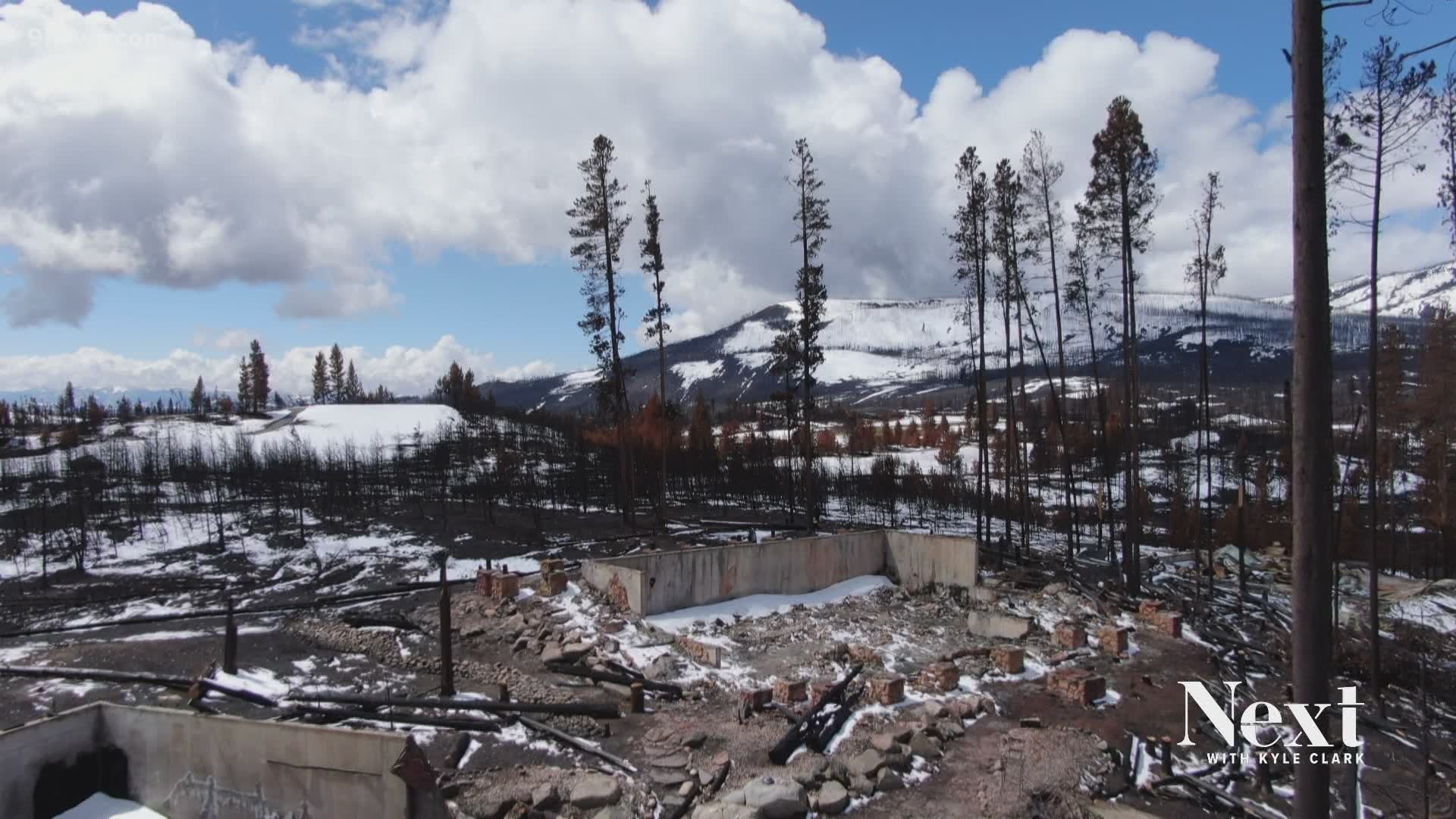 The clay bowls were some of her only belongings that survived the East Troublesome Fire of October 2020. But Olson remembers visiting the shell of what once was her beautiful home one day this past winter, picking up the pottery and smashing it.

She can’t quite explain why.

“It’s the most traumatizing and devastating thing I’ve ever been through,” Olson said as she stood near the area where her kitchen used to be.

Olson, an assistant fire chief for the Grand Fire Protection District No. 1, always knew this was a possibility.

“Being in the fire service you shouldn’t think that it’s not going to happen to you, but I guess I kind of had that feeling that it wouldn’t happen to me,” she said.

Olson and her husband finished construction on their dream home in 2004, long before she joined the fire service. They decided to build in Grand County, which has no rules or regulations for how homes should be built in the Wildland Urban Interface (WUI), the area where the forest meets neighborhoods.

“The type of material the heavy timber we used, it’s very difficult to get that to ignite,” Olson said.

Now, six months after the most devastating fire in Grand County’s history, some of the homeowners who lost everything are beginning to rebuild in a county that still has no WUI-specific building codes.

“Grand County is one of those counties where people come here to do what they want on their properties and a lot of regulation isn’t their cup of tea,” Olson said. “However after something as devastating as this -- I would hope that would be the next step.”

In Colorado, these types of regulations are controlled at the county level. Other states, like California, have implemented statewide building codes requiring certain precautions and building materials for homes in wildfire-prone areas.

“Colorado is expected to increase its population by 40 percent by 2050 and that means people are going to move somewhere and some of those places are wildfire-prone areas,” said Molly Mowery, executive director of the Community Wildfire Planning Center.

After devastating wildfires in 2012, the state of Colorado convened a task force looking at potential measures to reduce wildfire risk. The group suggested the state legislature consider adopting a wildfire building code.

Neither the model nor the mandate moved forward in the state legislature.

“I believe there was a lot of resistance to fears about the costs, fears about local control, home rule, taking away that ability for local communities to make their own decisions and of course private property rights,” Mowery said.

Mowery is advocating that the state create a model building code that counties in dangerous areas could choose to adopt.

“As a minimum, we don’t even have resources at the state level that would say if you are a community interested in adopting a building code, this is how you could do it,” she said.

“We know we’re going to see growth, why don’t we equip these communities to do it in a way that isn’t setting themselves up for failure in the future.”

While Grand County doesn’t have any specific wildland building codes, Boulder County had some of the strictest WUI regulations in the state.

“We had the first big fire in 1989, the Black Tiger fire,” said Kyle McCatty with Wildfire Partners, a Boulder County program that helps homeowners understand the building codes. “It burned 40 or so houses.”

In 1993, McCatty says, the county implemented its first building codes for the WUI. The rules have evolved every few years since.

“I think we’ve only had one or two houses that have gone through the new building code process that had those wildfire mitigation codes that were actually destroyed in a wildfire.”

Dave Kielsmeier bought 35 acres of property south of Nederland in 2016 with plans to build.

“The day after we closed on the property in 2016, the Cold Springs Fire broke out just north of Nederland. That’s only about 5 miles here where it was burning and going east,” Kielsmeier recalls.

He put the finishing touches on his new home this year, built with more regulations than he was expecting.

He was expecting requirements for fire-safe material and some mitigation work to the trees around the property.

But the building codes actually begin on the highway, with signage required to let firefighters know more information about the property. The driveway must be a certain width. There must be an underground cistern with water for firefighters to use. The propane tank must be buried. And the home itself must be equipped with an internal sprinkler to damp down a fire before it reaches outside.

“In understanding it all now and putting the pieces together it all makes sense to me,” he said.

RELATED: These are the 9 biggest wildfires in Colorado history

In total Kielsmeier estimates the extra restrictions added about 15 to 20% to the cost of the project.

“It’s worth it for the privilege to be up here and the peace of mind that at least you’ve done all that you can do,” he said.

McCatty has worked with Kielsmeier on the property design.

“We just kind of talk to folks and help folks understand what the requirements are and what the reasoning is and that goes a long way,” McCatty said.

“We live in the forests and there’s going to be even more houses built in the forests and so we have to put out every fire that pops up. But what that creates is a situation the fires that we can control occur under more extreme conditions.”

Even the most restrictive codes may not have saved homes in Grand County from the powerful East Troublesome Fire.

Regulations aren’t a guarantee, according to Mowery, the land use planner.

“We can’t guarantee that they would survive but science tells us the survivability increases,” she said.

Olson did a lot of work to make her home safer, like clearing out trees on the property and creating a buffer zone between her home and nearby fuels.

“Because of the way this fire was and the behavior and the weather… I don’t think it would change the outcome,” Olson said.

She said her personal loss has motivated her as a firefighter. One of her focuses with the fire department is community engagement.

“My goal is to not lose another home here… or another life,” she said.

Olson is now leading a team looking at potential changes that can be made to regulations in the county to make the community a little safer.

“We haven’t had this kind of devastation in this county. It’s almost… it’s unfortunate that it takes such a devastating event to have people kind of wake up and do more,” she said.

Though she knows it will be a tough sell. Many people move to Grand County for the privacy and the ability to do as they wish with their property.

“Blanket codes and blanket regulations maybe not,” she said. “One size doesn’t fit all, so I think that’s what I’m really stressing.”

The chair of the Grand County board of commissioners, Merrit Linke, told 9NEWS commissioners will listen to any suggestions Olson’s group offers while still working to protect the private property rights and concerns of homeowners in the county. He said he welcomes the discussion as long as restrictions are considered alongside other precautions like forest management.

They may be more likely to consider regulations about mitigation. Olson said when people do the work they need to do on their property and their neighbors don’t, it can create an awkward situation. If the county had the power to tell that homeowner to do the work, she argues it would help.

“If you had some sort of code or regulation that says you need to remove dead trees or you need to have your logs at least 30 feet away from structures during the summertime, I think those things are good safety best practices that we could embrace,” Olson said.

In the shell of her garage sits a piece of metal that could be mistaken for artwork. It’s all that is left of the engine block of a Toyota truck parked in the garage during the fire.

She used it to demonstrate the strength of the fire.

“Not every fire is going to be an East Troublesome,” she said “So we need to plan for the 90 percents, the 99 percents. The fire that we can protect our homes against…protect against embers.”

“I think, now that I’ve gone through this and I work on fires on incident management teams that I will never do my job the same again dealing with folks who have been evacuated or lose their homes.”

Contact 9News Reporter Steve Staeger with tips about this or any other story by e-mailing steve@9news.com.