The Plumas County Sheriff's Office said four people from Greenville remain missing at this time. The fire's smoke plume has settled over Colorado and Utah. 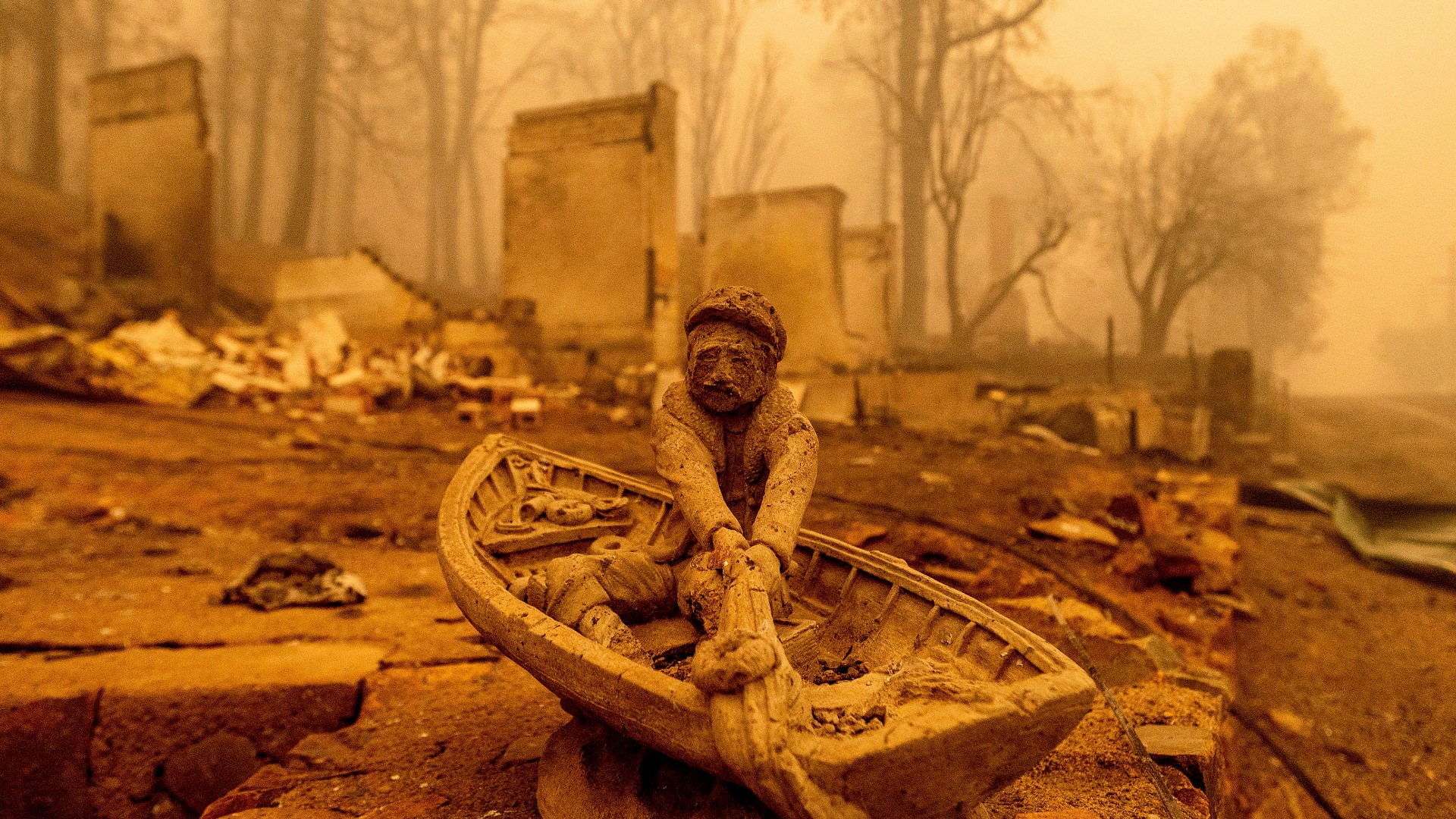 PLUMAS COUNTY, Calif. — Thick smoke that held down winds and temperatures began to clear Sunday from the scenic forestlands of Northern California as firefighters battling the largest single wildfire in state history braced for a return of fire-friendly weather.

Fueled by strong winds and bone-dry vegetation, the Dixie Fire has grown to become the largest single wildfire in state history. Destroying homes and businesses, the fire, burning in Butte, Plumas, Lassen, and Tehama counties has burned a total of 489,287 acres and is 21% contained.

The Dixie Fire surpassed the Mendocino Complex, which burned 446,723 acres in 2018. The August Complex remains the largest wildfire in California history, which burned 1,032,648 acres.

The winds weren't expected to reach the ferocious speeds that helped the Dixie Fire explode in size last week. But they were nonetheless concerning for firefighters working in unprecedented conditions to protect thousands of threatened homes and buildings.

“As folks are familiar with the past four weeks, we’ve seen some tremendous growth of fire in one day- ran almost a hundred thousand acres - unprecedented fire behavior. But this is all due to unprecedented conditions that we see with the fuels that are out there,” said Operations Section Chief Mark Burnton with Cal Fire.

Residents of scenic forestlands in Northern California faced a weekend of fear with the blaze threatening to reduce thousands of homes to ashes.

"It’s scary when you sit there and see all the smoke over the mountain and wonder where’s it at because you can’t see it. But you can see the smoke," said Ann O'Malley, who with her husband Kevin, evacuated Westwood and is staying at an evacuation shelter in Susanville.

Cooler overnight temperatures and higher humidity on Saturday slowed the spread of the fire. Temperatures topped 90 degrees Fahrenheit instead of the triple-digit highs recorded earlier in the week. Smoke blanketed Northern California and western Nevada, which caused air quality to deteriorate to very unhealthy and at times hazardous levels.

In a Sunday update, Burnton said crews had a great movement of fire around Highway 36, outside the boundaries of Lassen National Park. He said they're expecting the weather to push the fire in that direction as they try to keep the fire in check.

Burnton said there was a possibility that the potential push from the fire could impact areas down into the peninsula back into Westwood and the east part of the lake as crews try to protect communities in the area.

The smoke over the east zone of the Dixie Fire was a boon for firefighters, but according to Operations Section Chief Jake Cagle, that inversion lifted around 1 p.m. More aggressive fire behavior and movement happened in the area between the Walker and Sheep fire scars on Sunday. Cagle said China Gulch also saw extreme fire activity on Sunday.

On Monday, crews are expected to put in about 8 miles of contingency line from the Walker Fire to the Sheep Fire scars to help keep the fire away from Janesville.

“As you guys have seen, this extreme fire behavior, all we can do is get out in front of this thing and see where we can connect the dots,” Cagle said.

The Plumas County Sheriff's Office updated its list of people who are still unaccounted for in the Dixie Fire. The sheriff's office said 27 people have been safely recovered, however, four people remain unaccounted for.

Those individuals are identified as the following:

The sheriff’s office said they are asking for the public and the media’s help in locating these individuals. Photos of the missing people have not yet been released. If you know where any of these people are, you are asked to call the Plumas County Sheriff’s Office at 530-283-6300.

Plumas County Sheriff Todd Johns said multiple people have been arrested for being in mandatory evacuation zones. Those people were not residents of the area they were arrested in. Johns reported in a press conference Saturday that rumors of looting happening in the Greenville area are false. Lassen County Sheriff Dean Growdon said four people were arrested for violating mandatory evacuation orders.

However, Lassen Volcanic National Park confirmed that the Mt. Harkness Fire lookout was also destroyed in the fire.

About 5,137 personnel are working the fire, Cal Fire announced in its latest report. More than 13,871 structures are threatened by the fire, and so far 404 have been destroyed along with 185 minor structures.

A live map showing which structures have been destroyed or at risk is available below.

A live evacuation map from Butte County is available below.

An updated map of the acreage of the Dixie Fire

According to Cal Fire, 2020 was one of the most severe fire seasons on record as 9,917 wildfires burned 4.2 million acres. Over 9,000 structures were destroyed, and 31 people (civilians and firefighters) were killed.

California also experienced its first "Gigafire" because of the August Complex Fire, burning over 1 million acres by itself. Four of California's top five largest wildfires in state history happened in 2020.

If you live in a wildfire-prone zone, Cal Fire suggests creating a defensible space around your home. Defensible space is an area around a building in which vegetation and other debris are completely cleared. At least 100 feet is recommended.

RELATED: Where are wildfires burning in the Golden State?

The Department of Homeland Security suggests assembling an emergency kit that has important documents, N95 respirator masks, supplies to grab with you if you’re forced to leave at a moment’s notice. The agency also suggests signing up for local warning system notifications and know your community’s evacuation plans best to prepare yourself and your family in cases of wildfires.

Some counties use Nixle alerts to update residents on severe weather, wildfires, and other news. To sign up, www.nixle.com or text your zip code to 888777 to start receiving alerts.

RELATED: Are you wildfire ready? Here's what to do to prepare for fire season.

PG&E customers can also subscribe to alerts via text, email, or phone call. If you're a PG&E customer, visit the Profile & Alerts section of your account to register.