Proposed legislation would deploy tens of thousands of workers to thin western forests before fires break out - a technique familiar to Boulder County land managers. 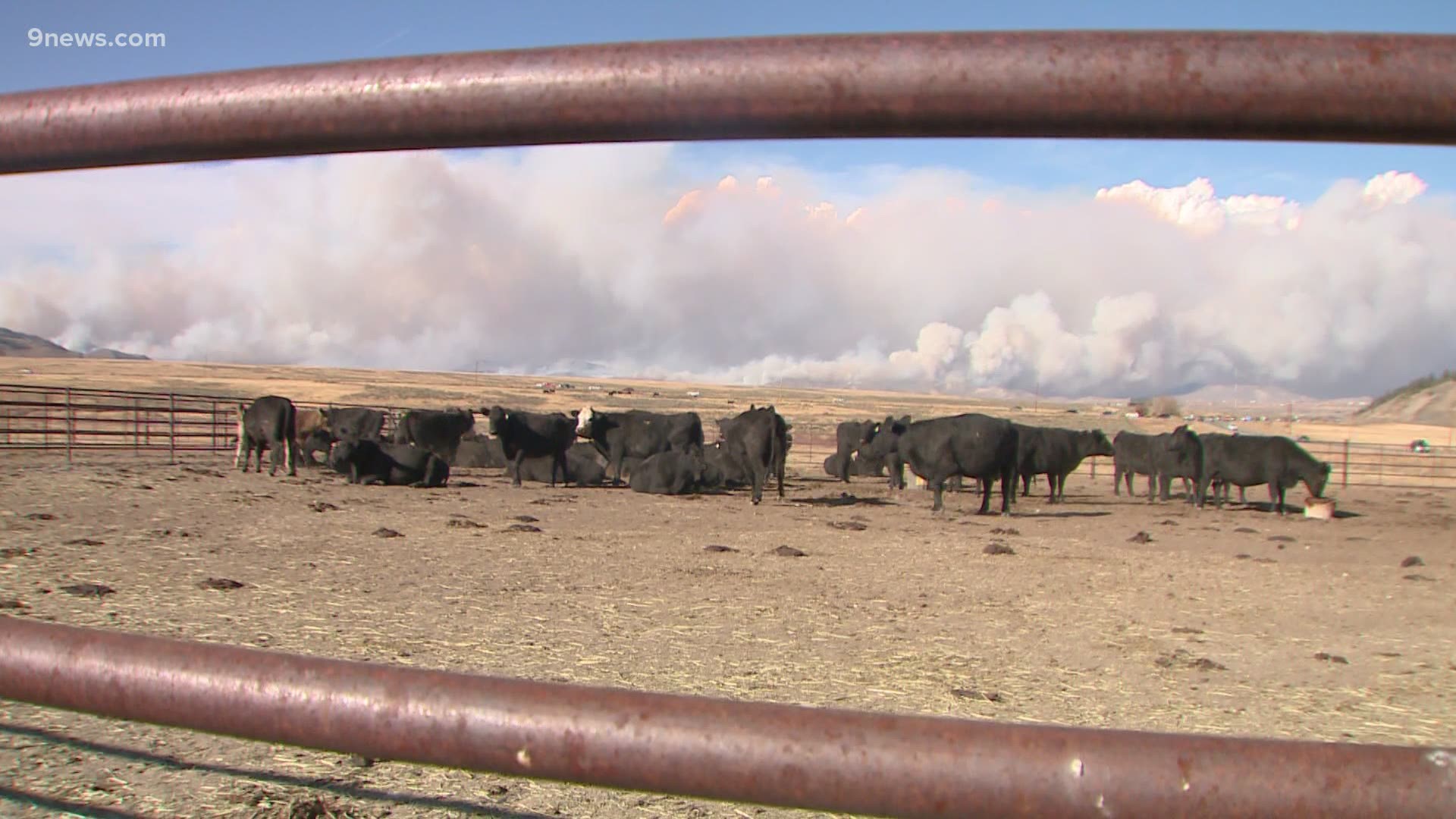 BOULDER, Colo — Green shoots of grass sprout from blackened mountainsides northwest of Boulder where, six months ago, the most intense wildfire in local history ravaged a carefully thinned forest.

> Video above: Drought conditions continue to improve, but firefighters still urge caution in the mountains.

Deer and golden eagles are back. But there’s no guarantee that the million or so Ponderosa pines destroyed by the 15.7 square-mile Calwood fire will regenerate, or even that the soil will stay in place. Before flames hit, this centuries-old forest ensured clean water for 20,000 homes, serenity for 110,000 hikers and bikers each year and, perhaps most importantly, absorption of heat-trapping carbon dioxide.

The fire has accelerated a transformation here that also is reshaping once-lush forests around the West. A combination of larger, more severe wildfires, hot, dry conditions and insect infestations keeps forests from bouncing back, new research shows. Without trees, flood and mudslide risks rise and erosion speeds up, threatening to clog streams that flow into drinking water intake pipes.

The U.S. Forest Service and Boulder County have begun a $6.5 million emergency push to try to stabilize slopes here before hard summer rain. It's an immediate fix for what research indicates  could be a long-term problem.

"We are definitely more vulnerable because of this fire," said Therese Glowacki, natural resources manager for Boulder County Parks and Open Space. "Will it be too hot and dry now to have Ponderosa pines?"

In Washington, D.C., Democratic Sen. Michael Bennet and Rep. Joe Neguse are pushing legislation to deploy tens of thousands of workers to thin western forests before fires break out -- a technique Boulder County land managers have used repeatedly over the last decade. Federal land managers, meanwhile, said they're evaluating whether to replant and how much in an effort to promote at least partial recovery from a wildfire.

“You are going to see a changed landscape” and some species “might not come back,” said Jacqueline Buchanan, the Denver-based deputy regional director of the Forest Service.

“It feels like there’s an acceleration happening. ... We’re struggling to be able to look ahead and know what to anticipate,” said Buchanan, who also represents the West on a new Federal Emergency Management Agency team tasked with guiding recovery from fires and other climate-driven disasters.

“We try to follow nature,” she said. “In an ideal world, we would get ahead of wildfires.”

Wildfires played key roles in forming forests over thousands of years, bringing balance and diversity. But natural cycles were distorted by decades of humans aggressively suppressing fire, which is still a priority in Colorado and other western states. The resulting tree density, along with high temperatures and aridity, led to last year’s record-breaking megafires in California and Colorado.

Cheng recently testified in Congress, warning that forest fires are releasing more carbon into the atmosphere, that forest recovery may take centuries -- if it happens at all -- and that the United States’ capacity to sequester carbon is diminishing.

“If recent research is providing insight into the future, the prospects are low for forests to return to what people were used to seeing,” Cheng told The Denver Post. “Forest cover could be sparser, trees would be replaced with shrubs and other plants, the wildlife might be different, and the water-holding and filtering capacity of forests would be altered for a long time.”

A University of Colorado study published in February tracks with his assessment and blames climate warming.  A 2017 study using data from 1,485 burn sites found increasingly unfavorable conditions for forests to regenerate throughout the Rocky Mountain West.

And northwest of Colorado Springs, the 70-square-mile core of the 214-square-mile scar from the 2002 Hayman fire shows how severe burning can reduce a towering 200-year-old Ponderosa and Douglas fir forest to grasses and shrubs two decades later.

"The problem is the intensity of the fires,” Wilderness Society senior scientist Greg Aplet said. “We’re blowing out these great holes in forests, and the holes are too far from the edges of the forests to get seeds in.”

Major disturbances are part of nature and “we need disturbances,” Aplet said, pointing to gravel slumping into streams after fires that creates spawning habitat for fish. But severe burns can trigger “a conversion from forest to something else – and a loss of habitat for the species that used to live there,” he said. “It could be you end up with a grassland.”

People moving into forests complicates what can be done, forcing fire suppression that sets up more ecologically destructive fires in the future.

A recent state study estimated 2.9 million Coloradans live in burn zones. The Calwood fire destroyed 22 homes north of Boulder, near where 31-year-old Kelcie Mitchell, whose house escaped damage, recently was walking her dog near the Lake of the Pines.

“There’s always a possibility of life or death, wherever you’re at,” Mitchell said. “I prefer being next to a forest. Wildlife. More peace. You’re more connected to what we are. You’re not separated from the nature of the world.”

Most owners of the destroyed homes are expected to rebuild, officials said, because Boulder County's program that bought out residents of flood zones after the 2013 floods hasn’t been expanded for wildfire burn zones.

Fighting to 'keep the soil on the slopes'

Up on the blackened mountainsides between standing dead pines, orange-vested contractors recently were scoping sites to install 30 small dams and a pond to try to keep soil, crucial for new growth, from eroding.

This emergency effort must stabilize the burned terrain as quickly as possible, Glowacki said, adding, "Our role in this is to keep the soil on the slopes."

But by May 21, only 200 acres out of 1,800 acres prioritized in the project had been covered. The grinder had broken.

If scorched slopes remain barren, hard rain likely will  cause flooding, possible slides and wash sediment into Geer and Plumley creeks, which flow into Lefthand Creek, the drinking water source for communities north of Boulder.

“We’ve dodged a bullet because this has been one of the wetter springs but here it's been low-intensity rain,” said David Hirt, senior plant ecologist for Boulder County, where residents have been advised to heed flood alerts.

"My biggest worry now," Hirt said, anticipating summer monsoons that typically start in mid-June, "is losing soil off these slopes.”

The former Ponderosa forest was revered as a recreational space, drawing hikers, wildlife watchers and mountain bikers. And popular Heil Valley trails have been closed until Sept. 30 with officials citing risks of flooding and people obstructing helicopter operations.

Down below in Lyons, Lefthand Watershed Center director Jessie Olson, who helped plan the stabilization project, is counting on the success of this effort.

“What's at stake is being able to have clean water flow out your faucet. If we're not working actively now to restore our forest, we will be compromising Colorado and our communities. These catastrophic high-intensity burns can have devastating impacts later on our water," Olson said.

"And people want to be able to use forest trails," she said. "If we are not proactive, we're also going to be facing more closures."

RELATED: Insurance-based firefighting: These crews don't go out to save every house