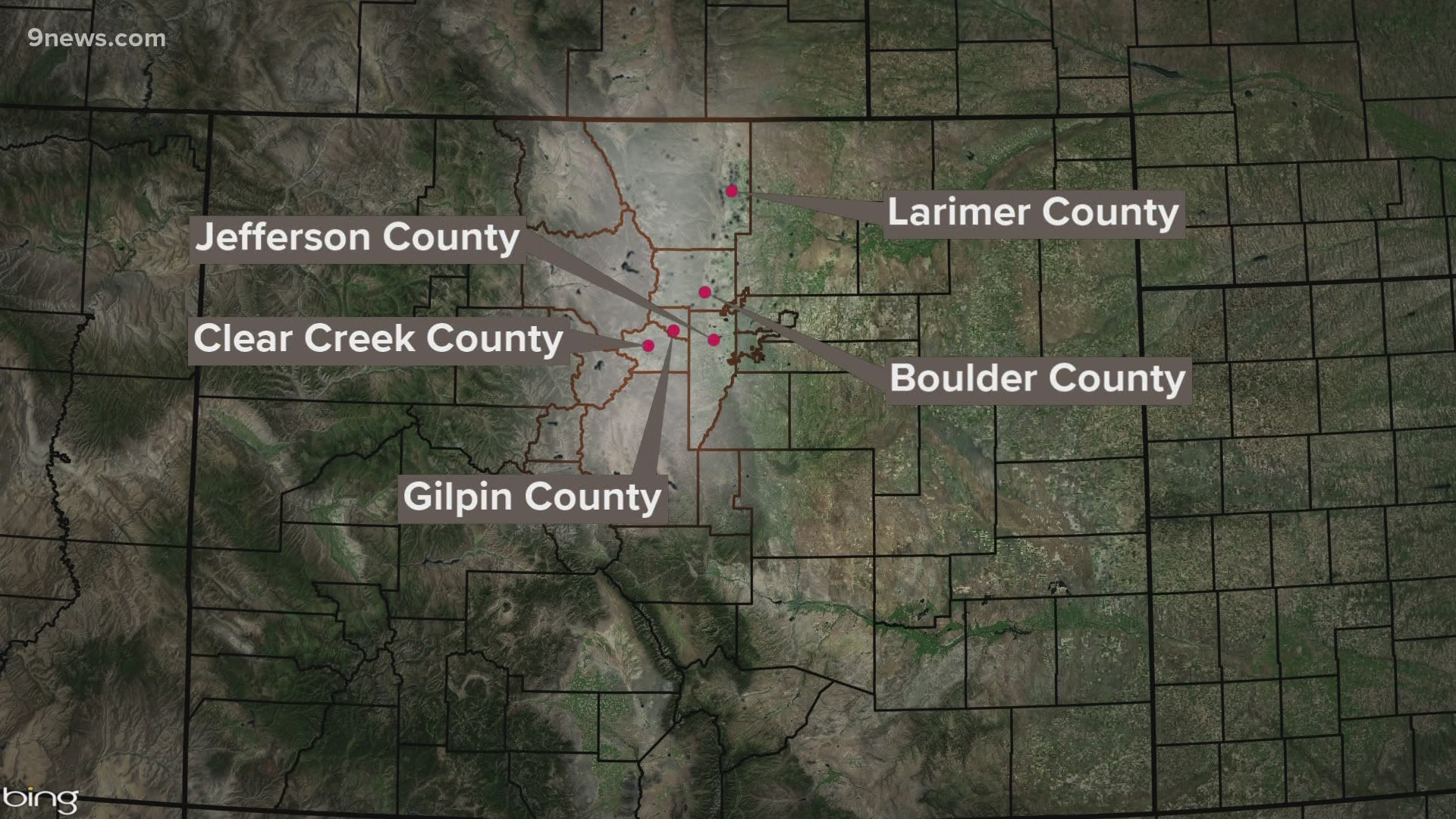 This comes after Colorado Parks and Wildlife said in a news release Thursday night that they were closing the Bergen Peak, Georgetown and Mount Evans State Wildlife Areas indefinitely due to the extremity of expanding fire conditions.

Most National Forest land in five Colorado counties was closed effective at midnight on Wednesday due to "unprecedented and historic" fire conditions, the Forest Service announced.

Arapaho and Roosevelt National Forest land in Clear Creek, Jefferson, Gilpin, Boulder and Larimer counties will be closed temporarily, according to the announcement. The closures will be re-evaluated daily as conditions change.

> Read the order for the temporary closure.

On Friday, the Sulphur Ranger District was added to the Arapaho and Roosevelt National Forest’s temporary closure. The Routt National Forest is adjusting its area closure into Jackson county as well.

Credit: US Forest Service
The areas in purple are currently closed.

You can view a larger map of the closure area here.

New fire starts and the explosive growth of fires throughout the northern Colorado Front Range over the past week, including the Cameron Peak, CalWood and Lefthand Canyon Fires, prompted the decision.

There's also now a limited capacity for response due to multiple wildfires in our state and other states. Persistent fire-danger weather conditions are also expected with no immediate relief in the forecast.

“The number of large fires and extreme fire behavior we are seeing on our Forests this year is historic," Forest Supervisor Monte Williams said.

"These temporary closures are necessary to protect the public and our firefighters, and we will keep them in place until conditions improve and we are confident that the risk of new fire starts has decreased. I ask all of our local residents and visitors to take these closures and evacuations seriously to allow our firefighters to focus on the mission of safely suppressing the existing fires."

As of Tuesday morning, nearly 442,000 acres of land were affected by wildfire across north-central Colorado and southern Wyoming, according to the Rocky Mountain Area Coordination Center. About 3,000 firefighters and fire support personnel are assigned to wildfire operations in the region.

Hunters with second season rifle licenses affected by the closures are to wait for an email from Colorado Parks and Wildlife (CPW) or click here for full details on all of their refund options.  CPW asks that all hunters do their part to observe the emergency closure and all other restrictions.

The temporary closures are in place to support the suppression of the three fires currently burning in these counties and to prevent the potential for new fire starts, which impacts the resources available for existing fires.

The orders restrict access to all but emergency personnel and persons with a permit authorizing their presence in the closure areas. Drivers authorized to be in the forest are urged to use caution, as many forest roads may be busy with firefighters, fire vehicles and heavy equipment engaged in suppression and containment efforts.

Areas not included in this closure order have existing fire restrictions in place, including campfire bans, due to high and extreme fire danger levels.

Pike National Forest lands, which partially sit in Jefferson County, are not affected at this time.