Disaster declaration made as Cameron Peak Fire continues to grow

The fire is burning near Chambers Lake in national forest land. A large portion of forest land has been closed, meaning there be will no access to trails. 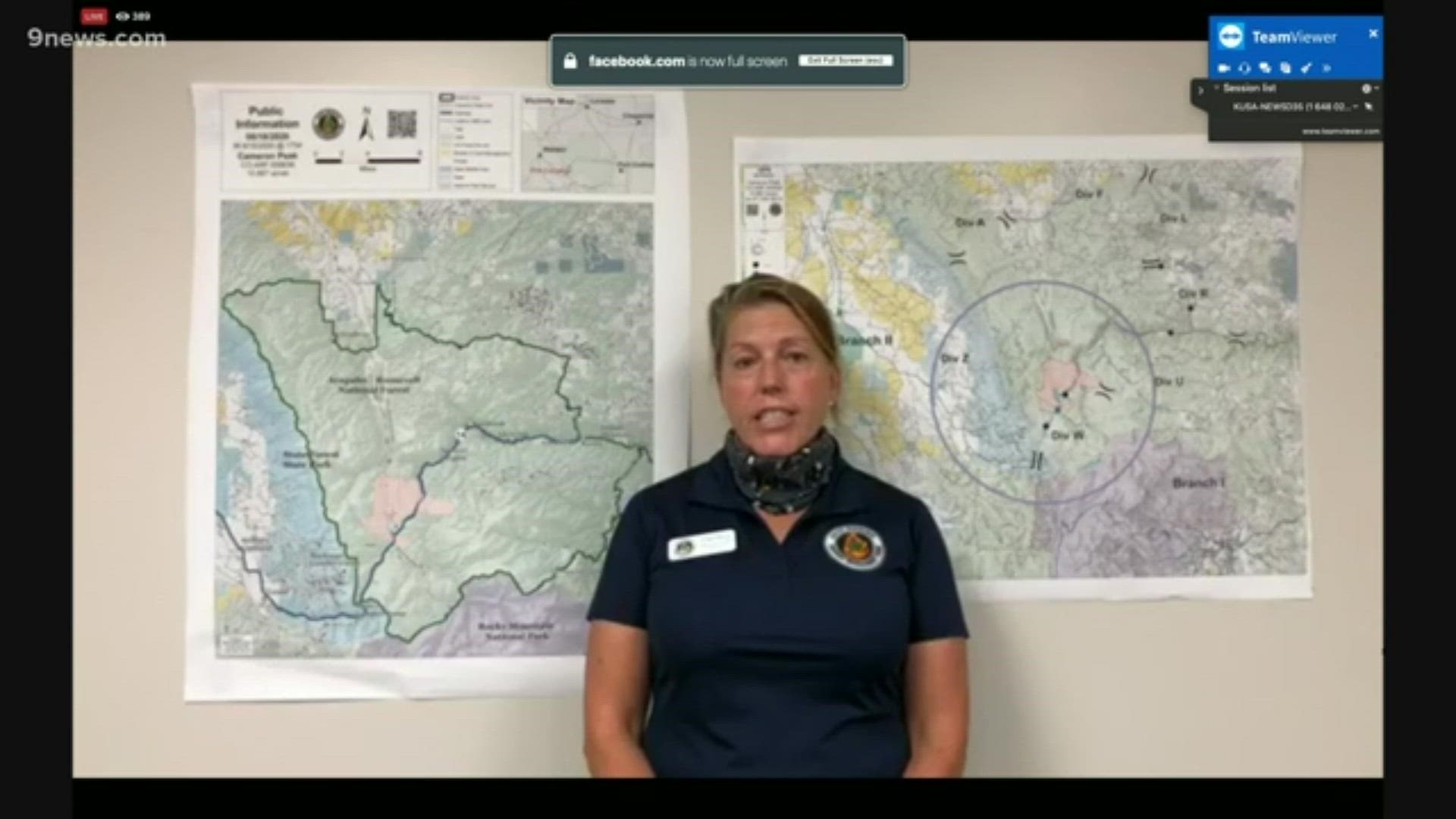 LARIMER COUNTY, Colo. — The chairman of the Larimer County Board of Commissioners has made a formal disaster declaration in response to the Cameron Peak Fire, which had grown to 13,305 acres as of Monday morning.

>Video above: Officials provide an update on Sunday evening.

Fire officials on Friday evening ordered the area of Long Draw Reservoir, which was previously under voluntary evacuations, to move to mandatory evacuations due to fire activity.

Two big factors in the fire's growth area are beetle kill and very dry conditions. The incident commander estimated that about 80% of the forest has been impacted by beetle kill but also noted that it was drier there than he had seen in years.

Firefighters were assisted by several helicopters that made strategic water drops on the fire on Friday. A Type 2 Incident Management Team (IMT) took over management of the fire Saturday morning in close coordination with local resources.

The Cameron Peak Fire is burning in an area about 60 miles west of Fort Collins.

An emergency alert sent Thursday from LCSO said there is "immediate and imminent danger" from the fire. Notifications for mandatory evacuations went out to more than 700 contacts, but those aren't individuals, according to the LCSO.

There are "very few" houses in that area, according to David Moore, a spokesperson for the sheriff's office. He said the large number of contacts was likely because people who camp there had signed up for alerts. A total of 14 campgrounds were closed.

Joseph Vonida with the Colorado National Guard said they were responding to a request from LCSO to assist with a search and rescue operation to locate a family of four, including two children in the area.

Sharing photos from one of our firefighters yesterday. Still waiting on updated acreage this morning. Area closure information will be posted soon. https://t.co/wPmStkHX2r pic.twitter.com/Zn9WEpyqYu

Anyone in the are area from the intersection of Highway 14 and County Road 103 north to Four Corners, as well as the areas around Chambers Lake should evacuate the area as quickly as possible, the message said.

Due to fire activity and the potential for growth, LCSO was asking people to avoid the Crown Point area, Long Draw area, areas west of Red Feather and south of Deadman, and the southern end of the Laramie River Valley.

The map below shows the areas included in the order. It can also be found here.

Those leaving the area should travel north into Wyoming for safety reasons, according to the message.

Firefighting efforts have closed Colorado Highway 14, according to the Colorado Department of Transportation (CDOT).

Hwy 14 west was closed in the area and traffic was being allowed to Lake Agnes, American Lakes or Michigan Ditch.

The closure had impacts on numerous recreation sites, including many trails and trailheads. A number of boating and fishing sites were closed, including Chambers Lake. Picnic Sites closed include Bellaire Lake, Bennett Creek, Cameron Pass, Chambers Lake, Fish Creek and Tunnel.

Hot dry weather conditions along with gusty winds in the afternoon were expected to be a factor in the afternoon. Wind gusts will be between 15 and 25 mph, according to the National Weather Service.

Numerous aircraft were ordered to assist crews on the ground, but were called back due to high winds Thursday.

Nearly 300 firefighters were working the blaze.

The strong winds and heat pushed the growth of two of the state's larger fires which include the Pine Gulch Fire near Grand Junction and the Grizzly Creek Fire just east of Glenwood Springs.