University of Wisconsin-Madison researchers published a new paper on Monday tracking the impacts of the hunt as well as federal delisting. 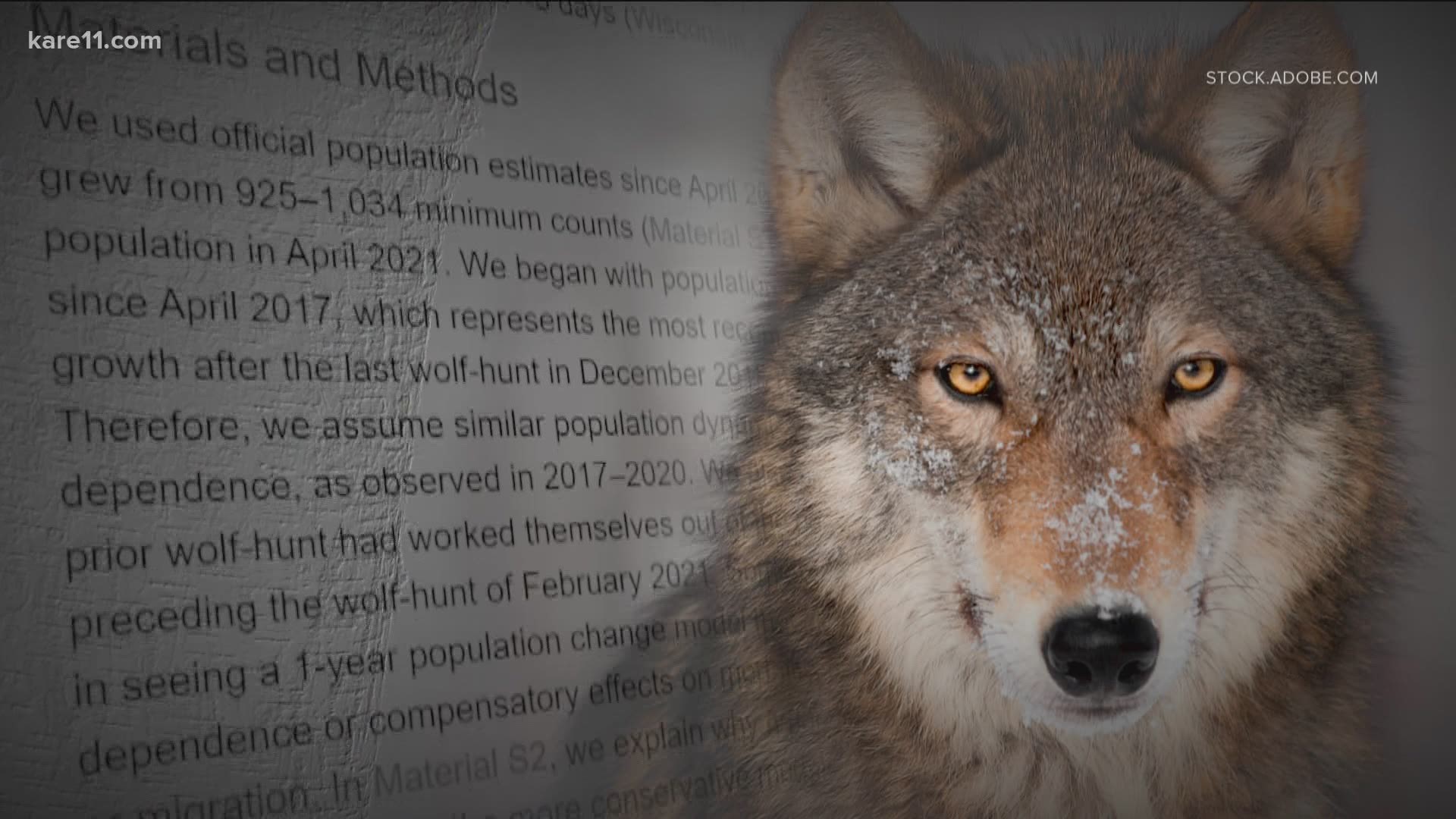 MINNEAPOLIS — Wisconsin DNR officials admitted back in February that their wolf hunt went a little further than they had wanted.

In the first hunt allowed after the gray wolf was delisted from the endangered species list, hunters in Wisconsin exceeded the quota in every wolf harvest zone but one.

The total harvest exceeded the quota by 99.

In a new paper published by University of Wisconsin-Madison researchers, the bite to the wolf population took out a bigger chunk than the wolves killed in the hunt.

"Basically the concern is that the wolf hunt had killed so many wolves and we still knew that poaching was also increased," Adrian Treves said. "We wanted to let the agency know that there are additional wolves they are not aware of."

Treves is a professor of Environmental Studies at UW-Madison. He authored the paper along with UW-Madison Post-doctorate researcher Francisco J. Santiago-Ávila and doctoral candidate Karann Putrevu.

The team of three said they were inspired to take a look at Wisconsin's wolf numbers after the February hunt and to re-evaluate the impact of no longer protecting a species.

"Based on our study of additional mortalities of illegal killing that is not taken into account, that happened not only during the wolf hunt, but that happens immediately after delisting occurs," Santiago-Ávila said.

Plus, the methods used in the hunt like using snowmobiles and packs of hunting dogs have not been studied by modern researchers at all, according to Treves.

He added that the February timing was also additionally devastating.

"All of the hunting occurring during the wolf mating season would have direct effect both on wolves killed, and indirect effects like pack dissolution, packs disbanding, abortion of pregnancies in the breeding alpha females, and possible destruction of reproduction for many months of years ahead of us," Treves said.

"It's a public trust duty of state and federal and even tribal governments in the U.S. to preserve nature for future generations," he continued. "Secondly, apex predators like the wolf play super important roles in organizing and regulating native eco systems."

As for the argument that the hunts keep livestock safe from wolves, Santiago-Ávila said it's actually the contrary.

"There's a lot of evidence including from Michigan that any type of lethal methods, notwithstanding public hunts, which are going to exacerbate the issue spatially as well, that these types of lethal methods increase the risk of subsequent conflicts in adjacent areas," he said.

So knowing this, the goal for the team is both short and long, local and federal.

"Part of the primary goal is to hopefully effect change within the state of Wisconsin and to cause the agency to reconsider their plans for the November wolf hunt, but also to have this out there for any regulatory body that might have authority over wolves or other carnivore populations," Putrevu said.

At last check, the WI DNR said they "will continue to plan for a wolf harvest season to open on Nov. 6, 2021, while simultaneously working towards completing a 10-year wolf management plan to guide management decisions beginning in 2022."

In response to the study's publication, the WI DNR released this statement:

"We at the DNR stand behind our science, including our approach used to inform the February 2021 harvest decision, and remain confident in our continued ability to provide data-driven results to inform policy decisions involving wolves. Our approach has proven to be accurate in the past and we see nothing in this paper that makes us question that our methodology will continue to meet the needs of state wolf management.