Daniel Carr was asked to create two special coins for the commission of the Navy's latest attack submarine, the USS Colorado. 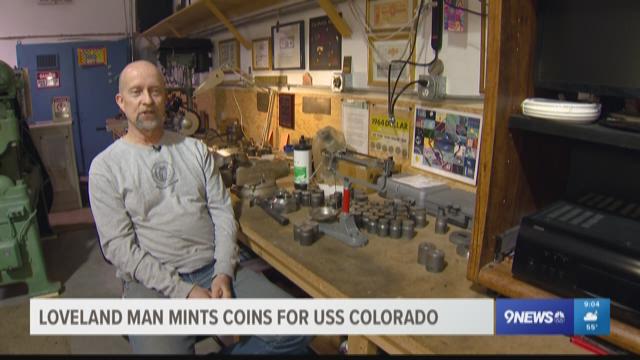 Making things memorable is the business of Daniel Carr at his workshop called Moonlight Mint.

"It's an honor to be able to do these," Carr said.

Carr was asked to create two special coins for the commission of the Navy's latest attack submarine, the USS Colorado. He created coins for the public to buy to raise funds for the creation of a second coin just for the crew.

"The crew members get a coin called a Plank Owner which is a traditional Navy term which means if you're the first crew of a ship, you sort of own the planks on the deck of the ship," Carr said. "The military has a long tradition of what they call 'challenge coins'."

Carr created an image using a digital sculpting program that he wrote himself and a coin press that at one time was used in the Denver Mint.

In years past, Carr has designed the state quarters for New York and Rhode Island.

"Any artist who creates a work of art that's appreciated and recorded in history is a goal of a lot of artists to be able to do that," Carr said.

He is a self-described military historian and World War II buff. Before he was an artist, he was a scientist. And, now, his hobby has become his career.

"I have a degree in mechanical engineering," Carr said. "I like doing artwork and collecting coins and I like the history and whatnot associated with them. You put the three together and the perfect thing is having a mint."