Josh Cordova got to talk shop with the pros before Sunday's game between the Colorado Rockies and Los Angeles Dodgers. 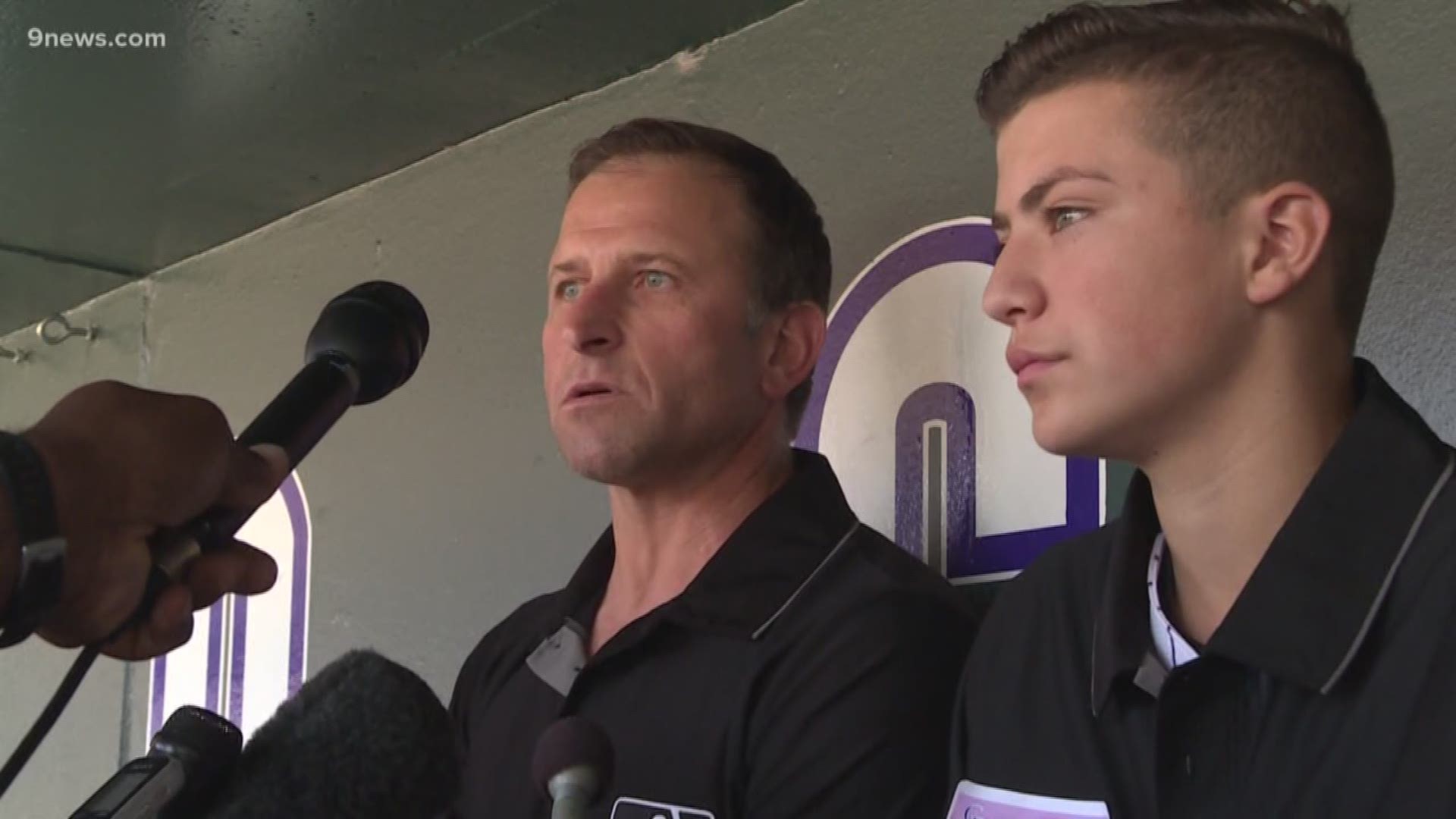 DENVER — A Major League Baseball umpire hopes a day at Coors Field will be an encouragement for a 13-year-old boy pursuing an umpiring career despite his connection to an upsetting incident a few weeks ago.

Josh Cordova was the umpire at a June 15th youth baseball game in Lakewood that ended with a brawl.

Both parents and coaches were involved.

It started after Cordova asked the adults from both teams to stop cursing.

Credit: AP
Josh Cordove, left, a 13-year-old baseball umpire from Denver, joins Major League Baseball umpire Chris Guccione, who is from Salida, Colo., on the diamond at Coors Field before the Colorado Rockies host the Los Angeles Dodgers in a baseball game Sunday, June 30, 2019, in Denver. Guccione invited the teen and his family to the game after the young man, who was officiating a youth baseball game that ended in a brawl with parents. (AP Photo/David Zalubowski)

When MLB umpire and Colorado native Chris Guccione heard the story, he wanted to support Cordova.

Credit: AP
Thirteen-year-old Josh Cordova, front, of Denver, joins Major League Baseball umpire Chris Guccione, of Salida, Colo., in touring the field before the Colorado Rockies host the Los Angeles Dodgers in a baseball game Sunday, June 30, 2019, in Denver. Guccione invited the teenage ump who was involved in a game that ended in an adult brawl. (AP Photo/David Zalubowski)

Guccione said he wanted to tell Cordova he made the right call, and he also wanted to encourage him to keep working as an umpire.

So, he invited the teen to hang out with the professional umpires working Sunday’s Rockies-Dodgers game at Coors Field.

Cordova also got some new gear from his new major league umpire friends.

Cordova said he’ll use that gear to officiate youth baseball games next season.

"So, I think I'm gonna continue umpiring for a while,” Cordova said. “And hopefully, [I’ll] make it [as a] professional like he is."

Credit: AP
Thirteen-year-old Josh Cordova, left, of Denver, heads on the diamond with home plate umpire Cory Blaser before the Colorado Rockies host the Los Angeles Dodgers in the first inning of a baseball game Sunday, June 30, 2019, in Denver. The young man was officiating a youth baseball game when a brawl broke out among adults in the nearby suburb of Lakewood, Colo. (AP Photo/David Zalubowski)

Twelve people have been cited for disorderly conduct in relation to the brawl.

They'll have to appear in Lakewood Municipal Court.

Both teams were punished, too.

The league ended their season early.

Those teams were mainly comprised of 7-year-olds.