Build-a-Bear shuts down single-day 'Pay Your Age' sale: It was so successful, it failed 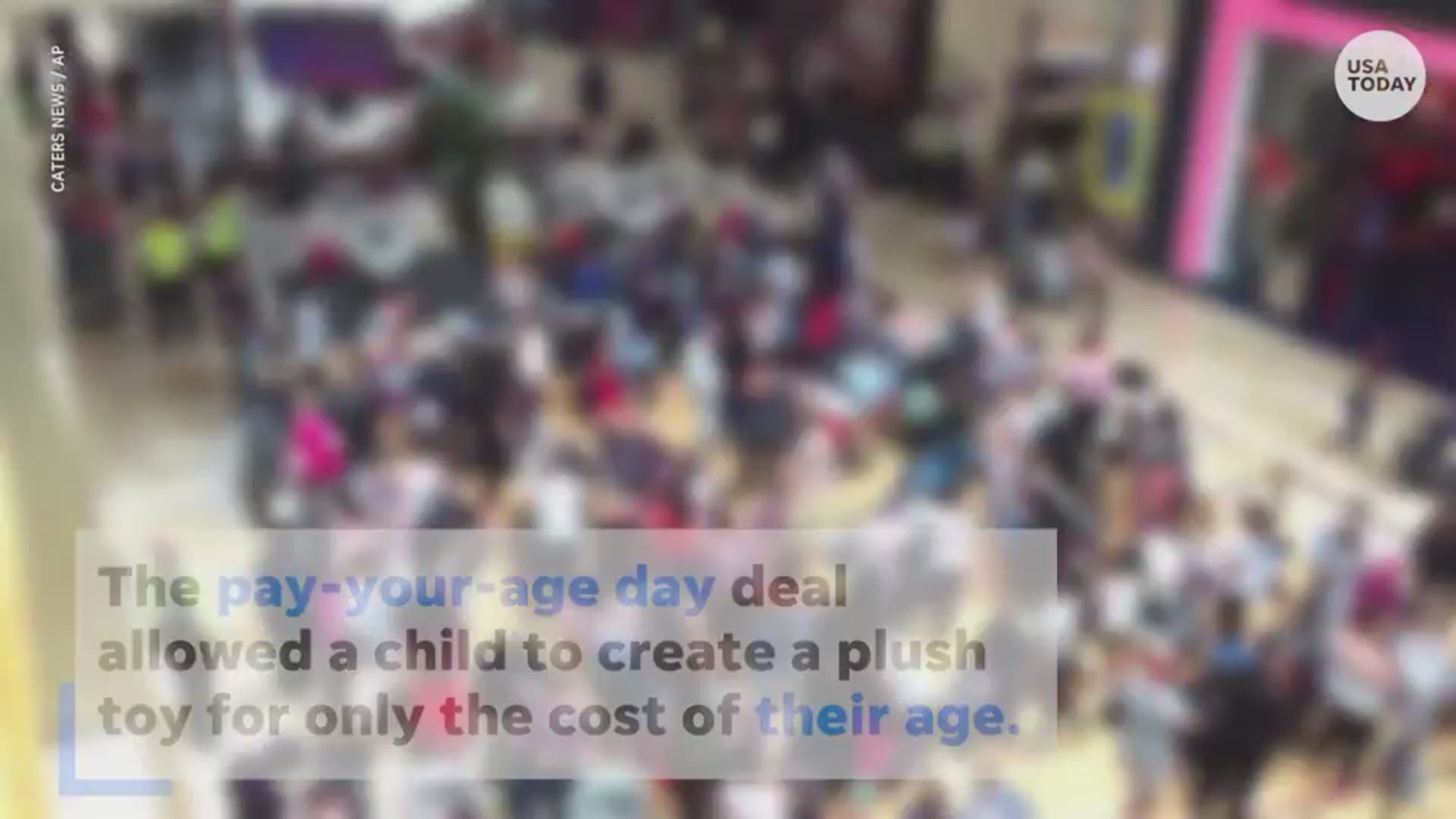 Build-a-Bear's one day sale was so successful it was shut down — in some places, just hours after it began.

"We have closed lines in our U.S. and Canada stores."

**Urgent Alert:
Per local authorities, we cannot accept additional Guests at our locations due to crowd safety concerns. We have closed lines in our stores. We understand some Guests are disappointed and we will reach out directly as soon as possible. https://t.co/aSFfPCcfsG pic.twitter.com/WZJ53tOAEH

Before the stores opened in the U.S., the long lines caused the company to publish a notice on social media that it would limit the number of people who could take advantage of the deal due to safety concerns.

When the deal was announced Monday, parents were overjoyed at the opportunity to walk in  and pick out a plush toy for the cost of their child's age.  (A typical bear costs between $10-$25 plus the cost of accessories.)

That excitement turned to disappointment Thursday as eager children were turned away.

Livid parents took to social media in the U.S. and the U.K. to rage.

@buildabear not being able to supply the demand on pay-your-age day is bad. making kids have to attend and being turned away at the door is disgusting. #promofail #PayYourAge #buildabear #angryparent

@buildabear @emma1885 angry and fuming, we are working parents, my wife is having to drive 100 miles after work to get to a store to take up the offer, and now we have a 2 year old in meltdown she's not getting a bear, perhaps your MD wants to consul her @BBCWatchdog #buildabear

1 / 8
Patrick Oehler/Poughkeepsie Journal
Joe Costa of Red Hook holds his son, Joey and is joined by daughter, Zoey at the Build-A-Bear Workshop for the "Pay Your Age" sale in the Poughkeepsie Galleria on July 12, 2018, in Poughkeepsie, N.Y.. The trio started waiting on line at 10 a.m. and were still waiting as of 4 p.m..

The line for #buildabear #payyourageday at @mallofamerica goes from storefront, through a packed rotunda and the entire length of #NickelodeonUniverse. And the line is now officially closed. pic.twitter.com/PYnYuTuMJC

Lines stretched outside Build-a-Bear stores with parents reporting waiting up to six hours to buy a plush toy, according to some social media reports.

Build-a-Bear representatives told All the Moms  that the response to the promotion was  "overwhelming and unprecedented."

"The response to our Pay Your Age Day event has been overwhelming and unprecedented in our 21-year history, and the safety of our Guests and associates is our top priority."

Customers should hear something ASAP

The company said it is "working to address the situation" and "will reach out directly to our valued guests as soon as possible."

To earn the Pay Your Age promotion, adults had to enroll in the free Build-a-Bear Bonus Club rewards program and provide an email address.

Build-a-Bear is expected to contact customers through their email.

Also note the sign. Seems the line at Build A Bear was closed due to overwhelming response to the 'Pay Your Age' promotion pic.twitter.com/3vwWG0Rwro

MORE: Shut out of Build-a-Bear Pay Your Age Day? Try this birthday month deal instead.