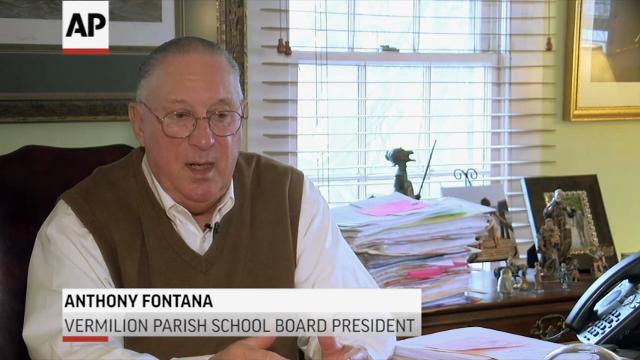 Credit: KATC-TV via AP
In this Monday, Jan. 8, 2018, image made from a video provided by KATC-TV, middle-school English teacher Deyshia Hargrave is handcuffed by a city marshal after complying with a marshal's orders to leave a Vermilion Parish School Board meeting in Abbeville, La., west of New Orleans. Hargrave was removed from the school board meeting, forcibly handcuffed and jailed after questioning pay policies during a public comment period.

LAFAYETTE, La. — A day after a Louisiana teacher was handcuffed and forcibly removed from a school board meeting for questioning the superintendent's pay raise, the school board received death threats, the board president said Tuesday.

On Monday, the Vermilion Parish (La.) School Board met to approve Superintendent Jerome Puyau's new contract. Deyshia Hargrave disagreed with the board's decision to give him a raise, saying teachers and other employees have not received raises in several years.

At one point, an officer with the Abbeville City (La.) Marshal’s Office approached Hargrave and told her to leave the room. A video showed Hargrave asking why she was being removed. The officer then escorts her out of the room. The video next shows Hargrave in handcuffs on the floor of the hallway, then being brought to a parking lot and placed in a police vehicle.

Hargrave, an English teacher at Rene Rost Middle School, was booked into the Abbeville City Jail on charges of resisting an officer and "remaining after being forbidden." She was later released on bond.

School board President Anthony Fontana said Tuesday that the board offices were temporarily locked down after it received death threats from across the world. 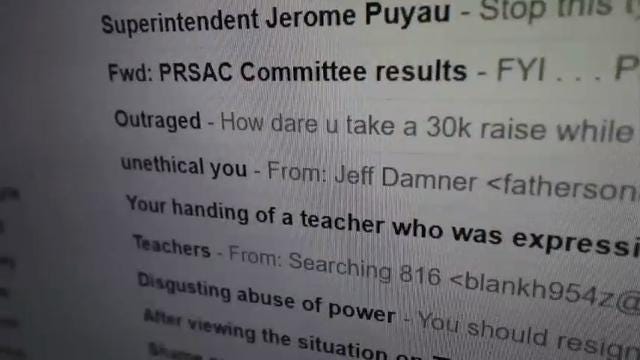 Fontana said the threats came from as far away as South America, Australia and England, as well as other U.S. states. The threats were reported to Vermilion Parish law enforcement and the FBI, Fontana said.

Fontana said the officer who arrested Hargrave acted appropriately and that he stands by him “100%.”

“His job is to make sure we have an orderly meeting,” said Fontana. “He knows what the law is. He knows what our policy is. … The officer did exactly what he is supposed to do.”

“Deyshia Hargrave’s expulsion from a public meeting and subsequent arrest are unacceptable and raise serious constitutional concerns," the ACLU said in a statement. "The Constitution prohibits the government from punishing or retaliating against people for expressing their views, and the fact that a schoolteacher was arrested at a public meeting of the school board is especially troubling.

"The ACLU of Louisiana will continue to investigate this incident and defend the constitutional rights of all Louisianans. We urge anyone whose rights have been violated to contact us.”

At least two board members are claiming the board treats women unfairly.

Women have several times been told to leave meetings, while men who speak out have not been removed, board member Laura LeBeouf told The Associated Press in a telephone interview Tuesday.

“When she realized she had to get out, she picked up her purse and walked out,” LeBeouf said. “Women in this parish are not getting the same treatment.”

Fontana disagreed saying he could recall two other times when a person was removed from a board meeting. One of the people is the husband of a board member, he said.

"As an organization that advocates for the dedicated school employees of Louisiana, we firmly denounce the mistreatment of Ms. Hargrave, a loving parent and dedicated teacher serving the students of Vermilion Parish. It is every citizen’s right to speak up for their beliefs. Any action that infringes upon this right is unlawful and unacceptable," the group said on its Facebook page.

Puyau said Tuesday that his new contract pays him an annual salary of $148,811, which he said would put him at No. 32 out of 69 superintendents in Louisiana in terms of salary.

His previous salary was $110,130, Puyau said. He added that he had not received a raise since being in the job. He was named Vermilion Parish superintendent-elect in July 2012. He took over the position permanently in January 2013.

“I have a serious issue with a superintendent or any person in a position of leadership getting any type of raise,” Hargrave said, according to video of the meeting. “I feel like it’s a slap in the face to all the teachers, cafeteria workers, any other support staff we have.

"We work very hard with very little to maintain the salaries that we have, and as I’ve been teaching the last few years, I’ve seen class sizes grow enormously … I just want to say, I don’t care if the performance targets were met. You’re making our jobs even more difficult and we’re jumping through hoops and we’re continuously meeting those goals.”

Abbeville City prosecutor Isaac Funderburk said Tuesday that he would not press charges against Hargrave.

According to the Louisiana Department of Education, Vermilion Parish teachers made an average of $47,041 per year in 2015-16. The Louisiana average for teachers was $48,462.

Puyau said it has been several years since the parish’s teachers or other employees received a raise.

Puyau said he had been advised not to discuss the meeting itself.

In recent years, Vermilion Parish has consistently been one of Louisiana’s top-rated public school districts. Most recently, the Louisiana Department of Education awarded it an ‘A’ grade and an overall score of 106.3, signaling high academic test scores among many of its students and schools.

However, Puyau’s time as superintendent has not been without question as some board members publicly expressed concern about his management style, staffing, financial decisions and strategic planning.

Hargrave was not immediately available for comment Tuesday. But several people expressed support for her and her comments on social media.