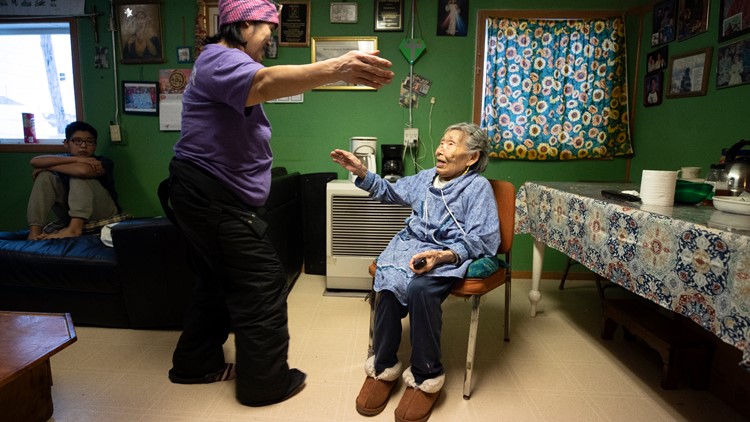 Photo by: AP
Jan. 20, 2020, Lizzie Chimiugak, right, gets a hug from her granddaughter Janet Lawrence at her home in Toksook Bay, Alaska. (AP Photo/Gregory Bull)

A Yup'ik elder born to nomadic parents in wild western Alaska just after the start of the Great Depression is set to be the first person counted in the 2020 Census. Lizzie Chimiugak has lived there for the last 90 years. Her family once lived in mud homes and lived a life following where they could find good hunting and fishing spots.

Completing the census form is not all the 90-year-old intends to do. She is also taking the opportunity to perform with Alaska Native dancers during the ceremony and raise the alarm of climate change and what it's doing to the fish and animals of western Alaska to other women at the ceremony.

RELATED: What you can do to avoid Census scams

While speaking the Yup’ik language of Yugtun, with family members serving as interpreters, Chimiugak said “Elders that were before me, if they didn’t die too early, I wouldn’t have been the first person counted,” the Associated Press reported.

Jan. 20, 2020 photo, a woman walks before dawn in Toksook Bay, Alaska, a mostly Yuip'ik village on the edge of the Bering Sea. (AP Photo/Gregory Bull)
AP

The U.S. census, a decennial event, is traditionally begun in rural Alaska out of necessity, something that began when the U.S. bought the territory from Russia in 1867. Census workers begin in this part of the country during this time of year because the ground is still frozen allowing for easier access and passage.