Alize Cornet said her boyfriend in the stands pointed out her shirt was on backwards. So she changed it, and the umpire called a code violation warning. 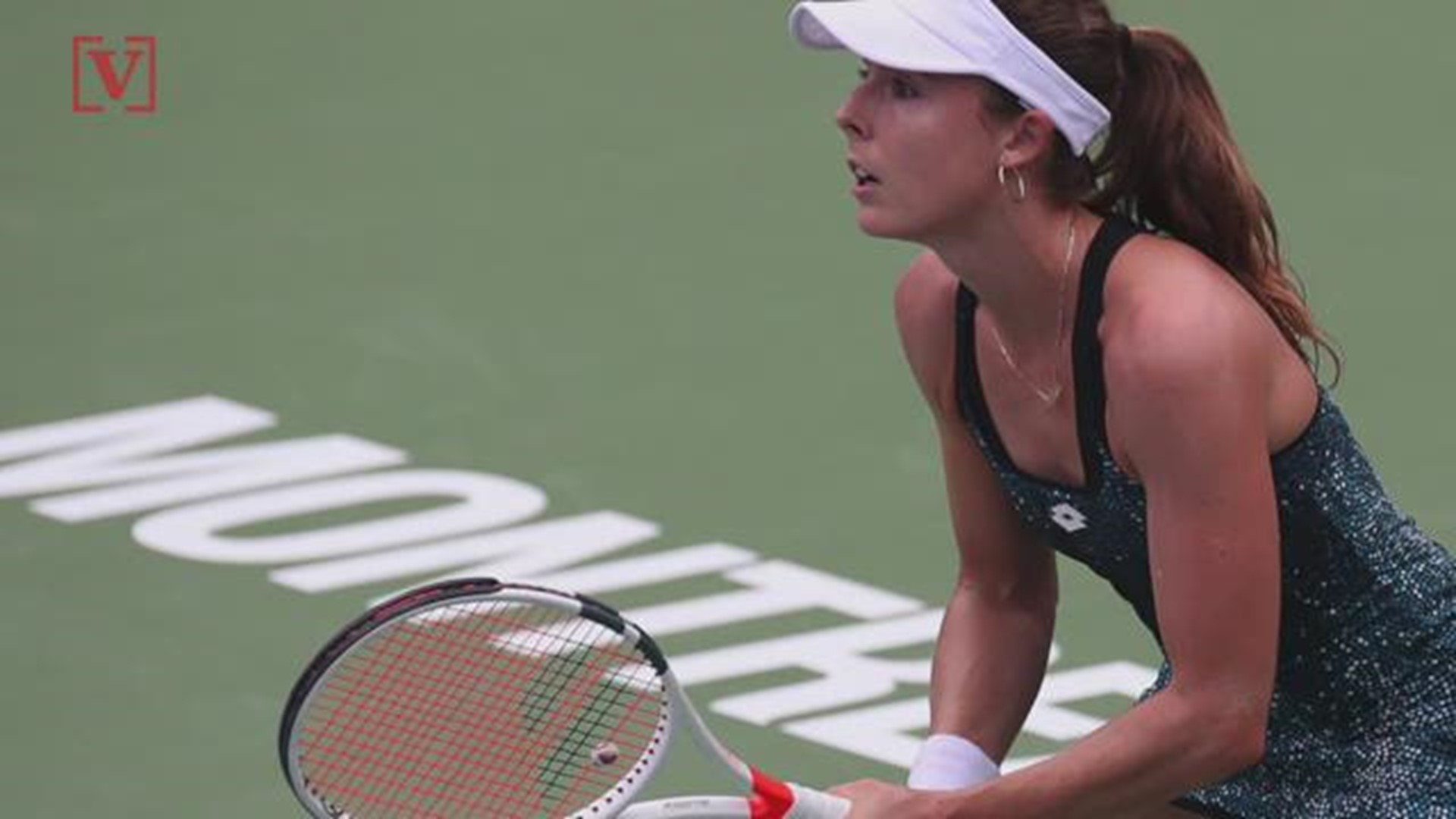 NEW YORK — It wouldn’t have been anticipated that a day after French player Alize Cornet lost her first-round match to Swede Johanna Larsson she’d be a hot topic at the US Open.

But that’s how it ended up Wednesday. During Tuesday's loss, Cornet came back on court after the 10-minute heat break between the second and third sets and prepared to start playing. While on the baseline, however, her boyfriend in the stands pointed out her shirt was on backwards.

That’s when the problem arose. She quickly removed her top, momentarily revealing a black-and-red sports bra, to put it on correctly. Umpire Christian Rask called a code violation warning for unsportsmanlike conduct on Cornet, which definitely caught her by surprise.

“I think just the umpire was probably overwhelmed by the situation,” said Cornet, after losing her doubles match Wednesday. “You know, we were all very hot outside. Maybe it just didn't make the right decision. Of course, I was surprised when I just changed T-shirt really quick and he gave me the code violation, I didn't expect it, and I told him it was pretty weird.

“I kept playing, I was trying to win my match. So I just got over it very fast. And now after thinking about it, 'Yeah, I'm just convinced that the umpire was making a mistake.’”

By Wednesday morning, the United States Tennis Association, who operates the US Open, issued a statement apologizing to Cornet.

“All players can change their shirts when sitting in the player chair," the statement said. "This is not considered a Code Violation. We regret that a Code Violation was assessed to Ms. Cornet yesterday. We have clarified the policy to ensure this will not happen moving forward."

Cornet was pleased the USTA was quick to comment.

“I think it's very fair from them (the USTA) to apologize to me,” Cornet said. “I really appreciate it. I mean, I think that the proportion that it took is huge. When I woke up this morning, I didn't think that this code violation would become so famous in less than 24 hours, and I'm very surprised about it, actually, to be honest.”

The women’s WTA Tour also responded, emphatic in its support of Cornet.

The code violation "was unfair and it was not based on a WTA rule, as the WTA has no rule against a change of attire on court," the WTA statement said. "The WTA has always been and always will be a pioneer for women and women’s sports. This code violation came under the Grand Slam rules and we are pleased to see the USTA has now changed this policy. Alize did nothing wrong.”

The umpire was likely using the 2018 Grand Slam Rule Book standards, which state a player is “entitled to two (2) breaks during a match” to change their attire. It also says additional breaks will be authorized but will be penalized "if the player is not ready to play within the allowed time. Any player abuse of this rule will be subject to penalty in accordance with the Unsportsmanlike Conduct section of the Code of Conduct.”

While there is nothing clear-cut in the rule that addresses a woman changing on court, it can be interpreted that just by having a rule that allows a female player to go off-court to change means they’re not meant to do so on the court.

Two-time Australian Open champion Victoria Azarenka, who won her second-round match Wednesday, finds it disturbing that in 2018 a woman changing her top on court even garners attention.

“If I would say my true feelings, it would be bleeped out,” Azarenka said. “It was nothing wrong. I couldn’t believe this was a conversation. I’m glad they apologized, and I hope this never happens again.”

Alize Cornet came back to court after 10 minute heat break. Had her fresh shirt on back to front. Changed at back of court. Got a code violation. Unsportsmanlike conduct..... 😳
But the men can change shirts on court. https://t.co/sCN4KDXYTb

The question of a double standard for women in the sport could extend to the recent comment from French Tennis Federation president Bernard Giudicelli that Serena Williams’ black catsuit, which she wore to help combat blood clots at the recent French Open, was disrespectful and wouldn’t be allowed in the future.

Cornet believes Giudicelli’s remarks about Serena’s outfit were far worse than her unsportsmanlike warning for briefly taking off her shirt on court.

“I think that now, of course it can be better, inequity between men and women, but I think we are on the right path,” she said. “I really believe it. Everybody is working in the same direction. I think we are doing all very good.

“Then we still have some people, like, the president of my federation that lives in another, you know, time, and can still do these kind of comments,” she added, smiling. “What Bernard Giudicelli said about Serena's catsuit was 10,000 times worse than what happened to me on the court yesterday, because he's the president of French Federation and because he doesn't have to do that.”