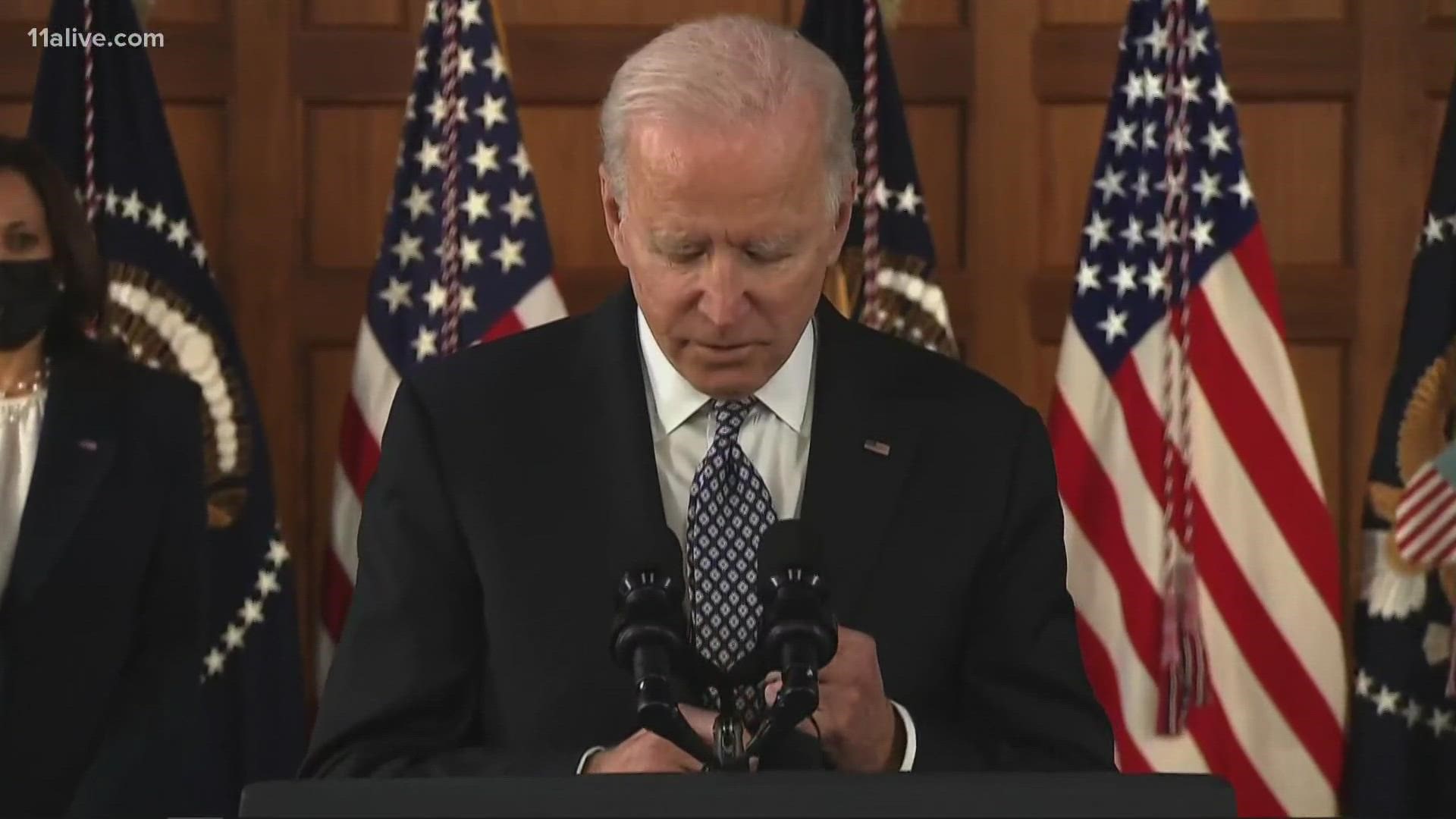 ATLANTA — President Joe Biden and Vice President Kamala Harris offered solace to Asian Americans and a reeling nation on Friday as they visited Atlanta just days after a white gunman killed eight people, most of them Asian American women.

The visit, during a nationwide spike of anti-Asian violence, has added resonance with the presence of Harris, the first person of South Asian descent to hold national office. And it comes as Biden on Friday expressed support for the COVID-19 Hate Crimes Act, a bill that would strengthen the government’s reporting and response to hate crimes and provide resources to Asian American communities.

“Hate can have no safe harbor in America,” Biden said, calling on Americans to stand up to bigotry when they see it. “Our silence is complicity. We cannot be complicit.”

Biden said "it was heart wrenching to listen to” Asian American state legislators and other community leaders discuss living in fear of violence during their meeting before he and Harris delivered remarks at Emory University.

“Racism is real in America. And it has always been. Xenophobia is real in America, and always has been. Sexism, too,” said Harris. “The president and I will not be silent. We will not stand by. We will always speak out against violence, hate crimes and discrimination, wherever and whenever it occurs.”

Their trip was planned before the shooting, as part of a victory lap aimed at selling the benefits of pandemic relief legislation. But Biden and Harris instead are spending much of their visit consoling a community whose growing voting power helped secure their victory in Georgia and beyond.

Activists have seen a rise of racist attacks. Nearly 3,800 incidents have been reported to Stop AAPI Hate, a California-based reporting center for Asian Americans and Pacific Islanders, and its partner advocacy groups, since March 2020.

Biden and Harris both implicitly criticized former President Donald Trump, who has repeatedly referred to COVID-19 as the “China virus.”

“For the last year we’ve had people in positions of incredible power scapegoating Asian Americans,” said Harris, “people with the biggest pulpits, spreading this kind of hate.” 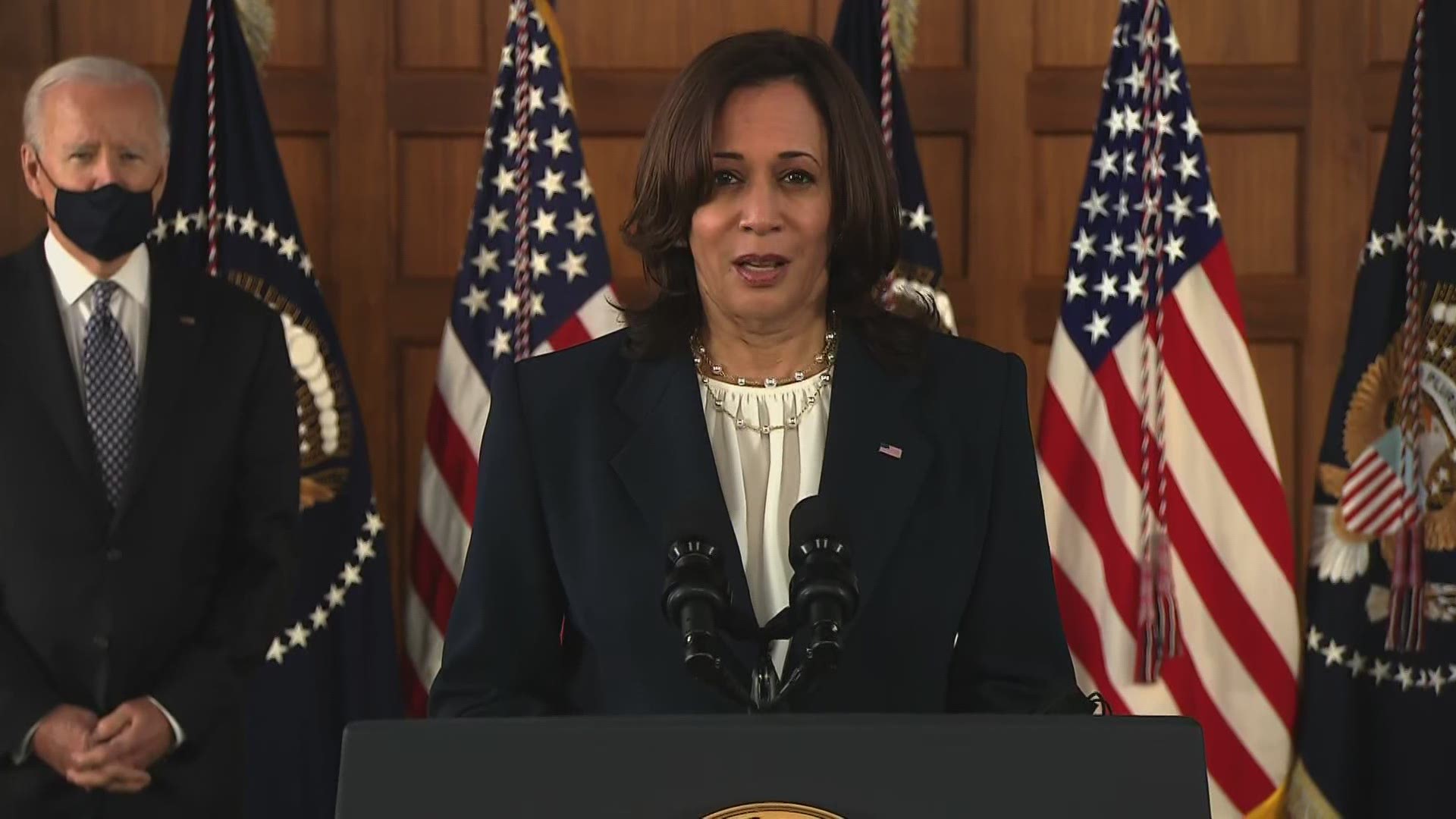 In his first primetime address to the nation as president last Thursday — five days before the Atlanta killings at three metro-area massage businesses — Biden called attacks on Asian Americans “un-American.”

Biden also used the visit to tour the headquarters of the Centers for Disease Control and Prevention, where he received a briefing on the state of the COVID-19 pandemic and delivered a pep talk to the agency’s scientists.

“We owe you a gigantic debt of gratitude and we will for a long, long, long time,” Biden said, adding that under his administration "science is back” driving policy to combat the virus.

Though the originally planned political event to tout the $1.9 trillion COVID-19 relief bill has been delayed, the White House confirmed that the president would still meet with Georgia voting rights advocate Stacey Abrams, Democrats’ likely 2022 candidate for governor, as Republicans in the state legislature push several proposals to make it harder to vote in the state. He will also meet with newly minted Democratic Sens. Jon Ossoff and Raphael Warnock and Atlanta Mayor Keisha Lance Bottoms.

As the fastest-growing racial demographic in the U.S. electorate, Asian Americans are gaining political influence across the country. In California, two Korean American Republican women made history with their congressional victories. The Congressional Asian Pacific American Caucus, typically dominated by Democrats, has its largest roster ever, including Asian American and Pacific Islander members and others who represent significant numbers of Asian Americans.

“We’re becoming increasingly more visible and active in the political ecosystem,” said Georgia state Sen. Michelle Au, a Democrat who represents part of the growing, diversifying suburbs north of Atlanta. Yet, Au said, “What I’ve heard personally, and what I have felt, is that people sometimes don’t tend to listen to us.”

Au said a White House spotlight, especially amid tragedy, is welcomed by a community often overshadowed in national conversations about diversity. She notes President Donald Trump and other Republicans merely brushed off charges of racism when they dubbed the coronavirus the “China virus” because of its origins.

“To have them talk about it in this way, so publicly, and to say AAPI, or to note that our communities are going through difficult times, is huge,” Au said.

As he boarded Air Force One on Friday morning, Biden, who was wearing a mask, stumbled several times up the stairs to the aircraft, before saluting the military officer who greeted him on the tarmac. Jean-Pierre said Biden was “doing 100% fine.”

Joe Biden just fell 3 times in a row trying to go up the stairs to Air Force One pic.twitter.com/gTUTckUH32