Trump, Biden lash out, interrupt each other throughout first presidential debate

The first presidential debate between President Donald Trump and Joe Biden got off to an contentious start. 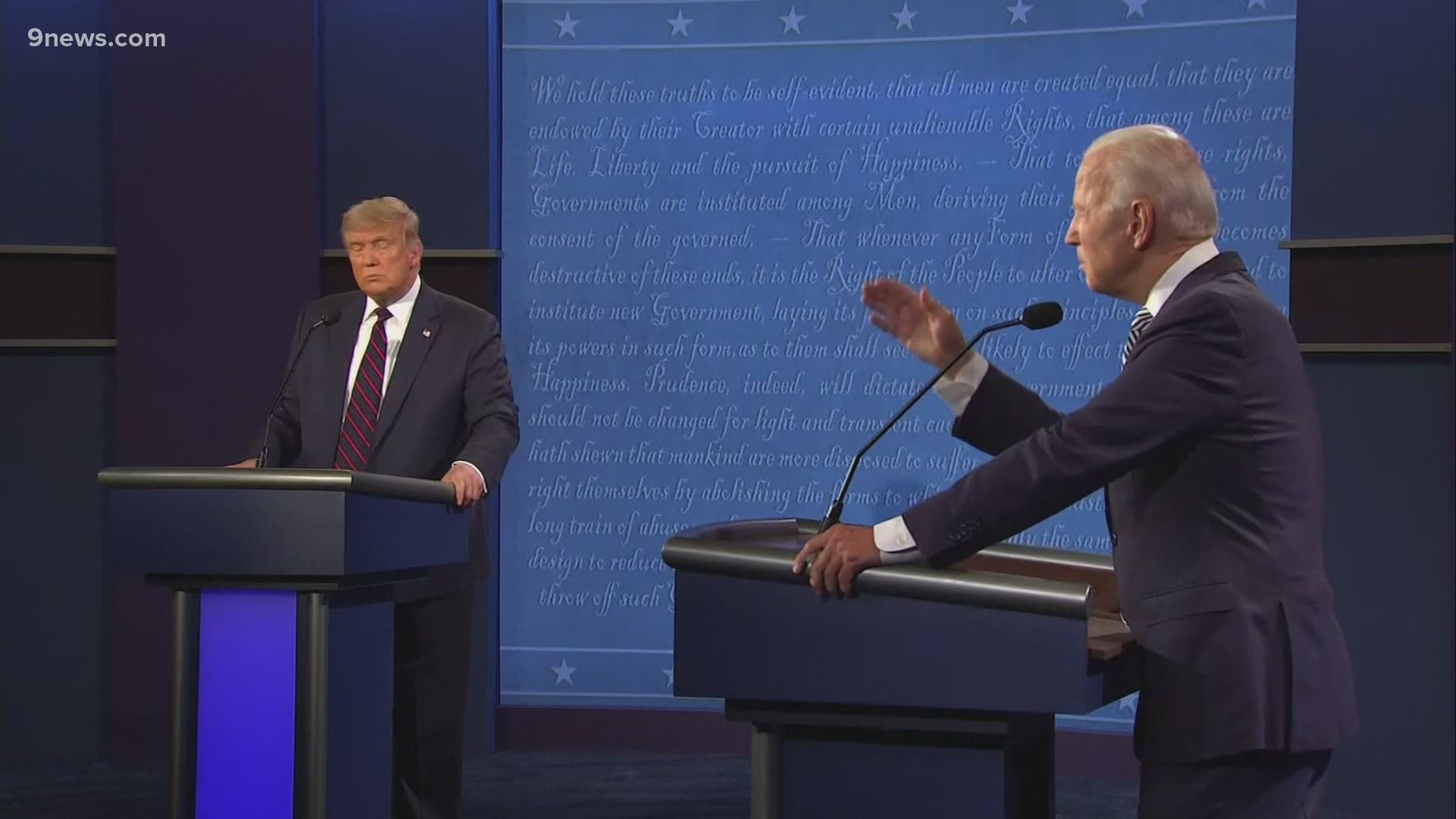 WASHINGTON D.C., DC —  It started out civilly enough, with President Donald Trump striding deliberately to his lectern, and Democrat Joe Biden nodding to his opponent and offering a “How you doing, man?”

But within 15 minutes, the debate had devolved into a series of endless interruptions, with Biden, seemingly unable to complete a sentence, finally blurting out, “Will you shut up, man?”

It was a chaotic and unusually bitter first presidential debate of the 2020 general election, made all the more unusual by the the ongoing coronavirus pandemic. There was no friendly handshake to kick things off, no room full of supporters in each candidate's court. Instead, the debate played out before a socially-distanced audience of about 100 people in a makeshift debate hall built in an atrium that had been previously set up as an emergency hospital for patients with COVID-19.

Even without the pandemic, the 90-minute faceoff was jarring.

Trump came out of the gate looking to challenge Biden and badgered him throughout the debate, drawing a string of rejoinders from the Democrat, including a plea to “just shush for a minute” at the half-hour mark.

At other points, the two candidates dialed down their rhetoric, only to resume their interruptions once again. When Trump was fielding a question about a report that he paid just $750 in federal income taxes in 2016 and 2017, Biden was the one interjecting: “Show us your taxes. Show us your taxes.”

Roughly 50 minutes into the debate, moderator Chris Wallace’s frustration came to a boil as he tried to regain control.

“Gentlemen, I hate to raise my voice, but why should I be any different than the two of you?” Wallace said, drawing some muffled laughter from both sides of the otherwise mostly quiet room.

The reaction from the mask-wearing crowd, warned not to make a sound, was inaudible on television, though there were several moments when they could be heard laughing or jeering inside the atrium — including when Biden used his “shut up” line.

But was no discernible response when the former vice president called the sitting president a “clown” and told him to “keep yapping.”

The television cameras also eliminated the difference in speaking volume between Trump and Biden that made Trump seem even more combative. Inside the atrium, Biden was sometimes hard to hear and spoke far more softly than Trump, until Trump attacked his family, and his volume rose. Biden also spoke more softly than Wallace, who repeatedly tangled with Trump as he tried to get the candidates to abide by the no-interruption rules their campaigns had agreed to —- sometimes making it seem like the debate was between them instead.

The debate was hosted by the Cleveland Clinic and Case Western Reserve University in the 27,000-square-foot (2,500-square-meter) atrium of the Sheila and Eric Samson Pavilion on the clinic’s Health Education Campus. Notre Dame, the original debate host, withdrew because of the pandemic.

Earlier this year, the building had been transformed into a temporary, 1,000-bed surge hospital, named Hope Hospital, for expected coronavirus patients. Though it never ended up needing to be used, the floor where the debate stage was built was not long ago lined with beds for patients and copper piping to bring in oxygen.

This time it was turned into a makeshift debate hall with a stage, red carpeting and elevated platforms for cameras. About 100 people watched, all of whom were tested for the virus and sat with plenty of distance between them. Guests were required to wear masks, though some — including members of the president's family — didn't. Seats were set with programs and antibacterial wipes.

Most in the crowd did abide by the social distancing and mask-wearing rules. At least one audience member even wore a bright red “MAGA” face mask, technically a violation of rules prohibiting campaign paraphernalia.

Some in Trump’s section tried to greet the first lady with a standing ovation as she walked in, but with the sparse crowd it didn’t quite come together.

The emptiness of the room only made the sharpness of the candidates’ verbal slugfest, which often took the tone of a schoolyard squabble, more notable.

“The fact is that everything he’s saying so far is simply a lie,” a flustered Biden snapped when Trump suggested that the vice president stole the nomination from Vermont Sen. Bernie Sanders. “I’m not here to call out his lies. Everybody knows he’s a liar.”

After just over 90 minutes, the faceoff was done — but not without more interruptions.

“This is the end of this debate," said Wallace, as Trump continued to boom his objections. “We're going to leave it there, to be continued," the moderator said as he finished what he deemed an “interesting” debate.