Members of Colorado's congressional delegation reacted to the large mob outside the U.S. Capitol that led to a lockdown. 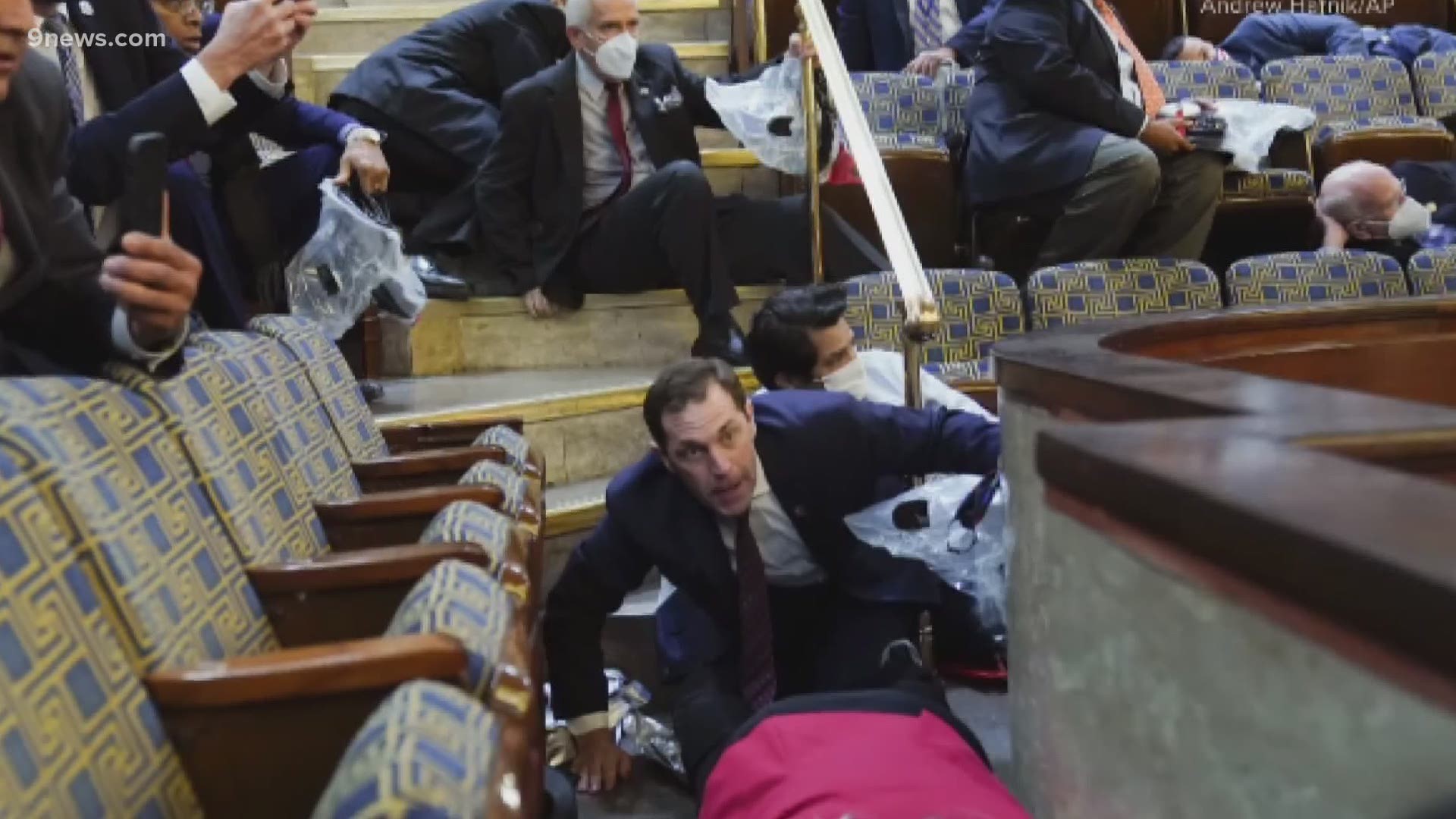 DENVER — Multiple members of Colorado's congressional delegation took to Twitter to respond to the Electoral College certification and the ensuing riot by supporters of President Donald Trump outside the U.S. Capitol that led to a lockdown.

Republican Rep. Ken Buck, who issued a statement in opposition to the effort by other members of his party to overturn the 2020 election, tweeted that the riot is "not who we are."

Every American has the right to peacefully protest.

But storming the US Capitol and attacking the brave men and women of the Capitol police force is wrong.

This is not who we are. pic.twitter.com/sRUMJleIEn

A spokesperson for Buck told 9NEWS' Marshall Zelinger that he heard shots fired but later during his interview on NBC News Buck said he believed the sound was glass breaking and was not gunfire.

"A bunch of us got heavy furniture and began barricading the doors to help the Capitol police," he said. "And then they told us they anticipated the House chamber would be breached so they asked us to evacuate."

He said they put on gas masks that had been stored under their seat as they were escorted out of the Capitol.

"I'm absolutely angry," Buck said. "This isn't the way this country operates. It's a disgrace for anybody to tolerate anybody to come in and try to shut down our government. It's absolutely disgraceful."

The riots prompted Buck and Democratic Colorado Gov. Jared Polis -- who are typically at odds politically -- to issue a joint statement condemning what occurred.

Last month, Buck joined a lawsuit in Texas challenging the results of the 2020 election.

"The alarming scenes that are unfolding in Washington are something you might expect to see in countries far from our shores, not in our nation's Capitol, and certainly not in the hallowed halls of the floors of our Congress," the statement read in part.

Joint bipartisan statement from @RepKenBuck and I on the events in Washington, D.C. today.

We are relieved that Colorado’s federal delegation is safe. We all must step up to protect the institutions of our republic, free and fair elections, and the rule of law. pic.twitter.com/JrXgPx3wxH

Later, when protests entered the Capitol building, Boebert said she was on lockdown, and condemned the violence. Nevertheless, she said she would continue support the Republican effort to dispute the electoral college vote.

1776 is the foundation of our country. Today I signed my name to a document to defend that foundation and our freedom.

The violence we saw today is inexcusable. Pray for America. pic.twitter.com/Y4ELkxJHGr

Rep. Jason Crow, a Democrat, representing Colorado's sixth Congressional district tweeted that the lockdown was an "outcome of Trump's presidency."

I’m currently in lockdown in the House chamber as the President of the United States incites his supporters to violence and to storm the Capitol. This is the outcome of Trump’s presidency.

Later, Crow tweeted an image from inside the Capitol, where photos showed him huddled on the ground with other representatives as protesters stormed the building.

This is what it has come to. pic.twitter.com/nYlGeKemAf

Colorado Secretary of State Jena Griswold likened what was occurring to a "coup."

What we are seeing is an attempted coup in America. It will fail, and democracy will prevail.

Rep. Ed Perlmutter told 9NEWS' Chris Vanderveen that he was in a safe location and that he expects Biden's electoral college count to move forward at some point.

JUST IN -- Just spoke to @RepPerlmutter on phone. He's in safe location.

Said this is simultaneously a dark day for US and a good day because he fully expects Joe Biden's Electoral College count to move forward at some point. #9news

A second tweet from Buck likened what was occurring to "anarchy."

This is not a protest, this is anarchy. This needs to stop, it’s un-American. pic.twitter.com/AXkDnMnMEz

Democrat Sen. Michael Bennet said he and his staff were safe, and that "Today’s attack on the Capitol and our democracy is dangerous and unacceptable."

I am safe and my staff is safe. We are currently in a secure lockdown. Today’s attack on the Capitol and our democracy is dangerous and unacceptable.

Democrat John Hickenlooper, Colorado's former governor and now a Senator, called it a "sad day for our country" and said he too was moved to a safe location amid the violence.

My staff and I are safe and in a secure lockdown. Grateful to Capitol Police for their work to protect us.

It’s a sad day for our country, but our democracy is stronger than the dangerous attack on the Capitol today.

Wednesday, he tweeted again saying he would support "any option" to remove Trump from office.

We’re all still shaken from yesterday’s violent attack on the US Capitol.

I’ve long believed that President Trump is unfit for office. He’s on his way out, but I’d support any option to remove him from power faster.

Democrat Diana DeGette also said she was safe and in an undisclosed location, and said she was escorted out of the Capitol with gas masks in hand.

With our gas masks in hand, Rep. Scott Peters and I were briskly enroute from the Capitol to an undisclosed location. pic.twitter.com/DMfSK3C3lW

This comes as scores of protesters gathered outside the Colorado Capitol on Wednesday afternoon in an effort to protest Biden's victory and support Trump, who has not conceded the election.

In ensuing statements, the president asked the protesters to go home but continued to baselessly assert that he had won, despite state elections officials and his own justice department saying otherwise.