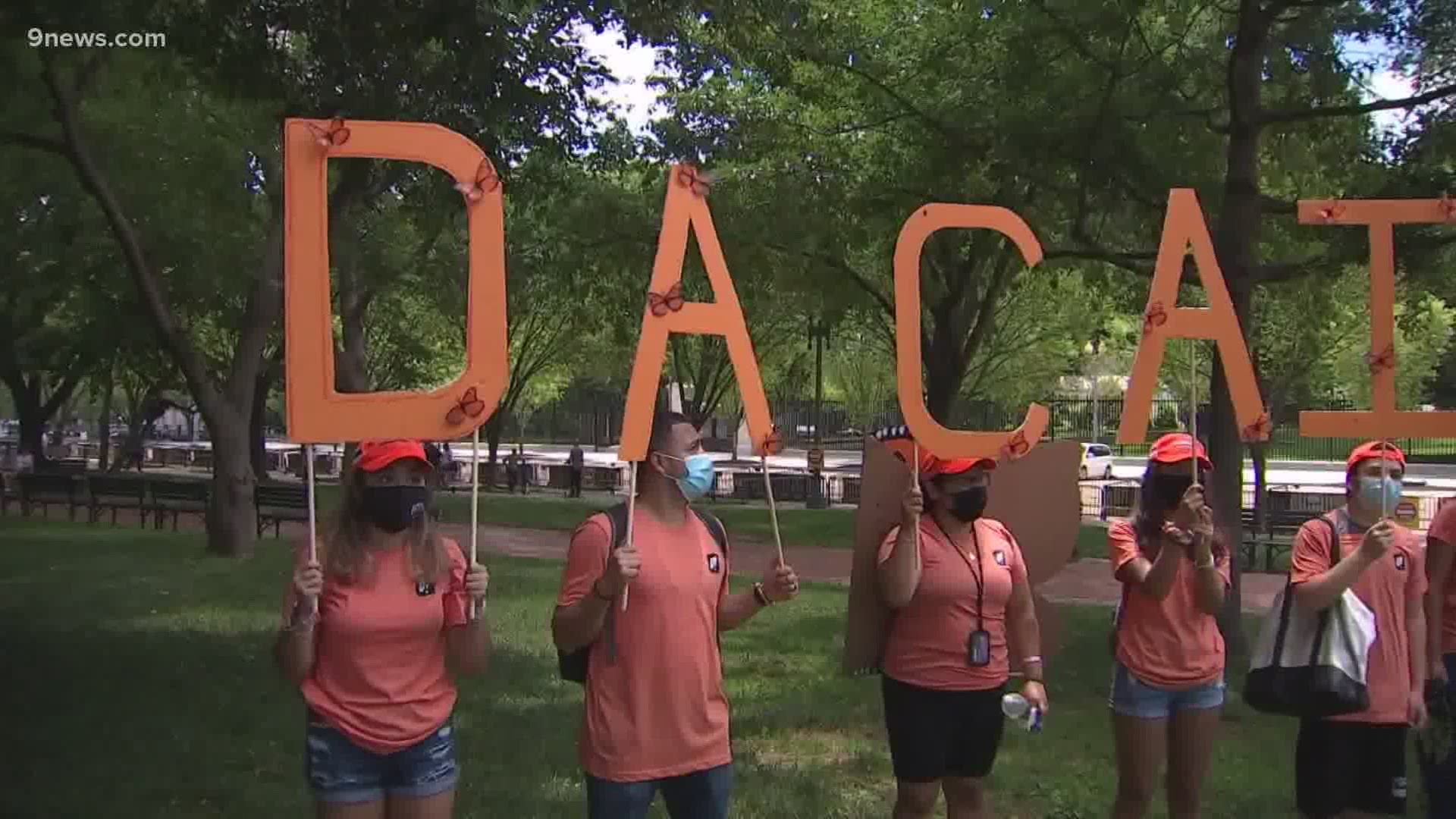 DENVER — A U.S. federal judge declared a program that protects young people brought to the United States as children from different countries illegal.

Those already enrolled in the program can continue to renew their permit every two years.

Jesus Castro in Fort Collins is one of those people. He was born in Los Mochis, Sinaloa in Mexico, but has called the United States home since he was 13 years old.

Castro works for the nonprofit, Fuerza Latina and helps others navigate the application process for DACA.

"I saw the poverty of my country; I saw the struggle," he said. "There was a lot of violence, and we didn't have a choice. We had to move."

This ruling is just the latest development in an already stressful situation for DACA recipients, also known as "Dreamers." Castro said he has noticed long delays in the renewal and approval process for DACA applications from USCIS since December.

"They ask you to send your DACA application about five or six months before it expires," said Castro. "We’re doing what we’re supposed to do, so in five or six months or less, we expect a new permit. That has not been the case for thousands of DACA recipients around the country, thousands of DACA recipients around Colorado. It’s been very difficult."

In a statement to 9NEWS, USCIS said new and renewal DACA requests are currently within normal processing time goals. The statement also said "Due to the COVID-19 pandemic and other factors – including an increase in applications and petitions – USCIS is experiencing delays for some applications and petitions filed, with processing times affected by several variables including demand and capacity."

Castro said he received approval on his renewal the same day his permit expired. "It barely made it, but it was really stressful. There’s people that they have been waiting since December."

Like many other "Dreamers," Castro still hopes for the day when a pathway to citizenship becomes a reality. That hope was diminished a little more after the ruling that halted approval of new DACA applicants.

Biden's statement also said, "The Department of Justice intends to appeal this decision in order to preserve and fortify DACA. And, as the court recognized, the Department of Homeland Security plans to issue a proposed rule concerning DACA in the near future."

Sulma Mendoza, director of Immigration for Justice and Mercy Legal Aid Center, an organization that helps low-income persons with free legal services, said that although USCIS cannot approve new DACA applications, applicants can still continue to submit them. However, applicants must understand that those applications will be in a state of pause.

"Applicants will need to decide for themselves if they want to file, and provide USCIS with their information, and pay the $495 application fee, knowing their applications will not be processed, Mendoza said."

Mendoza also said that those already enrolled in the program can travel outside of the country with advance parole, but they must understand that with the latest court ruling this would be riskier.

"It has always been a risk to travel with advance parole because USCIS can decide to revoke the AP and the applicant will be stuck outside of the U.S.," Mendoza said. "There might be a higher risk with the latest ruling out of Texas finding the DACA program is unlawful."

Mendoza encourages new applicants to "continue to engage with advocacy groups to achieve comprehensive changes to our current immigration laws."

"That can be really anxiety inducing for young people and their families," Chapin said.

Chapin also explained the reasoning behind Hanen's ruling and pointed to his position that President Barack Obama violated the Administrative Procedure Act in 2012 when he created the DACA program by failing to allow for a notice of comment procedure to take place.

"The second holding that he made in the ruling is that president Obama exceeded his executive authority by creating a program that actually conferred immigration benefits to people who are unlawfully here," Chapin said.

Chapin said she does not believe president Obama broke the law, instead he set priorities for deportations, which she said is within his executive authority.

"President Obama said young people who were brought here to the United States by their parents who have grown up in the united states, who go to school, serve in our military, who have jobs – virtually no criminal history – they are not a priority for deportation," she said. "Instead, we're going to focus our resources to people with serious felony convictions, people who are recent entries – people who have a lot of immigration violations in the past."

Chapin said she strongly believes the 5th Circuit Court of Appeals will affirm Judge Hanen's ruling, which will send the appeal to the Supreme Court.

"Then the Supreme Court has to agree to hear it, and if they don't, then we're stuck in this terrible limbo," she said. "What really needs to happen is the measure needs to get through Congress."

Castro said that without the protections DACA provides, the thousands of people enrolled in the program are at risk of losing their livelihoods.

DACA is a priority for DHS and we know DACA recipients have and continue to play an important role in helping enrich our nation with their talents through entrepreneurship, innovation, public service, arts and education, and building strong families and communities. USCIS also knows that policies and procedures have a direct impact on the lives of DACA recipients and we are committed to minimizing processing delays to help facilitate access to benefits and restore confidence in the system. USCIS is also increasing public outreach efforts to ensure that immigrant communities across the country have access to information on how to apply for benefits for which they may be eligible.

“To that end, USCIS is actively working to preserve and fortify DACA as directed by the Presidential Memorandum, Preserving and Fortifying DACA, issued on Jan. 20, 2021. Prior to December 2020, USCIS was not permitted to accept DACA initial requests for over three years. Despite the challenges of operating during the COVID-19 pandemic and with processing times affected by several variables including demand and capacity, USCIS’s historical data shows the median processing time for DACA renewals (through May 31, 2021) is less than 2 months (1.6 months or approximately 48 days), and the median processing time for initial (new) DACA requests is approximately 5-6 months (5.2 months). Upon the court-ordered restart of processing DACA initial requests, there was a significant volume of new DACA filings due to the pent-up demand from over three years of not accepting new DACA initial requests.

"USCIS has worked to maximize efficient processing, and is evaluating additional strategies to limit delays.”