The retailer will also end sales of high-capacity magazines and sales of guns to people under 21 years old. 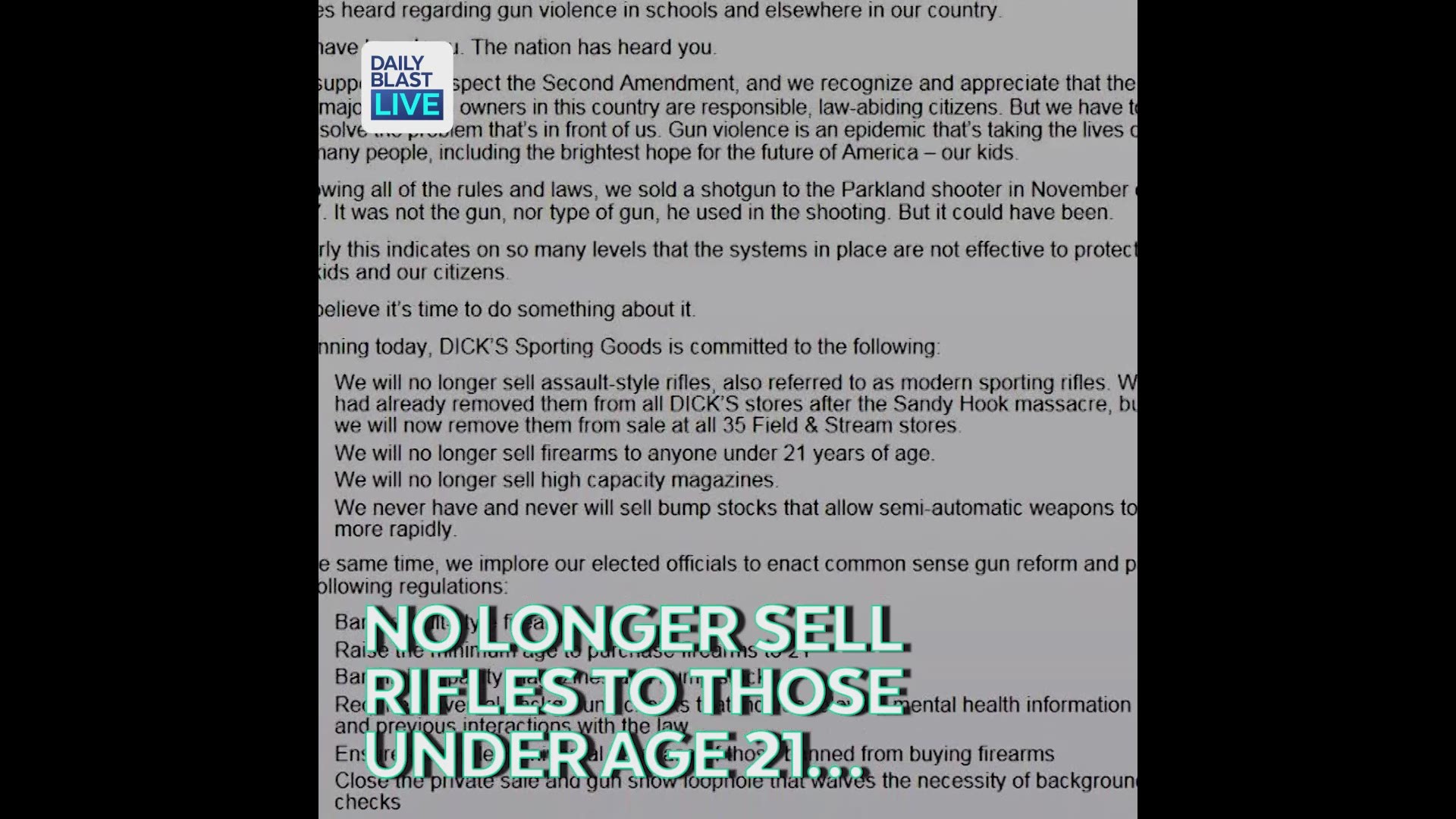 Dick's Sporting Goods is banning sales of assault weapons across all its stores after the Parkland, Fla. school shooting.

The nation's largest sporting goods retailer announced the move Thursday in an open letter and an appearance by CEO Ed Stack on Good Morning America.

The retailer will also end sales of high-capacity magazines and sales of guns to people under 21 years old.

Assault-style weapon sales ended at Dick's-branded stores after the Newtown, Conn. school shooting in 2012. But the company was still selling them at its 35 Field & Stream locations, which specialize in hunting and outdoors products.

"As we looked at what happened down in Parkland, we were so disturbed and saddened by what happened, we felt we really needed to do something," Stack told GMA's George Stephanopoulos.

Chairman and CEO of Dick's Sporting Goods tells @GStephanopoulos why the company has decided to no longer sell assault style rifles or firearms to anyone under 21 years of age, and no longer sell high capacity magazines. pic.twitter.com/xiuMfqIZLd

Stack acknowledged that the Parkland school shooter had purchased a shotgun at one of the company's stores in November. Though the killer did not use the gun in the shooting, the realization served as a catalyst for action.

"We did everything by the book, we did everything that the law required and still he was able to buy a gun," Stack said. "When we looked at that, we said, ‘The systems that are in place across the board just aren’t effective enough to keep us from selling someone a gun like that.’"

Although the decision drew praise from gun-control proponents, don't expect it to make a big impact on gun sales. Sales of guns and ammunition are "highly fragmented and characterized by a large number of small players," according to market-research firm IBISWorld.

But thoughts and prayers are not enough. We have to help solve the problem that's in front of us. Gun violence is an epidemic that's taking the lives of too many people, including the brightest hope for the future of America - our kids. https://t.co/J4OcB6XJnu pic.twitter.com/6VoKwJe8tH

At the same time, we implore our elected officials to enact common sense gun reform and pass the following regulations: https://t.co/J4OcB6XJnu pic.twitter.com/VUuFKkyk6c

The four largest gun sellers control only 5% of the market. The U.S. had about 6,550 gun shops as of November 2016. And although online sales have increased in popularity, federal regulations requiring local dealers to fulfill gun purchases have empowered mom-and-pop shops.

Stack described Dick's change as a direct response to the Parkland students who have pushed for change following the shooting. He said the company remains a "staunch" supporter of Second Amendment rights, adding that he owns a gun himself.

The move comes as businesses are coming under pressure to cut ties to the gun-rights lobby. Several major companies have cut discounts for members of the National Rifle Association, including Delta Air Lines, United Airlines, Enterprise, Avis Budget, Hertz, TrueCar, MetLife and Symantec.

Asked whether Dick's is prepared for a backlash, Stack said yes.

The company also took the unusual step of calling for Congress to ban assault weapons, raise the minimum wage to purchase a gun to 21 and outlaw sales of high-capacity magazines and bump stocks.

The retailer asked Congress to impose "universal background checks" and "ensure a complete universal database of those banned from buying firearms."

"We hope others join us in this effort to let our kids know that their pleas are being taken seriously," Stack said in his open letter.

Cabela's and Bass Pro Shops, which are now the same company, continue to sell assault-style weapons and high-capacity magazines.

Representatives of Cabela's and Bass Pro Shops were not immediately available for comment.

Dick's Sporting Goods investors did not appear to be concerned by the financial implications of the decision. The company's stock rose 0.6% shortly after the opening bell.