The leading presidential challenger made the statement at an Alabama church as it commemorated the 56th anniversary of a bombing there that killed four black girls. 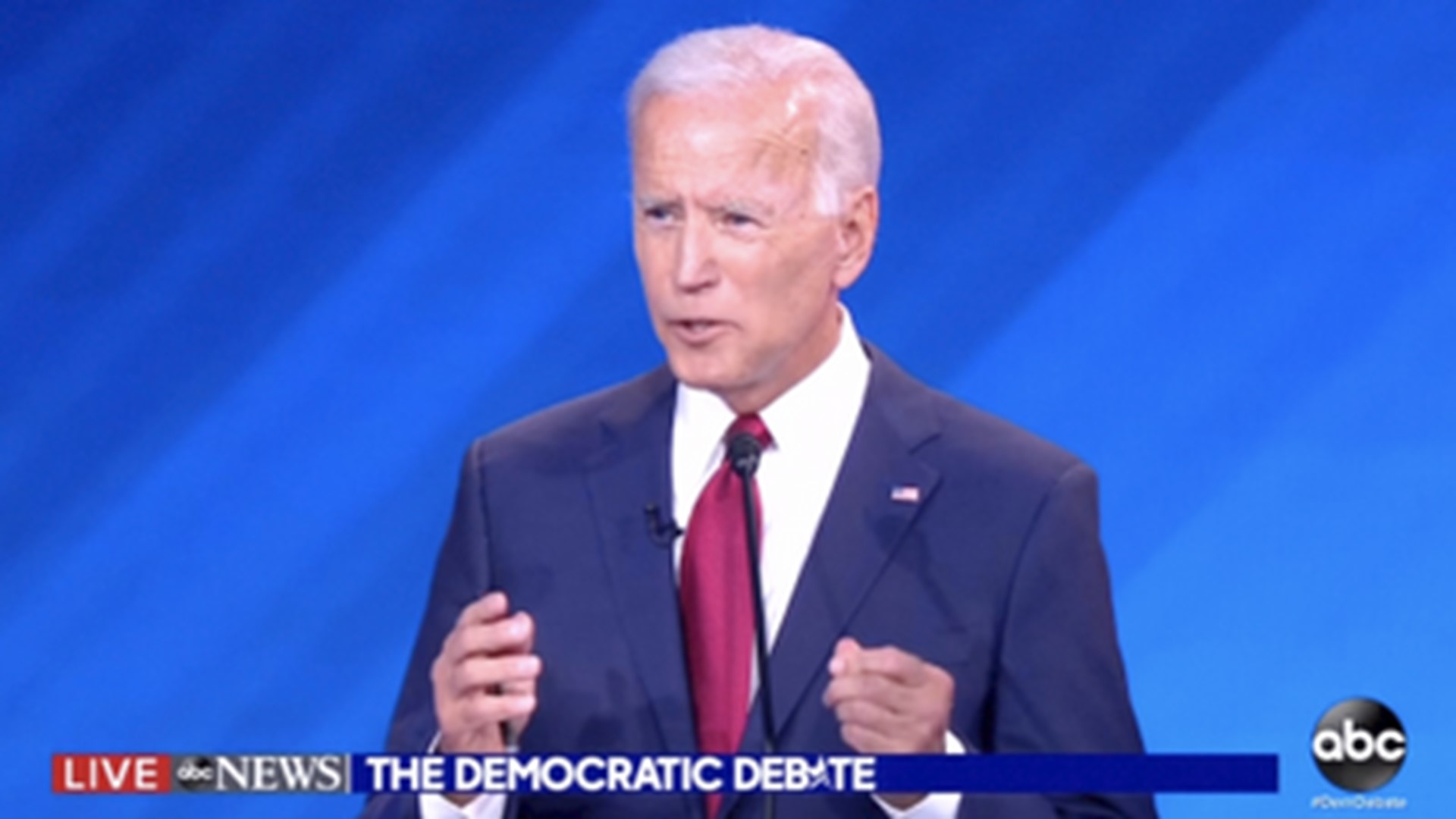 BIRMINGHAM, Ala. — Visiting a black church bombed by the Ku Klux Klan during the civil rights era, Democratic presidential candidate Joe Biden on Sunday framed current racial tensions as part of an enduring struggle that is older than the nation.

"In a centuries long campaign of violence, fear, trauma, brought upon black people in this country, the domestic terrorism of white supremacy has been the antagonist of our highest ideals since before the founding of this country," Biden told the 16th Street Baptist Church congregation in downtown Birmingham as they commemorated the 56th anniversary of the bombing that killed four black girls in 1963.

"It's in the wake of these before-and-after moments," Biden added, "when the choice between good and evil is starkest."

Credit: AP
Presidential candidate and former Vice President Joe Biden, left front, joins the congregation of 16th Street Baptist Church in Birmingham, Alabama, as they sing “We Shall Overcome” at Sunday worship on Sept. 15, 2019. Biden was the keynote speaker as the congregation commemorated the 56th anniversary of the Ku Klux Klan bombing that killed four black girls in the congregation during the height of the civil rights movement. Biden is on the front pew along with Alabama Sen. Doug Jones, who as a federal prosecutor decades after the bombings prosecuted two of the responsible Klansmen, and Birmingham Mayor Randall Woodfin. (AP PhotoBill Barrow)

Biden's appearance comes at an inflection point for Democrats' 2020 leader in the polls. He is trying to capitalize on his strength among older black voters while navigating criticism from some African American and other nonwhite leaders, particularly younger ones, who take a skeptical view of the 76-year-old white man's willingness and ability to address systemic racism.

During his 20 minutes at the pulpit, Biden condemned institutional racism as the direct legacy of slavery and lamented that the nation has "never lived up to" the ideals of equality written into its founding documents. But then he added a more personal note — perhaps the closest he would come to addressing his detractors. "Those who are white try," Biden said, "but we can never fully understand."

The former vice president called out the names of the bombing victims — Addie Mae Collins, Denise McNair, Carole Robertson and Cynthia Wesley — and he drew nods of affirmation as he warned that "the same poisonous ideology that lit the fuse on 16th Street" has yielded more recent tragedies, including in 2015 at a black church in South Carolina, in 2018 at a Jewish synagogue in Pittsburgh and in August at an El Paso, Texas , Walmart frequented by Latino immigrants.

The Birmingham church, Biden said, offers an example to those communities and a nation he said must recommit itself to "giving hate no safe harbor — demonizing no one, not the poor, the powerless, the immigrant or the 'other.'"

From his long time in government, first as a senator and then vice president to Barack Obama, the first black president, Biden has deep ties in the black community. Though Biden didn't mention President Donald Trump in his remarks, he has made withering critiques of the president's rhetoric and policies on race and immigration a central feature of his candidacy.

Yet Biden sometimes draws searing appraisals from younger nonwhite activists who point to complexities in his record. That includes his references to working productively alongside segregationist senators in the 1970s to distrust over his lead role in a 1994 crime law that critics frame as partially responsible for mass incarceration, especially black men.

The dynamics flared up again Thursday after Biden, during a Democratic debate, offered a sometimes incoherent answer when asked how the nation should confront the legacy of slavery. At one point, Biden suggested nonwhite parents use a play a record player to help their children with verbal and cognitive development. That led to a social media firestorm and commentary that Biden takes a paternalistic view of black and brown America even as he hammers Trump for emboldening more obvious forms of racism.

Author Anand Giridharadas called Biden's answer "appalling — and disqualifying" for "implying that black parents don't know how to raise their own children."

Parishioners wielded their cellphones when he arrived with Alabama Sen. Doug Jones, a white politician beloved in the church for his role as the lead prosecutor who secured convictions decades after the bombing occurred. The congregation gave Biden a standing ovation when he completed his remarks.

Alvin Lewis, a 67-year-old usher at 16th Street Baptist, said the welcome doesn't necessarily translate to votes. But as Lewis and other congregants offered their assessment of race relations in the United States under Trump, they tracked almost flawlessly the arguments Biden has used to anchor his campaign.

"Racism has reared its head in a way that's frightening for those of us who lived through it before," Lewis said, recalling that he was at home, about "20 blocks from here" when the Klan bomb went off at 10:22 a.m. on Sept. 15, 1963. "No matter what anyone says, what comes out of the president of the United States' mouth means more than anything," Lewis added, saying Trump "has brought out some nastier times in this country's history."

Antoinette Plump, a 60-year-old who took in the service alongside lifelong member Doris Coke, 92, said racism "was on the back burner" until Trump "brought out all the people who are so angry."

Coke, who was at the church on that Sunday in 1963, said, "We've come a long way." But she nodded her head as Plump denounced Trump.

Nearby sat Fay Gaines, a Birmingham resident who was in elementary school in 1963 — just a few years younger than the girls who died.

Gaines said she's heard and read criticisms about Biden. Asked whether she'd seen his "record players" answer in the debate, she laughed and said she did. But he remains on her "short list" of preferred candidates.

"I think there may just be a generational divide," she said of the reaction. "People who lived through all these struggles maybe can understand how to deal with the current situation a little better."

That means, she said, recognizing a politician's core values.

RELATED: Elizabeth Warren has her own plan for everything - except this