The White House is assessing whether Biden can strike a deal with Republicans or whether he will go it alone with Democrats. 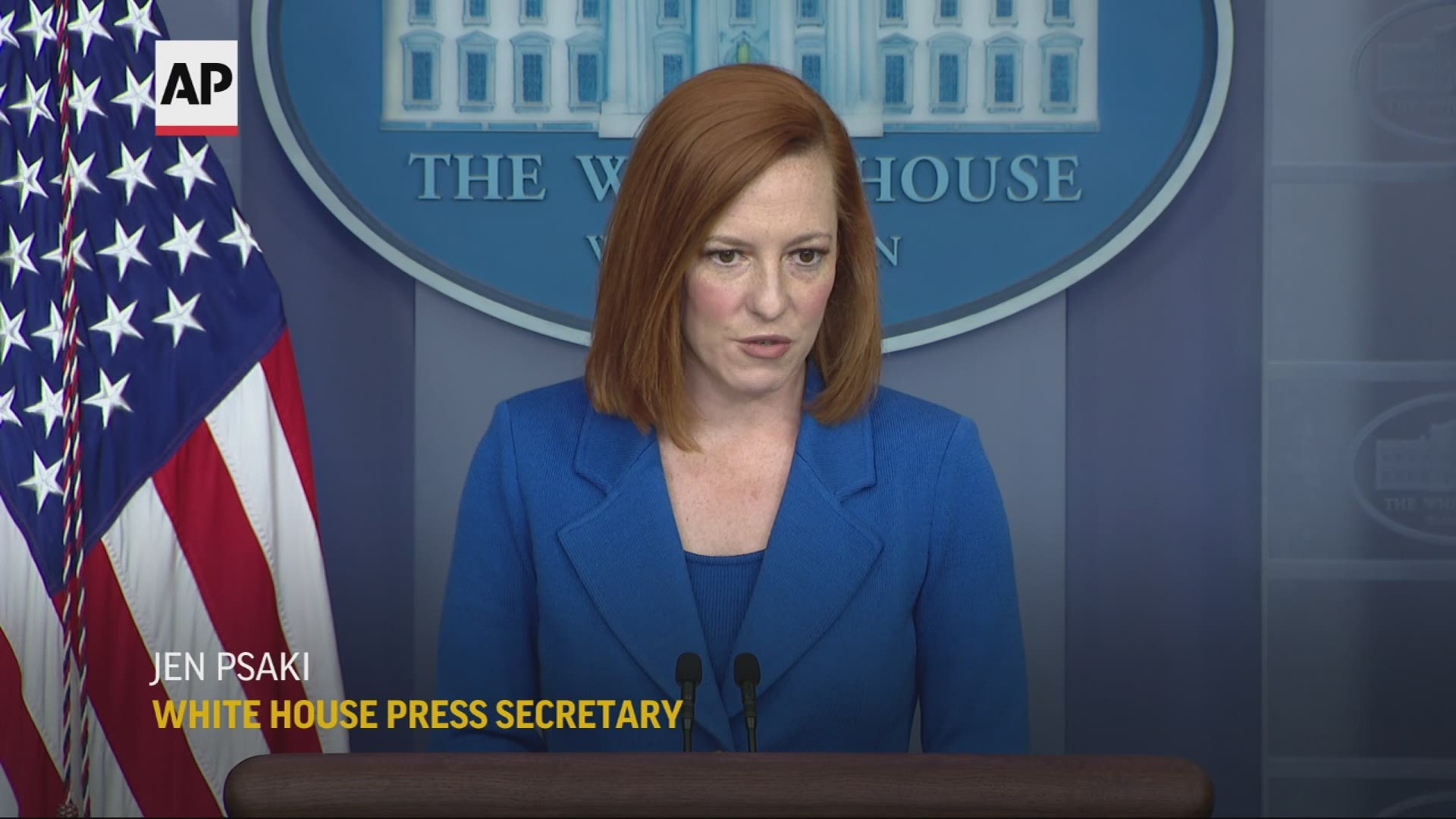 WASHINGTON — Senate Republicans revived negotiations over President Joe Biden’s sweeping investment plan, preparing a $1 trillion infrastructure proposal that would be funded with COVID-19 relief money as a counteroffer to the White House ahead of a Memorial Day deadline toward a bipartisan deal.

The Republicans said Tuesday they would disclose details of the new offer by Thursday, sounding upbeat after both sides had panned other offers.

At the White House, press secretary Jen Psaki declined to address the new plan but said: "We expect this week to be a week of progress.”

Talks over the infrastructure investment are at a crossroads as Biden reaches for a top legislative priority. The White House is assessing whether the president can strike a bipartisan deal with Republicans on his American Jobs Plan or whether he will try to go it alone with Democrats if no progress is made in the days ahead.

Yet the administration and the GOP senators remain far apart over the size and scope of the investment needed to reboot the nation's roads, bridges and broadband — but also, as Biden sees it, the child care centers and green energy investments needed for a 21st-century economy. They also can't agree on how to pay for it.

Biden had dropped his $2.3 trillion opening bid to $1.7 trillion, and Republicans had nudged their initial $568 billion offer up by about $50 billion late last week, but talks teetered as both sides complained the movement was insufficient.

The Republicans have uniformly rejected Biden’s plan to pay for the investments by raising the corporate tax rate, from 21% to 28%. Instead, the GOP senators want to shift unspent COVID-19 relief funds to infrastructure, which may be a nonstarter for Democrats. Republicans also want to rely on gas taxes, tolls and other fees charged to drivers to pay for the highways and other infrastructure.

The Republicans said their new proposal would be aligned with what they discussed with Biden in their first Oval Office meeting almost two weeks ago.

“We are anxious to have a bipartisan agreement,” said Sen. Shelley Moore Capito, R-W.Va., who is leading the group of GOP negotiators.

A GOP aide who spoke on condition of anonymity to discuss the private talks said the price tag would be $1 trillion over eight years, paid for by tapping funds that have been allocated as part of COVID-19 relief but not yet spent. The aide said about $700 billion remains in unspent virus aid.

Psaki declined to comment on the forthcoming GOP proposal, but Democrats on Capitol Hill were quick to rebuff dipping into coronavirus relief funds, particularly money that had been sent to the states and local governments that now seems less urgent as some jurisdictions reported better-than-expected balance sheets.

The White House is expecting the Republican counteroffer by Thursday and doesn’t want to prejudge what’s in there. But a GOP plan to tap into rescue funds, aides believe, doesn’t work because much of that money has already been exhausted, and it could also diminish the COVID-19 response.

“My view is that we gave that to the cities and states and counties with the understanding that it may take a little time for them to spend it,” said Sen. Chris Van Hollen, D-Md., a longtime congressional budget expert. “I think it’d be a big mistake to try to claw that back."

As talks hit a stalemate late last week, it's unclear if this latest GOP offer will be enough to put negotiations back on track.

Senate Republican leader Mitch McConnell, who tapped Capito to lead the GOP effort, gave a nod to the latest offer, saying the idea of repurposing the COVID-19 funds was “good advice” from Larry Summers, a Harvard professor and Clinton-era treasury secretary. Summers suggested as much in a recent op-ed as some economists warn of rising inflation with the government spending.

But Republicans and the White House are eyeing each other warily in a high-stakes negotiation with far-reaching political ramifications whether they succeed or fail. "We are now very far apart," said Sen. John Barrasso of Wyoming, a member of GOP leadership.

The Republican senators and aides have made no secret of their displeasure with the White House staff in this and other negotiations.

Publicly and privately, the Republicans say that while Biden appears willing to negotiate with the senators, his staff often changes course. They point to a similar dynamic during coronavirus aid talks when Biden seemed to agree with a group of GOP senators, only to have staff behind him shaking their heads no.

The Republicans are eager to publicly disclose Biden's comments to them as they make the case for their new offer ahead of the Memorial Day deadline.

Among Democrats, it's not lost on them that McConnell has said repeatedly that “100% of my focus” is on stopping Biden’s agenda.

Adding to the mix, a bipartisan group that includes Sen. Mitt Romney, R-Utah, is quietly working on other proposals, as a “backup,” he said.

“This is going to feel like a tightrope walk all the way until it gets to Biden’s desk,” said Jim Kessler, executive vice president of Third Way, a centrist think tank.

The administration is signaling that it’s important not just whether Biden can push his infrastructure and other proposals into law, but also how he does it. By this reasoning, voters — and some moderate Democratic lawmakers — are more likely to be on board if Biden at least tries for bipartisanship.

The West Wing believes its bargaining position is strong. Aides point to Biden’s high poll numbers and the popularity of his proposals, all while believing that they have the option of muscling the infrastructure plan to passage under special budget reconciliation rules that require only a party-line vote.

But there is a growing sense of urgency within the White House and among Democrats. After a burst of legislative accomplishments, including the COVID-19 relief bill, the pace has slowed dramatically. And the future may hinge on a few select senators.

Psaki insisted no decisions had been made on whether the administration will go it alone as it awaits a counteroffer from Republicans. “We’re not quite there yet,” she said.