Margaret Atwood made the comments while introducing 'The Testaments,' set 15 years after the events of her wildly popular novel. 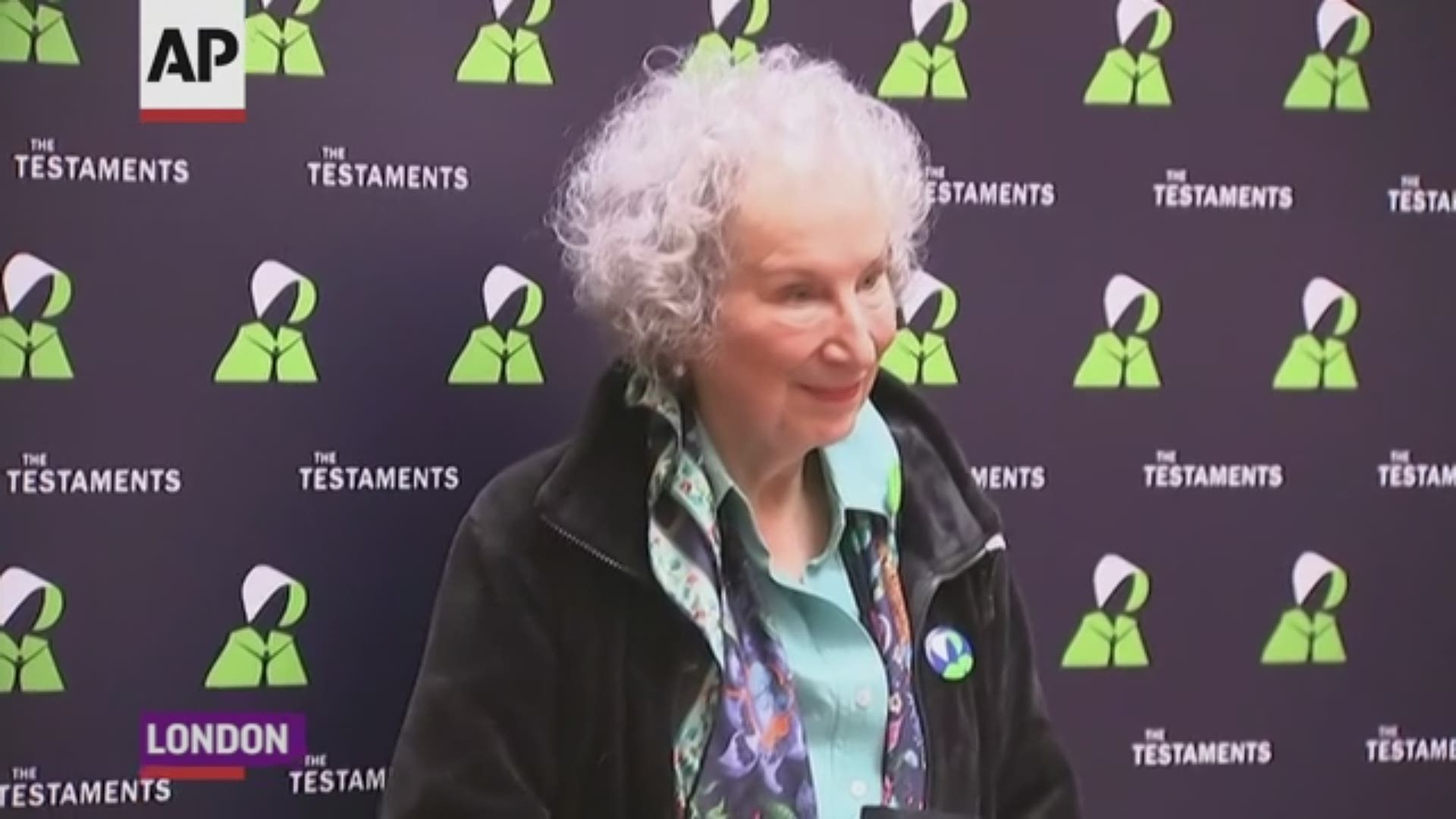 LONDON, UK — Margaret Atwood often gets asked if "The Testaments," her sequel to "The Handmaid's Tale," is set in a dystopian world.

The Canadian author noted as her new novel was published with a ferocious blast of publicity Tuesday that several U.S. states recently enacted laws to limit women's reproductive rights. She likened it to the extreme control over women in Gilead, the theocratic future United States where both "The Handmaid's Tale" and "The Testaments" are set.

"If you look at the legislative moves made by a number of different states within the United States, you can see that some of them are almost there," Atwood said at London's British Library during a publication-day news conference.

RELATED: Praise be! 'Handmaid's Tale' has been renewed for a fourth season at Hulu

When "The Handmaid's Tale" was published in 1985, some readers found the idea of a fundamentalist state supplanting the democratic United States far-fetched. Now, with authoritarianism on the rise around the world, it strikes many as eerily prescient.

"In 1985, people were already saying these kinds of things," Atwood said. "(Politicians) were talking about what they would like to do in the United States if they had the power. And now they do have the power."

Atwood says she long resisted revisiting the world of "The Handmaid's Tale" because she didn't think she could recapture the voice of narrator Offred, a "handmaid" compelled to bear children for a powerful man.

The success of the Emmy Award-winning "Handmaid's Tale" television series starring Elisabeth Moss — and renewed interest in the novel from the TV drama — may have helped change the writer's mind.

"The Testaments" is set about 15 years on from where "The Handmaid's Tale" ends with Offred fleeing to an undetermined future. It has three narrators, including Aunt Lydia, one of Gilead's fearsome enforcers, who features in both book and series of "The Handmaid's Tale."

The author says the follow-up tells the story of "the beginning of the end" of Gilead.

The TV series that first aired in 2017 has helped make Atwood's Gilead a cultural touchstone. Demonstrators at women's rights protests routinely don the red cloaks and bonnets of the show's handmaids.

Intriguingly, the dominant color of "The Testaments," splashed on the book's cover and ad campaign, is bright green.

"There are some new costume choices in the book," Atwood said. "These kinds of regimes are very big on outfits."

"The Testaments" is sure to be one of the year's biggest books, and the months leading up to its publication were surrounded by secrecy - and security.

Atwood says she and the publishers were targeted in cyberattacks aimed at stealing the manuscript. Publisher Penguin's tight pre-publication procedures were slightly compromised when Amazon sent some customers copies early. Amazon apologized for the "technical glitch."

The book was launched with "Harry Potter" levels of hype: midnight festivities in British book stores, a press conference for international journalists and a celebrity-studded evening gala broadcast to 1,300 movie theaters around the world.

The novel is on the shortlist for the prestigious Booker Prize — Atwood's sixth time as a Booker finalist. She has won the prize once (for "The Blind Assassin" in 2000), along with a slew of other awards including Canada's Governor General's Award and the PEN/Pinter free-speech prize.

She's long been considered a favorite for the Nobel Prize for Literature. When British writer Kazuo Ishiguro won in 2017, he said "I apologize to Margaret Atwood that it's not her getting this prize."

Atwood was introduced at a news conference Tuesday as a "literary rock star."

Atwood, who turns 80 in November, said she is "pleased and grateful," but unfazed.

"I think this kind of thing can be quite ruinous for a 35-year-old," she said. "Because where do you go from there? In my case, I think we know the answer."

She has no immediate plans for another installment, but has not ruled out a third trip to Gilead.

"I never say never to anything, because I have said 'never' and been wrong," Atwood said.