Army staff sergeant Travis Atkins died protecting his soldiers from a suspected Iraqi insurgent who was trying to detonate a suicide vest. 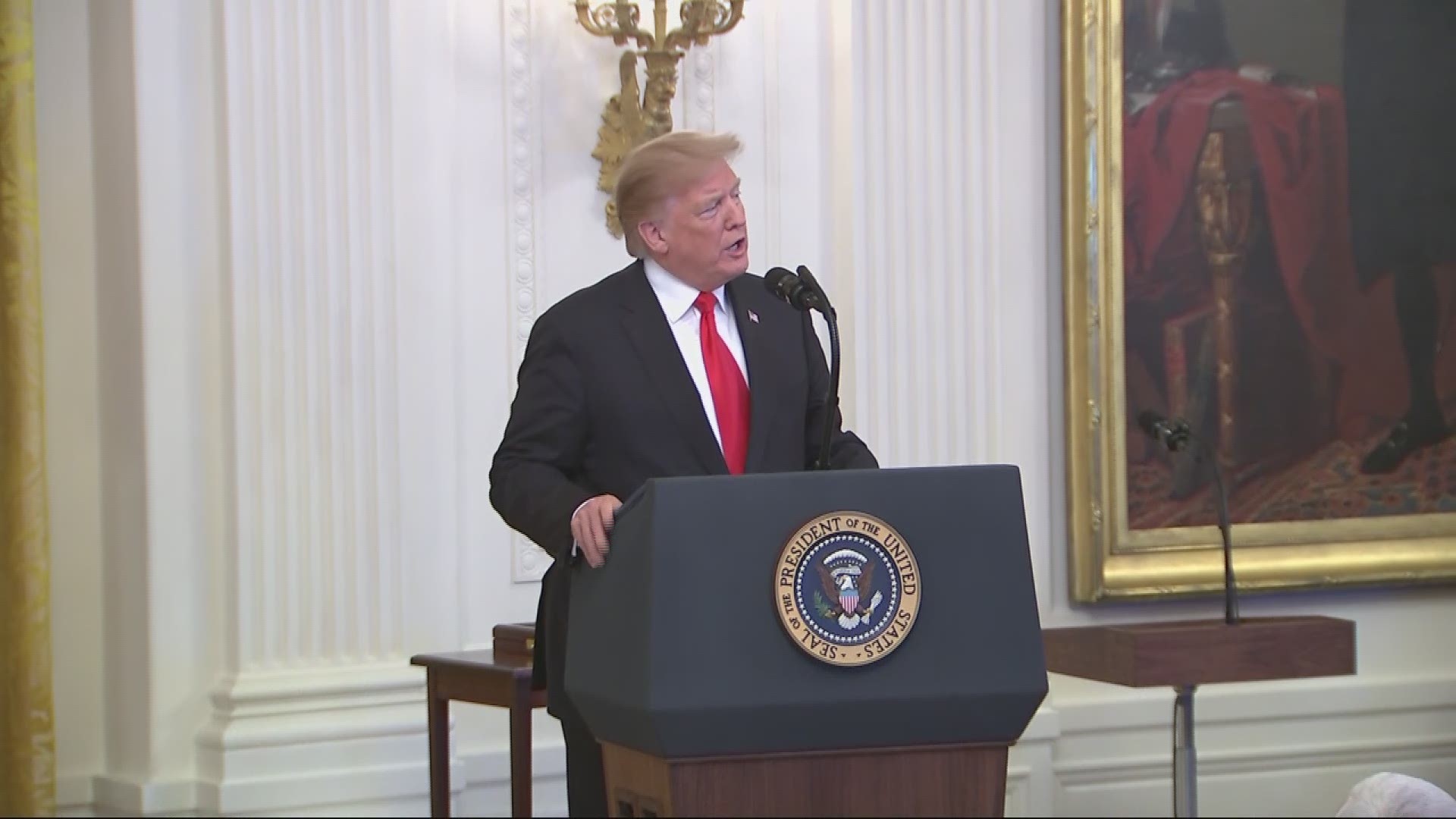 WASHINGTON, D.C., USA — The son of an Army staff sergeant awarded a posthumous Medal of Honor by President Donald Trump on Wednesday said he wants his father to be remembered as the best parent and best soldier anyone could ever ask for.

"You can't get better than the Congressional Medal of Honor. You just can't," Trump explained. The medal is the nation's highest military honor for bravery against an enemy, and Trump had just presented the eighth one of his presidency to Trevor Atkins.

Atkins, 31, of Bozeman, Montana, died in June 2007 while trying to subdue a suspected Iraqi insurgent in a town near Baghdad.

After realizing the man was trying to detonate a suicide vest, Atkins wrapped his body around the man and threw him to the ground, away from three of his soldiers who were nearby. Atkins, who was on his second tour of duty in Iraq and leading a 15-soldier squad after he had become "bored" with civilian life, was killed instantly.

At a somber White House ceremony, Trump said Atkins had called his son days before that fateful June day to wish the boy a happy 11th birthday. Neither knew it would be the last time they'd speak, Trump said, adding that Oliver has always known that his father sacrificed himself for his country.

Invited by Trump to address the audience, which included the three surviving soldiers, Oliver said he takes "a lot of pride" in the Medal of Honor. He described the moment as "surreal" and something he could not put into words.

Atkins had been awarded the Distinguished Service Cross, which was upgraded to a Medal of Honor after a Defense Department review.

Credit: AP
Trevor Oliver accepts the Medal of Honor from President Donald Trump, presented to his father, Army Staff Sgt. Travis Atkins in recognition for conspicuous gallantry in Iraq in June 2007, during a ceremony in the East Room of the White House, Wednesday March 27, 2019, in Washington.

Trump can choose to recognize individuals for a variety of contributions to society, including the arts and science. But the Medal of Honor, which is instigated by the military itself through a nomination and lengthy review process that does not involve the president, is the public award ceremony Trump prefers to host.

The White House said Trump is like most Americans and feels honored any time he hears about or meets someone who is willing to lay down their life for someone else's. The president also feels a sense of pride in having the opportunity to recognize such bravery by awarding the Medal of Honor.

Presidents claim the public spotlight for presenting the medal to service members or on behalf of those who are no longer living, but they have little say in who ultimately is recognized since the White House is not part of the process. Cases work their way up the chain of command at the Pentagon to the service secretary and defense secretary, both of whom have authority to disapprove of a recommendation.

The president, as commander in chief, has the final say after the defense secretary gives his approval.

Some 3,523 people have received the Medal of Honor since President Abraham Lincoln awarded the first one in 1863, during the Civil War, according to the Congressional Medal of Honor Society. There are 72 living recipients.

The first awards Trump presented after taking office went to first responders who were wounded in 2017 when a gunman fired on lawmakers at a baseball practice, critically wounding Rep. Steve Scalise, R-La. Last year, for the first time, Trump recognized seven Americans with the Presidential Medal of Freedom, the nation's highest honor for a civilian.