Families of the missing visit site of Florida condo collapse

Officials say the death toll has reached nine, and late Saturday they identified four of those killed. More than 150 remain unaccounted for. 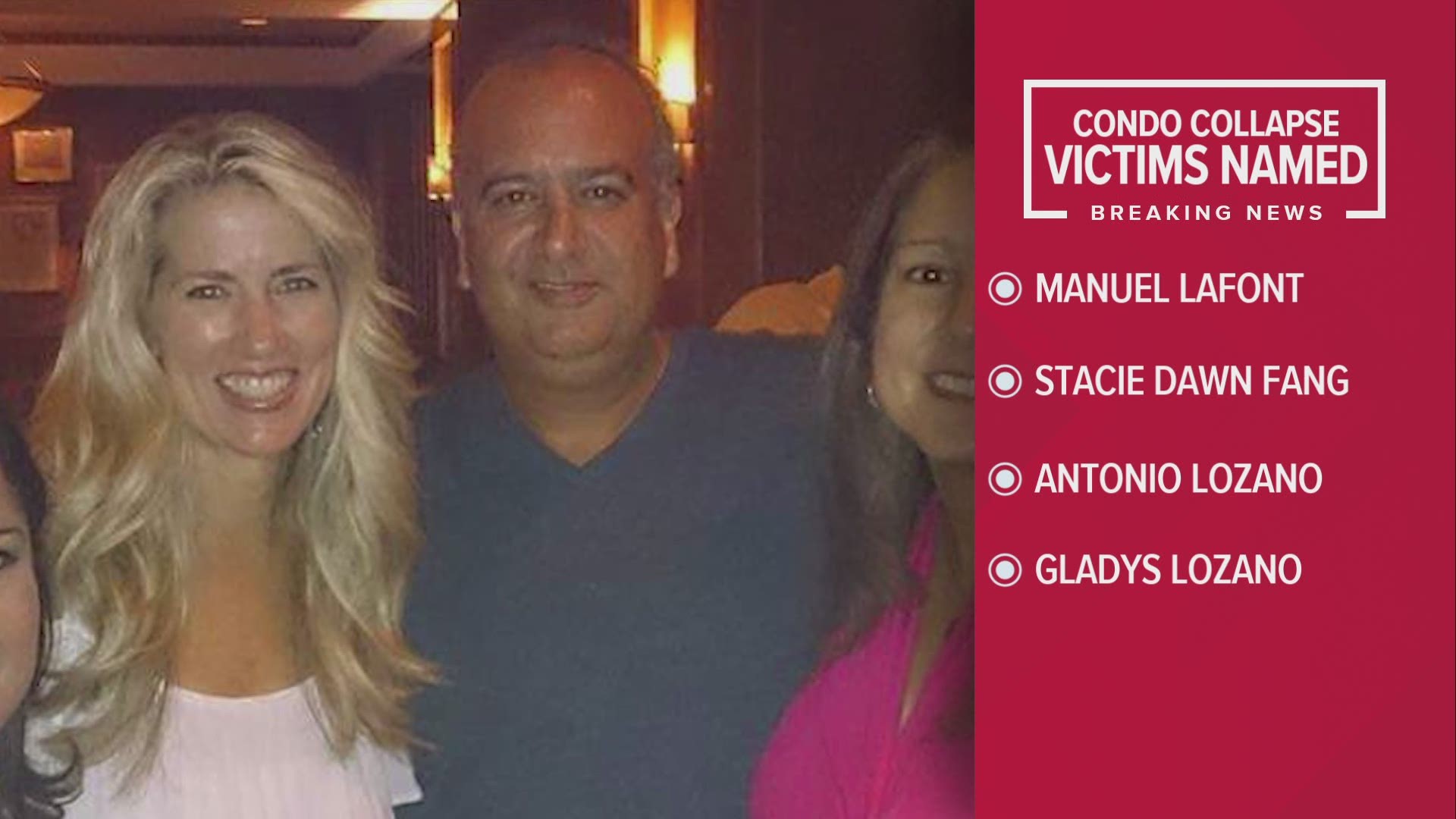 SURFSIDE, Fla. — Families of the missing visited the scene of the Florida condo building collapse Sunday as rescuers kept digging through the mound of rubble and clinging to hope that someone could yet be alive somewhere under the broken concrete and twisted metal.

The death toll rose by just four people, to a total of nine confirmed dead. But after almost four full days of search-and-rescue efforts, more than 150 additional people were still missing in Surfside. No one has been pulled alive from the pile since Thursday, hours after the collapse.

Some families had hoped their visit would allow them to shout messages to loved ones possibly buried deep inside the pile.

Buses brought several groups of relatives to a place where they could view the pile and the rescuers at work. As relatives returned to a nearby hotel, several paused to embrace as they got off the bus. Others walked slowly with arms around each other back to the hotel entrance.

“You can’t imagine. Many of them are desperate” as days drag on with no more survivors found, said Israeli Diaspora Affairs Minister Nachman Shai, who visited briefly with family members of those missing.

Shai led a humanitarian delegation to Surfside that included several Israeli experts in search-and-rescue operations. He said the experts have told him of cases where survivors were found after 100 hours or more.

“So don’t lose hope, that’s what I would say. But you have everyone understanding the longer it takes, the prospects of finding someone alive goes down," he said.

“If you watch the scene, you know it’s almost impossible to find someone alive," Shai added. "But you never know. Sometimes miracles happen, you know? We Jews believe in miracles.”

Rescuers sought to reassure families that they were doing as much as possible to find missing loved ones, but the crews said they needed to work carefully for the best chance of uncovering survivors.

Some relatives have been frustrated with the pace of rescue efforts.

“My daughter is 26 years old, in perfect health. She could make it out of there,” one mother told rescuers during a weekend meeting with family members. A video of the meeting was posted by Instagram user Abigail Pereira.

“It’s not enough,” continued the mother, who was among relatives who pushed authorities to bring in experts from other countries to help. “Imagine if your children were in there.”

Scores of rescue workers remained on the massive heap of rubble Sunday, searching for survivors but so far finding only bodies and human remains.

In a meeting with families Saturday evening, people moaned and wept as Miami-Dade Assistant Fire Chief Raide Jadallah explained why he could not answer their repeated questions about how many victims they had found.

He noted the pancake collapse of the 12-story building, which had crumbled into a rubble pile that could be measured in feet. Those conditions have frustrated crews looking for survivors, he said.

Every time crews find remains, they clean the area and remove the remains. They work with a rabbi to ensure any religious rituals are done properly, Jadallah said.

If crews find any “artifacts,” such as documents, pictures or money, they turn them over to police, officials said.

Alan Cominsky, chief of the Miami-Dade Fire Rescue Department, said they are holding out hope of finding someone alive, but they must be slow and methodical.

“The debris field is scattered throughout, and it’s compact, extremely compact,” he said.

Debris must be stabilized and shored up as they go.

“If there is a void space, we want to make sure we’re given every possibility of a survivor. That’s why we can’t just go in and move things erratically, because that’s going to have the worst outcome possible,” he said.

In meetings with authorities, family members repeatedly pushed rescuers to do more. One asked why they could not surgically remove the largest pieces of cement with cranes, to try to uncover bigger voids where survivors might be found.

“There’s not giant pieces that we can easily surgically remove," replied Maggie Castro, of the fire rescue agency.

“They’re not big pieces. Pieces are crumbled, and they’re being held together by the rebar that’s part of the construction. So if we try to lift that piece, even as carefully, those pieces that are crumbling can fall off the sides and disturb the pile,” Castro said.

She said they try to cut rebar in strategic places and remove large pieces, but that they have to remove them in a way that nothing will fall onto the pile.

“We are doing layer by layer," Castro said. “It doesn’t stop. It’s all day. All night.”

Rescuers were also using a microwave radar device developed by NASA’s Jet Propulsion Lab and the Department of Homeland Security that “sees” through up to 8 inches of solid concrete, according to Adrian Garulay, CEO of Spec Ops Group, which sells them. The suitcase-sized device can detect human respiration and heartbeats and was being deployed Sunday by a seven-member search-and-rescue team from Mexico’s Jewish community.

Miami-Dade Mayor Daniella Levine Cava said six to eight teams are actively searching the pile at any given time, with hundreds of team members on standby ready to rotate in. She said teams have worked around the clock since Thursday, and there was no lack of personnel.

Teams are also working with engineers and sonar to make sure the rescuers are safe.

Crews spent Saturday night digging a trench that stretches 125 feet long, 20 feet across and 40 feet deep, which, she said, allowed them to find more bodies and human remains.

“I understand the families’ concerns on this. If it was my family member, I would want everyone in there pulling rubble away as fast as humanly possible,” Tilton said. “But moving the wrong piece of debris at the wrong time could cause it to fall on them and crush them.”

During past urban rescues, rescuers have found survivors as long as a week past the initial catastrophe, Tilton said.

Associated Press writers Freida Frisaro in Fort Lauderdale, Bobby Caina Calvan in Tallahassee and others from around the United States contributed to this report.