The last-minute decision to re-insert thousands of U.S. troops into Afghanistan calls into question whether President Joe Biden will meet his Aug. 31 deadline. 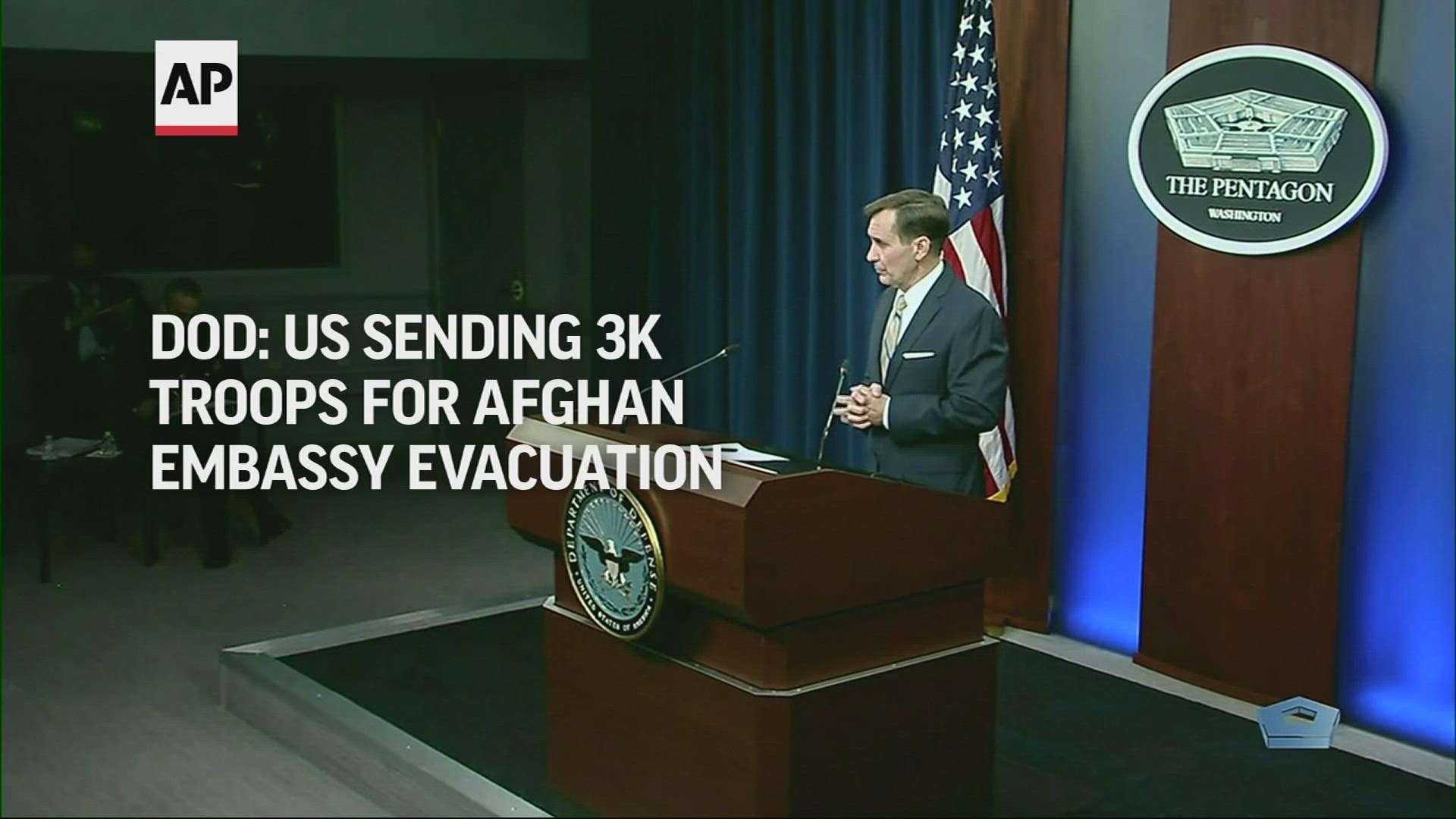 WASHINGTON — President Joe Biden authorized on Saturday an additional 1,000 U.S. troops for deployment to Afghanistan, raising to roughly 5,000 the number of U.S. troops to ensure what Biden called an “orderly and safe drawdown” of American and allied personnel.

U.S. troops will also help in the evacuation of Afghans who worked with the military during the nearly two-decade war.

The last-minute decision to re-insert thousands of U.S. troops into Afghanistan reflected the dire state of security as the Taliban seized control of multiple Afghan cities in a few short days. The need for more forces also called into question whether Biden would meet his Aug. 31 deadline for fully withdrawing combat forces.

In a statement Saturday, Biden didn’t explain the breakdown of the 5,000 troops he said had been deployed. But a defense official said in a media statement that the president had approved Defense Secretary Lloyd Austin’s recommendation that the lead battalion of the 82nd Airborne Brigade Combat Team assist in the State Department’s drawdown.

Over the past several days I have been in close contact with my national security team to give them direction on how to protect our interests and values as we end our military mission in Afghanistan.

Initially 1,000 troops were in place to aid with the withdrawal, and administration officials quickly judged that total to be insufficient. An additional contingent of Marines arrived in Kabul as part of a 3,000-troop force intended to secure an airlift of U.S. Embassy personnel and Afghan allies as Taliban insurgents approached the outskirts of the capital. The additional 1,000 troops approved Saturday appeared to bring the total to 5,000.

After an advance group of Marines arrived on Friday, more flowed into the Kabul international airport on Saturday, said Navy Capt. William Urban, a spokesman for U.S. Central Command. Citing operational security, Urban declined to provide specific numbers. The Pentagon said on Friday that the bulk of the 3,000 — comprising two battalions of Marines and one of Army soldiers — were due by the end of the weekend.

Officials have stressed that the newly arriving troops’ mission is limited to assisting the airlift of embassy personnel and Afghan allies, and they expect to complete it by month’s end. But they might have to stay longer if the embassy is threatened by a Taliban takeover of Kabul by then.

As the situation in Afghanistan rapidly worsened, Biden, who is spending the weekend at Camp David, and Vice President Kamala Harris held a secure video conference on Saturday morning with national security officials. They discussed efforts to reduce the number of U.S. civilians in Afghanistan, evacuate Afghans who worked with the U.S. government and the fast-moving changes on the ground, the White House said.

On Saturday, the Taliban captured Mazar-e-Sharif, a large heavily defended city in northern Afghanistan, and closed in on Kabul by taking the Logar province just to the south. The Taliban have made major advances in recent days, including capturing Herat and Kandahar, the country’s second- and third-largest cities.

“Clearly from their actions, it appears as if they are trying to get Kabul isolated,” Pentagon spokesman John Kirby said, referring to the Taliban’s speedy and efficient takedown of major provincial capitals this past week.

Biden had given the Pentagon until Aug. 31 to complete the withdrawal of the 2,500 to 3,000 troops that were in Afghanistan when he announced in April that he was ending U.S. involvement in the war. That number has dropped to just under 1,000, and all but about 650 are scheduled to be gone by the end of the month; the 650 are to remain to help protect the U.S. diplomatic presence, including with aircraft and defensive weapons at the Kabul airport.

But Thursday’s decision to dispatch 3,000 fresh troops to the airport adds a new twist to the U.S. withdrawal. There is no discussion of rejoining the war, but the number of troops needed for security will depend on decisions about keeping the embassy open and the extent of a Taliban threat to the capital in coming days.

Having the Aug. 31 deadline pass with thousands of U.S. troops in the country would be awkward for Biden given his insistence on ending the 20-year U.S. war by that date. Republicans have already criticized the withdrawal as a mistake and ill-planned, though there’s little political appetite by either party to send fresh troops to fight the Taliban.

Kirby declined on Friday to discuss any assessment of whether the Taliban are likely soon to converge on Kabul, but the urgent movement of extra U.S. troops into Afghanistan to assist the embassy drawdown is clear evidence of Washington’s worry that after the rapid fall of major cities this week with relatively little Afghan government resistance, Kabul is endangered.

Afghan President Ashraf Ghani delivered a televised speech Saturday, his first public appearance since the recent Taliban gains, and pledged not to give up the “achievements” of the 20 years since the U.S. toppled the Taliban after the 9/11 attacks.

The Biden administration has asserted that Afghan security forces have tangible advantages over the insurgents, including a viable air force and superior numbers. The statement serves to highlight the fact that what the Afghan forces lack is motivation to fight in a circumstance where the Taliban seem to have decisive momentum.

Stephen Biddle, a professor of international and public affairs at Columbia University, said in an interview the announcement that 3,000 U.S. troops were heading to Kabul to help pull out American diplomats and embassy staff likely made Afghan morale even worse.

“The message that sent to Afghans is: ‘The city of Kabul is going to fall so fast that we can’t organize an orderly withdrawal from the embassy,’” Biddle said. This suggests to Afghans that the Americans see little future for the government and that “this place could be toast within hours.”

The Pentagon also is moving an additional 4,500 to 5,000 troops to bases in the Gulf countries of Qatar and Kuwait, including 1,000 to Qatar to speed up visa processing for Afghan translators and others who fear retribution from the Taliban for their past work with Americans, and their family members.

The State Department said the embassy in Kabul will remain partially staffed and functioning, but Thursday’s decision to evacuate a significant number of embassy staff and bring in the thousands of additional U.S. troops is a sign of waning confidence in the Afghan government’s ability to hold off the Taliban surge. The Biden administration has not ruled out a full embassy evacuation or possibly relocating embassy operations to the Kabul airport.

There were a little over 4,000 personnel still at the embassy; the State Department has not said how many are being pulled out in the next two weeks.

The Biden administration warned Taliban officials directly that the U.S. would respond if the Taliban attacked Americans during the stepped-up deployments and evacuations.