Hundreds pay their respects to George Floyd in his North Carolina hometown as Washington, D.C. prepares for the city's largest protests yet against police brutality. 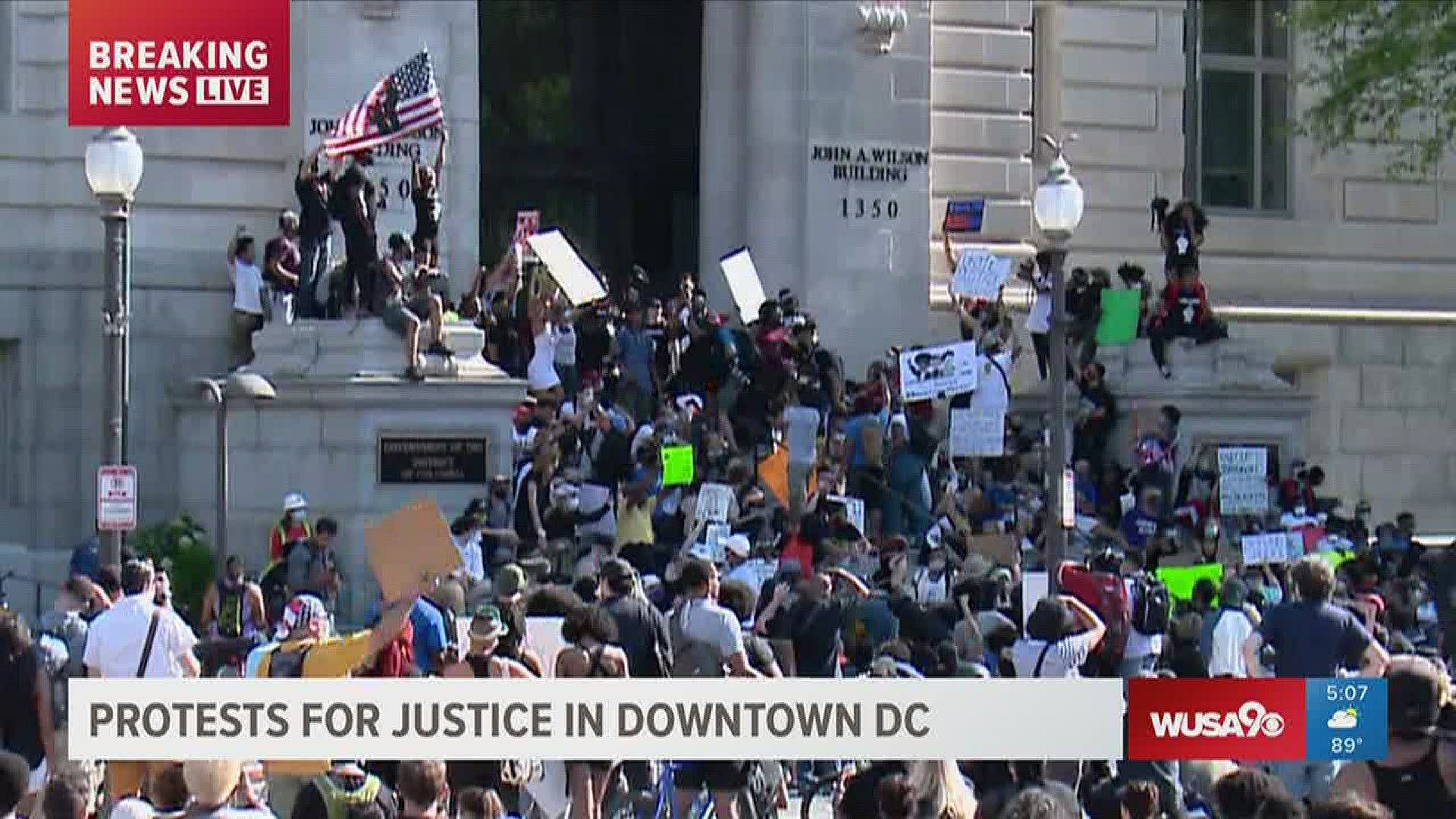 RAEFORD, N.C. — Hundreds of mourners lined up Saturday to pay respects to George Floyd in his North Carolina hometown, and the nation's capital prepared for what was expected to be the city's largest demonstration yet against police brutality.

Hundreds of mourners lined up to squeeze into a church to pay their respects to Floyd.

Military vehicles and officers in fatigues closed off much of downtown Washington to traffic ahead of the planned march, which authorities estimated would attract up to 200,000 people outraged by Floyd’s death 12 days ago at the hands of police in Minneapolis.

Large protests also took place across the U.S. and in major cities overseas, including London, Paris, Berlin and Sydney, Australia.

In Raeford, the small town near Fayetteville where Floyd was born 46 years ago, a long line of people formed outside a church, waiting to enter in small groups for a chance to look at his coffin. A private memorial service was scheduled for later in the day.

The line of people waiting to view the coffin included families with young children and teenagers. One young woman wore a green and gold graduation cap and gown as she walked beside her parents. Most people wore surgical masks or cloth face coverings.

When a hearse bearing Floyd’s coffin arrived, chants of “Black Power,” “George Floyd” and “No justice, no peace,” echoed from beneath the covered entrance.

“It could have been me. It could have been my brother, my father, any of my friends who are black,” said a man in the crowd, Erik Carlos of Fayetteville. “It was a heavy hit, especially knowing that George Floyd was born near my hometown. It made me feel very vulnerable at first.”

Washington has seen daily protests for the past week — largely peaceful, with people marching back and forth from the White House to the Capitol and the Lincoln Memorial. Army Secretary Ryan McCarthy said local officials expected 100,000 to 200,000 protesters for Saturday’s event. The White House has been fortified with new fencing and extra security precautions.

President Donald Trump had no public events on his daily schedule. But about 100 protesters gathered at his golf resort in Doral, Florida, just outside Miami. The protest was organized by Latinos for Black Lives Matter.

In general, demonstrations in the U.S. have shifted to a calmer tenor in recent days after frequent episodes of violence in the early stages. Protesters and their supporters in public office say they are determined to turn the extraordinary outpouring of anger and grief into change, notably in regard to policing policies.

College student Maiya Mack, 19, who protested in Columbus, Ohio, said a key step would be effective discipline against police officers implicated in racist acts of violence.

“Police who have performed misconduct, they should be held accountable, not just you can still be at home, you can still get paid,” she said.

Theresa Bland, 68, a retired teacher and realtor protesting at the Ohio Statehouse, had a broader agenda in mind

There already have been some tangible steps.

In Minneapolis, city officials have agreed to ban chokeholds and neck restraints by police and to require officers to try to stop any other officers they see using improper force. In California, Gov. Gavin Newsom ordered the state’s police training program to stop teaching officers how to use a neck hold that blocks the flow of blood to the brain.

Democrats in Congress are preparing a sweeping package of police reforms, which are expected to included changes to police-accountability laws, such as revising immunity provisions and creating a database of police use-of-force incidents. Revamped training requirements are planned, too, among them a ban on chokeholds.

RELATED: Rallies and marches planned throughout the weekend to protest police brutality and call for social justice

The House is expected to vote by month’s end. With Democrats in the majority, the bills will almost certainly pass the House. The outcome in the Senate is less certain. Republican Majority Leader Mitch McConnell has said the chamber would look at the issues, but he has not endorsed any particular legislation.

Meanwhile in New York, two Buffalo police officers were charged with assault Saturday after a video showed them shoving a 75-year-old protester, who fell backwards onto the pavement and was hospitalized. Both pleaded not guilty to second-degree assault and were released without bail. The two were suspended without pay Friday after a TV crew captured the confrontation.

In London, thousands of demonstrators endured cold rain to gather in Parliament Square, a traditional venue for protests. They knelt in silence and chanted Floyd’s name before applauding his memory and then starting a march.

Credit: AP
People pay their respects during a memorial service for George Floyd, Saturday, June 6, 2020, in Raeford, N.C. Floyd died after being restrained by Minneapolis police officers on May 25. (Ed Clemente/The Fayetteville Observer via AP, Pool)

In Paris, hundreds of people gathered at the Place de la Concorde in defiance of a police ban on large protests. Members of the multiracial crowd chanted the name of Adama Traore, a black man whose death while in police custody a few years ago has been likened by critics of French police to Floyd’s death in Minnesota.

Chris Trabot, who works for Paris City Hall and is black, said Floyd’s death triggered his decision to demonstrate for the first time in his life.

Trabot said, “The violence happens every day. The moment has come to say stop.”

Crary reported from New York and Leicester from Paris. Associated Press reporters from around the world around the U.S. contributed.