Sasha Martin believes the ashes are a cremated person and she's making it a mission to find their owner. 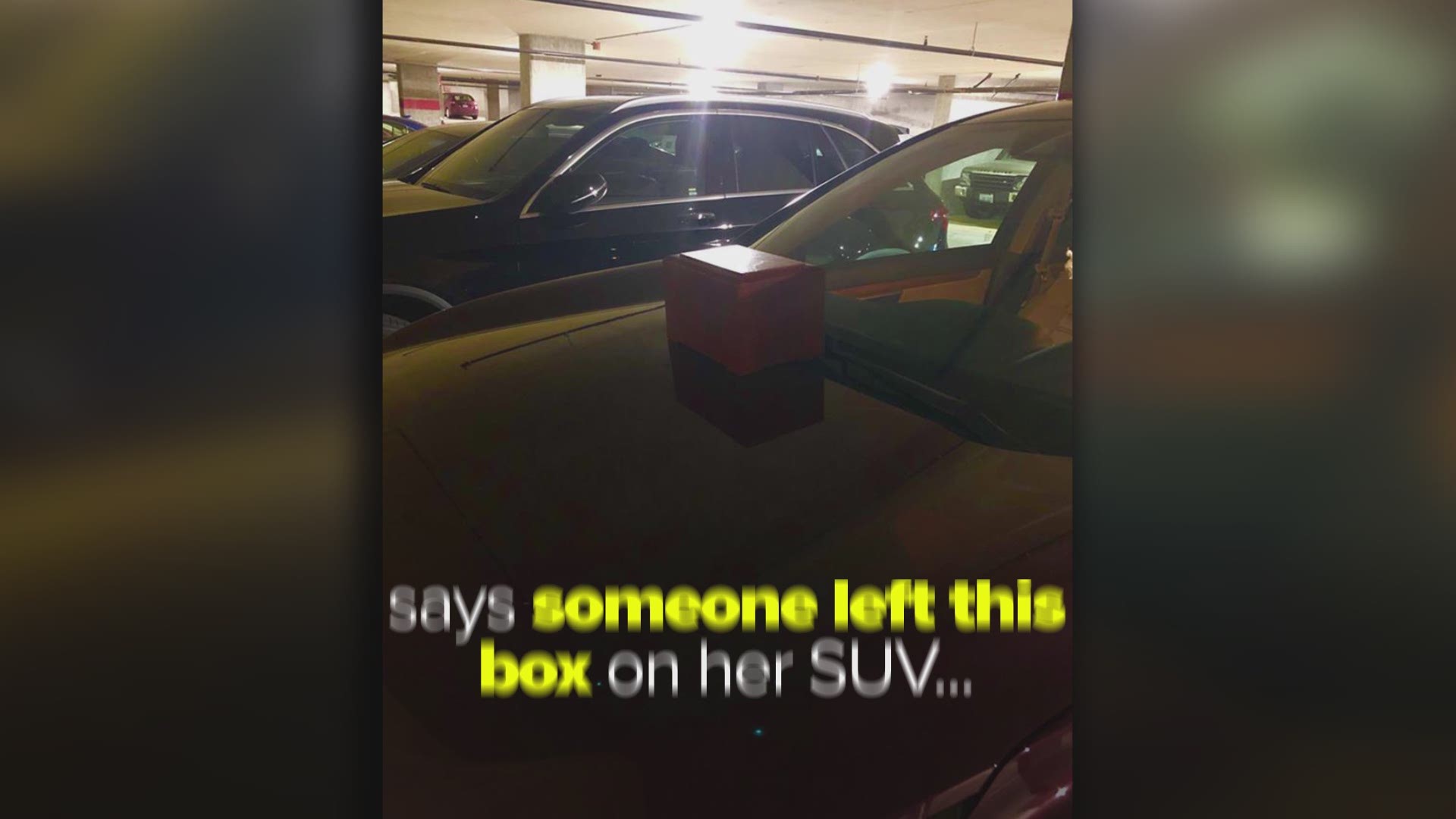 UPDATE: Martin took the box to a funeral director who as was able to confirm the remains are human and that the cremation was done a decade or two ago. However, there were no identification chips or anything else in the bag to help determine who this is. Martin says the funeral home director is going to reach out to her network of colleagues to see if they can find the cremation center that did the procedure.

One is somewhat trivial: how to move all her belongings from her small apartment into a smaller apartment.

The other is more serious: the wooden box that someone left on her SUV last weekend that contains a bag of whitish-gray powder. She believes it's human ashes.

"I now know more about cremation than I ever wanted to know," Martin said about her Holmesian efforts.

Martin doesn't know who it is. She doesn't know how the box ended up carefully placed on her SUV hood. Her mission to find its owner has gone for naught, but she's not letting the box go until she finds them.

Martin, who lives in the Seattle suburb of Bellevue, was on her way to a running group around 6:30 a.m. Saturday. As she went to her SUV in the gated parking garage of her downtown apartment building, she noticed the box sitting on the hood.

Credit: Sasha Martin
A photo of a wooden box left on the hood of Sasha Martin's SUV in Bellevue, Wash., April 13, 2019. Martin determined a bag of ashes -- possibly cremated human remains -- were inside.

"It took me a few seconds to collect my thoughts, like, 'Could this be a bomb? Could this be something that spills on me?'" Martin said.

She noted that someone placed it there carefully. There were no scratches or signs of damage to her SUV. The box was placed on the center of the hood and up against the windshield.

"I thought about potential possibilities where maybe the car next to me, somebody was getting out of their car and had too many things in their hands and needed to set something down," Martin said.

She also thought someone might have put it on the wrong vehicle by mistake.

Martin put the box -- which she said was heavy and had no lid or drawers -- on the ground before she went to her running group. When she returned, the box was still there.

"I took more pictures of it from a few more angles, left it there, went up to my apartment and posted it on Facebook," Martin said.

That's when a friend shocked Martin by telling her this was likely a box used to hold an urn, possibly for pet ashes.

As the owner of a scrappy little dog named Buddy, Martin knew that someone would want their beloved pet back. She would hold onto the box for safe-keeping.

Credit: Sasha Martin
A photo of the box Sasha Martin found on her SUV, and her dog, Buddy. At first, Martin thought the box held pet ashes. Now, she thinks they are human.

Martin asked her building managers to send a shout-out to other residents. She posted photos to multiple community Facebook groups and to nextdoor.com to see if the owner would spot it.

She also continued running theories through her head as she was researching the box. Did burglars steal this thinking it was something else?

"This box very much looks like a jewelry box, so maybe they just grabbed it and ran," Martin said. If that was the case, Martin said perhaps the crooks had a moment of conscience when they realized what it was and decided to place it somewhere safe.

Martin called the Bellevue Police Department about her find. She said an officer told her that, if it was pet ashes, this would be considered a lost-and-found situation and not something police would be investigating.

The next day, someone asked what made her think it wasn't human ashes.

"Didn't even think of that," she said.

That's when she did more research and discovered the size of the box meant it was likely too big for a pet. She discovered that 1 pound of body weight would be equal to 1 cubic inch needed to hold it.

This box, which Martin still had not opened 36 hours later, was 420 cubic inches, by her measurement. That would be equal to 420 pounds of cremated remains -- too big to be a pet.

"It would be either a larger adult or it could be two people," Martin said. "Apparently, a double urn is quite common and a lot of times people will hold on to one and, when the second person passes, they combine them and spread them together."

Once again, Martin reached out to Bellevue police. Once again, she was told this was a "lost and found" situation even if it was human ashes. She said they told her that if it looked like a crime, it would be a different story. But since someone had this person cremated and their ashes were placed in a box built specifically for that, there was no reason to think the person's death was nefarious.

Martin needed to open the box to be sure.

"It just felt like the intensity of the situation was much greater now," Martin said. She thought about a grieving family somewhere that may have planned to spread these ashes.

Monday night, she took the box to her balcony as a precaution and removed the four screws on the bottom to open it.

Credit: Sasha Martin
The box Sasha Martin found on the hood of her SUV. The four screws on the bottom are the only way to open it -- a common feature on boxes meant to hold cremated remains.

She didn't find an urn, but she did find a cinched-up plastic bag with ashes inside.

"A friend of mine told me that sometimes when they cremate, not all the bones are entirely powdered and so I looked for signs of pieces and some of it was bigger pieces," Martin said.

What she didn't find was what she was really looking for: No name. No phone number. No address. No packing slip. There wasn't even the name of the box manufacturer or a serial number to track.

She lifted the bag out and there was nothing on it, either.

Now, what to do? The front desk of her apartment building offered to put it in their own "lost and found." She declined, believing this box and its precious contents needed to be treated with more respect.

"I'm not even religious or anything but it just feels like, if it was my relative, I wouldn't want it to be treated like an item," Martin said. "I absolutely will not surrender it to anyone who is not clearly committed to finding the owners."

So, her detective work will continue, as will her moving plans.

"I'm moving in a month and this thing is moving with me," Martin said. "I'm not leaving it behind."

A Bellevue Police Department spokesman confirmed this would be considered a case of found property.

"If there were no distinguishing marks on the box or other information indicating there were in fact remains inside the box, the only action we would have taken would have been to book the item into evidence as safekeeping or possibly post something to social media asking for the owner to contact us," Officer Seth Tyler said in an email.