A leg of the relay on Okinawa's resort island of Miyakojima has been canceled with cases surging in Japan. 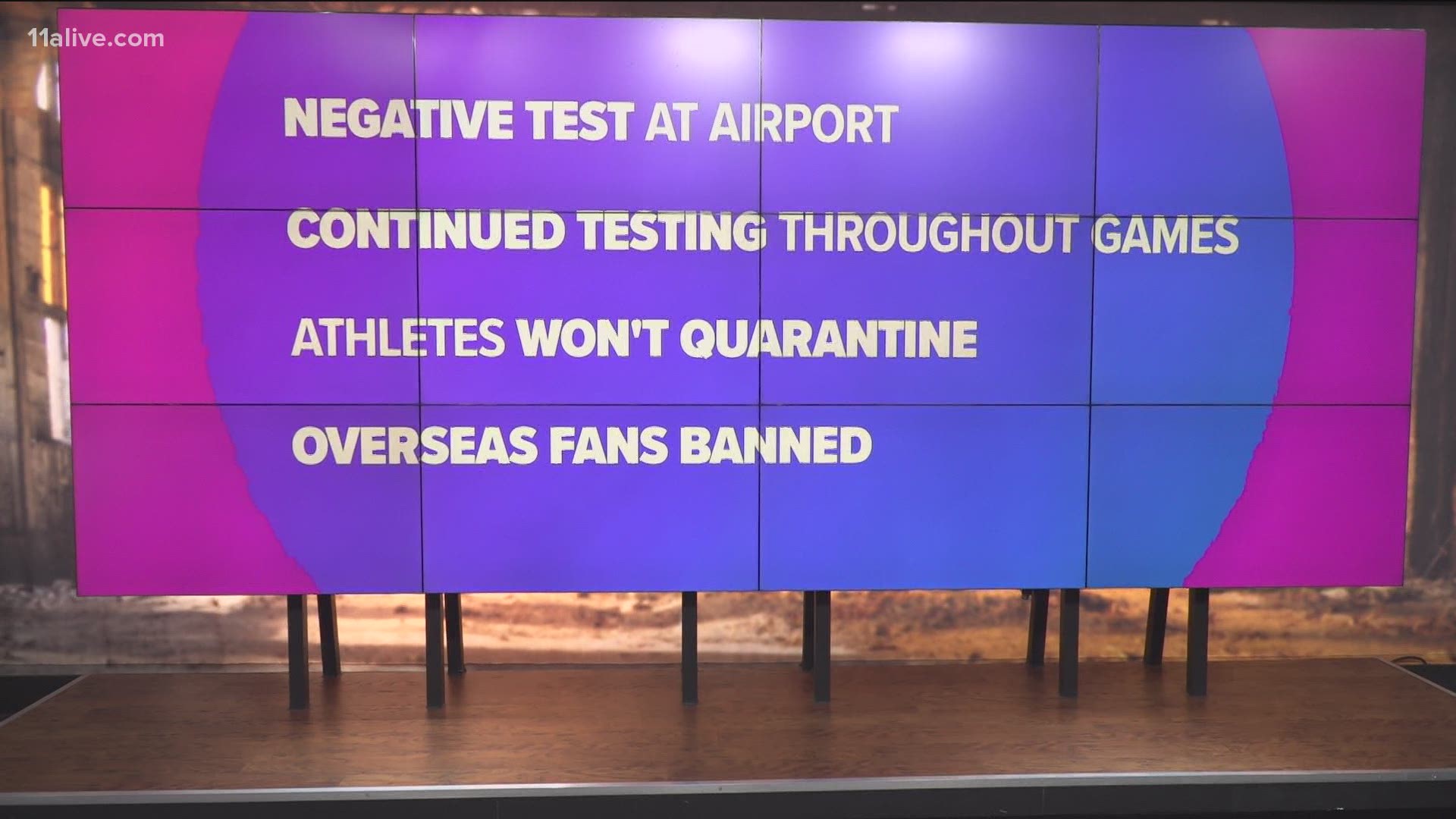 The Tokyo Olympics torch relay will take another detour this weekend when it enters the southern island of Okinawa.

A leg of the relay on Okinawa's resort island of Miyakojima set for Sunday has been canceled altogether with cases surging in Japan. Other legs on Okinawa will take place.

A 17-day state of emergency went into effect on April 25 in some areas in Japan, which has shut down department stores and bars in Tokyo and the country's second largest metropolis of Osaka.

"We don't want people from outside the island coming in. Human life is at stake," Hayako Shimizu, a teacher in Miyakojima, told the Associated Press.

The relay, which will involve 10,000 runners from every corner of Japan, started six weeks ago and has been mostly on schedule despite major rerouting in Osaka and in Matsuyama City in nearby Ehime prefecture.

The relay is made up of a convoy of about a dozen vehicles with sponsors names festooned on them: Coca-Cola, Toyota Motor Corp. and Nippon Life Insurance Co. The torch bearer follows, each running for a couple of minutes, before giving the flame to the next runner who awaits holding another torch.

The torch relay — like planning for the postponed Olympics that are to open on July 23 — is filled with uncertainty, constant changes, and questions about why it is taking place, and how it will take place.

A six-day, on-and-off diving event opened Saturday in Tokyo with 225 athletes from from 46 countries — but no fans.

It was not immediately clear where the athletes were staying or under what quarantine conditions, if any, they entered Japan. It's also not clear how many staff members accompanied the divers.

Contacted by AP, Tokyo organizers said it "understands that the athletes are entering Japan based on the guidelines provided by JASF (Japanese swimming federation) and approved by FINA."

It referred further enquires to FINA and local swim officials.

The Japanese news agency Kyodo, citing the Japanese Swimming Federation, said a coach of the Egyptian diving team tested positive for COVID-19 upon arrival in Japan. It said the rest of the team tested negative.

The world governing body of swimming FINA listed one of divers in Tokyo as former Olympic bronze medalist Tom Daley of Britain. But other divers were from various countries including Mexico, Germany, Canada, Romania, Colombia, Japan, Malaysia, Ukraine, and Russia.

The diving event is one of several tests this month — all without fans. Organizers say they will be decide in June how many fans — if any — will be allowed for the Olympics. Fans from abroad have already been banned.

In a briefing on Friday, Hidemasa Nakamura, the games delivery officer, pushed back against repeated reports that the venues will be empty.

"Of course we are looking at the possibility of letting spectators in," he said.

Nakamura also said the focus was on "how safely we can have the games" and not on whether they should take place in the middle of a pandemic.

Others are not so sure about allowing 15,000 Olympic and Paralympic athletes into Japan.

One is Canadian Hayley Wickenheiser, a four-time Olympic gold medalist in ice hockey who just completed medical school. Wickenheiser is also a member of the IOC Athletes' Commission, and was one of the first a year ago to say the Olympics should be postponed.

"I would love to see the games happen, it would be a great message of hope for the world. But I think we always have to remember what we're in the middle of right now," Wickenheiser said in an interview with the Canadian Broadcasting Corporation.

Wickenheiser hinted she was probably a "black sheep" in Olympic circles but added: "I don't really care."

"I think the IOC wants to go ahead with the games no matter what," Wickenheiser said. "Part of me wants to trust that that plan is a good one. But part of me has also seen what's happened since the start of the pandemic and I question some of the motives. There's money, there's power, there's politics. . . . and a lot of ego involved."

Dr. Shigeru Omi, who heads the Japanese government panel on the coronavirus response, warned a parliamentary committee on Wednesday that the virus is spreading and putting hospitals under stress.

Olympic organizers say they will need about 10,000 medical professionals during the Olympics, and recently officials requested an additional 500 nurses. Nursing groups immediately protested, saying they were used as pawns.

"The infections are definitely spreading, including in developing countries, and so it is important to thoroughly understand this situation and know there are definitely risks," Omi said.

"It is time the (Olympic) organizers and others involved to be responsible and seriously start thinking about how infections are spreading, and the medical system is getting stretched thin, and then to inform the public."