New York City's mayor said officials were scrutinizing video of a 'very erratic' flight before the helicopter crashed into a skyscraper. 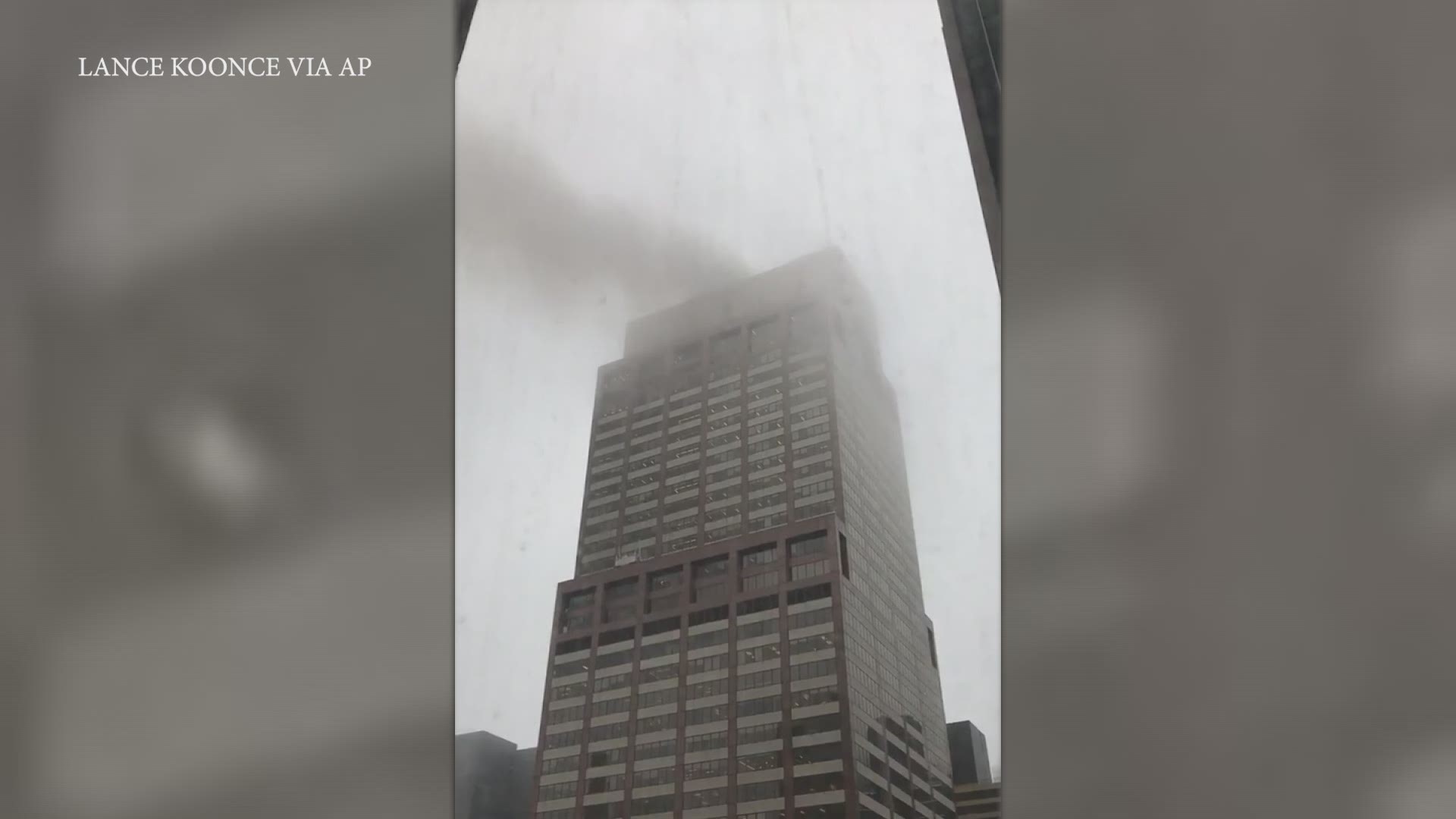 A helicopter crashed on the roof of a rain-shrouded midtown Manhattan skyscraper Monday, killing the pilot and briefly triggering memories of 9/11, after an erratic trip across some of the nation's most restricted airspace. Authorities said they did not suspect terrorism.

The crash near Times Square and Trump Tower shook the 750-foot AXA Equitable building, sparked a fire and forced office workers to flee on elevators and down stairs, witnesses and officials said.

The pilot was the only person aboard, and there were no other reports of injuries, authorities said.

It was not immediately clear what caused the crash, or why the Agusta A109E was flying in a driving downpour with low cloud cover and in the tightly controlled airspace of midtown Manhattan. A flight restriction in effect since President Donald Trump took office bans aircraft from flying below 3,000 feet (914 meters) within a 1-mile (1.6-kilometer) radius of Trump Tower, which is less than a half-mile (0.8 kilometers) from the crash site.

"There's something mysterious here," Mayor Bill de Blasio told CNN, saying officials were scrutinizing video of a "very erratic" flight and authorities needed to find out more about the pilot at the time he decided to take off.

One lawmaker called for "non-essential" helicopter flights over Manhattan to be banned.

The pilot, identified by his employer as Tim McCormack, was a former fire chief in upstate Clinton, New York. With 15 years of experience flying helicopters and single-engine airplanes, he was certified as a flight instructor last year, according to Federal Aviation Administration records.

The East Clinton Volunteer Fire Department posted on Facebook that McCormack's "technical knowledge and ability to command an emergency were exceptional."

The 19-year-old helicopter was linked to a real estate company founded by Italian-born investor Daniele Bodini, according to FAA records.

The helicopter went down about 11 minutes after taking off from a heliport along the East River, a little more than a mile (1.6 kilometers) away. Police Commissioner James O'Neill said it may have been returning to its home airport in Linden, New Jersey.

The director at Linden Municipal Airport, Paul Dudley, described McCormack as "a highly seasoned" and "very well regarded" pilot who was a regular at the airfield.

He suspects that a mechanical problem or the weather "overwhelmed him and the helicopter," Dudley said. "I believe he tried to get on the roof and spare the people on the ground."

McCormack, 58, chronicled some of his helicopter flights on his Facebook page, including a 2014 emergency landing caused by a bird strike. He had been conducting a sightseeing tour over Manhattan when the bird penetrated the windshield of his Bell BHT 407, causing McCormack to land unexpectedly at the West 30th Street Heliport.

"It was pretty much like an explosion going off in your cockpit," McCormack told television station WABC at the time. 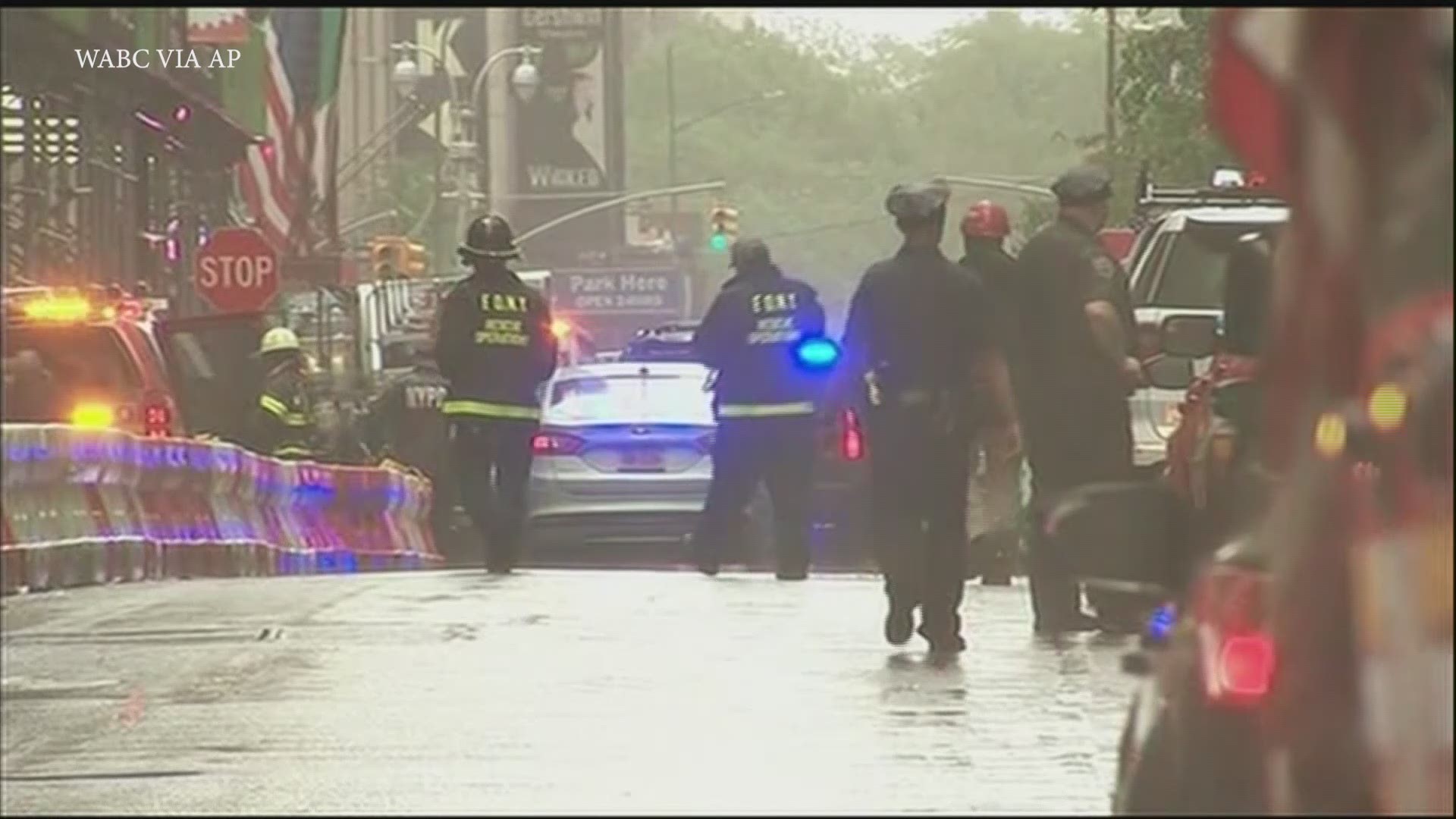 The crash happened shortly before 2 p.m. Monday, when clouds obscured the roof of the building. Rescue vehicles swarmed to the scene a few blocks from Rockefeller Center.

Pedro Rodriguez, a pastry line cook at Le Bernardin, a well-known restaurant in the AXA Equitable building, said workers got an announcement telling everyone to exit, and he later heard from people around him that there was a fire on the roof.

The evacuation was not chaotic, Rodriguez said, but he was rattled because he immediately thought of the Sept. 11 attacks.

"It's scary when something like this happens," he said.

Videos posted by onlookers showed emergency vehicles in the street, but no obvious damage to the skyscraper. The fire department later tweeted a photo of the helicopter's wreckage that showed piles of burned debris on the roof.

"If you're a New Yorker, you have a level of PTSD, right, from 9/11. And I remember that morning all too well. So as soon as you hear an aircraft hit a building, I think my mind goes where every New Yorker's mind goes," Gov. Andrew Cuomo told reporters.

Working for a bank on the building's seventh floor, Kendall Sawyer felt a shake — "jarring enough to notice," but workers weren't sure what it was, she said.

Then came an announcement that the situation was being looked into, and a few minutes later, an instruction to evacuate, without explanation, she said.

A block south, lawyer Lance Koonce heard a loud sound he thought could be a low-flying helicopter. From his 21st-story window, he looked up and saw smoke.

Trump tweeted from Washington that he had been briefed on the crash. Cuomo's office said the president and governor had spoken.

The National Transportation Safety Board was sending an investigator.

In Washington, Rep. Carolyn Maloney, a Manhattan Democrat, called on the Federal Aviation Administration to ban "non-essential" helicopter flights over Manhattan, as she did after a previous crash.

"Why should some tour guide be able to endanger the lives of people by flying over probably one of the most densely populated areas in the world?" she asked. "It doesn't make any sense at all, and it should have been banned long ago."

The city currently allows helicopters to take off and land from three heliports, one each on the East and West sides and in downtown Manhattan. All of the facilities border rivers.

It was once more common for helicopters to take off from private Manhattan rooftops, the most famous of which was on the tower then known as the Pan Am building. In 1977, four people waiting on the roof were killed when a helicopter toppled over and a rotor blade broke off and hit them. A fifth person, a pedestrian, was killed by falling debris.

That spurred a push to close down private helipads.

Still, the city has seen a string of helicopter accidents since. The most recent was just last month, when a chopper crash landed in the Hudson River near a busy Manhattan heliport. The pilot escaped mostly unscathed.

In 2006, New York Yankees pitcher Corey Lidle's single-engine plane slammed into the 20th floor of a building on Manhattan's Upper East Side, killing Lidle and his flight instructor. It was not clear which one was piloting the plane.

The National Transportation Safety Board concluded the pilot misjudged a narrow U-turn before veering into the building.