The president offered few details about the yet-to-be-formalized order during a discussion on race relations and policing. 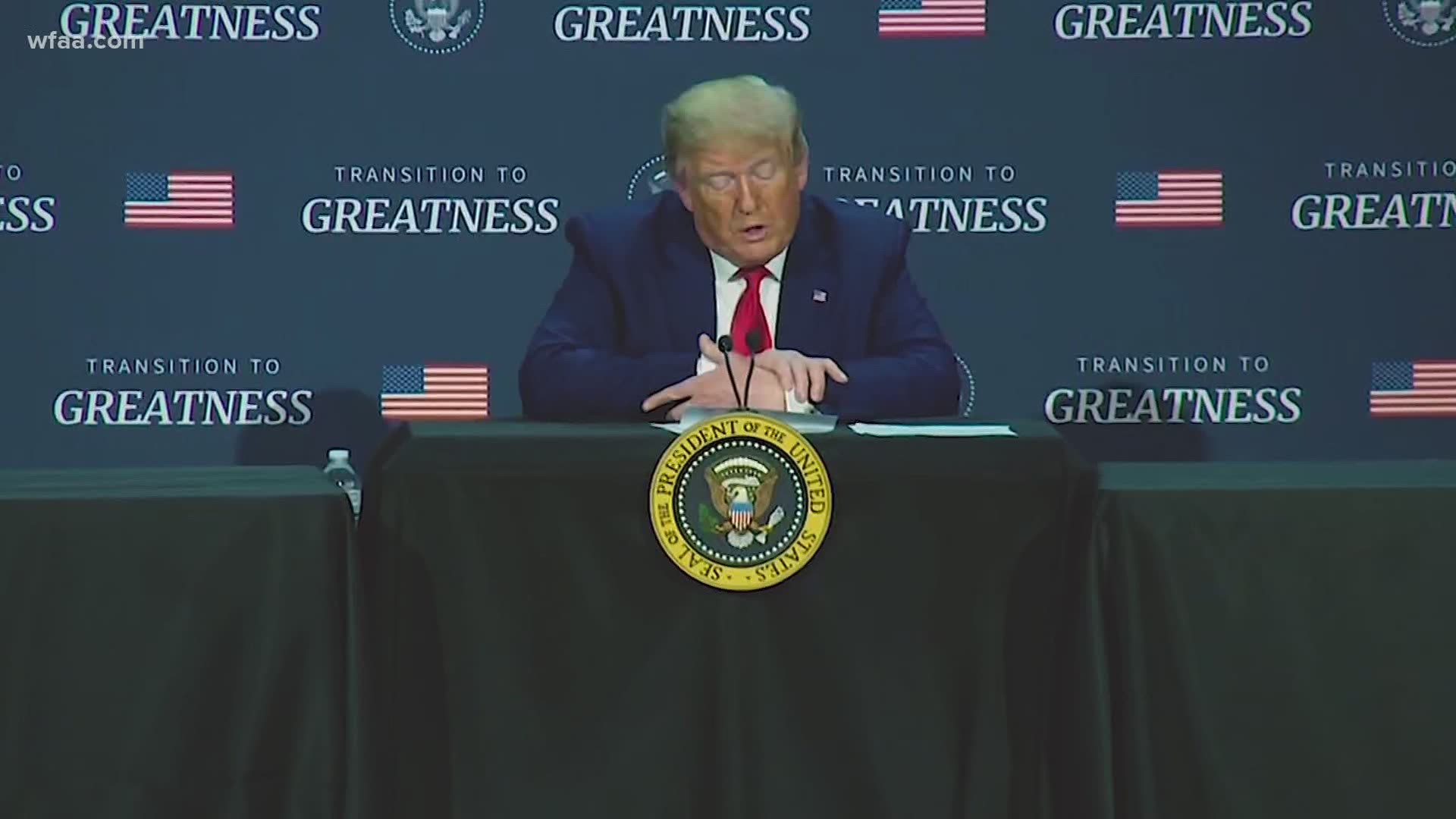 DALLAS — President Donald Trump said Thursday he would pursue an executive order to encourage police departments to meet “current professional standards for the use of force," while accusing Democrats of broadly branding police as the problem.

He also defended his calls on governors and mayors to aggressively quell violent protests that erupted across the country after the death of George Floyd, boasting, “We’re dominating the street with compassion."

Trump offered few details about the yet-to-be-formalized order during a discussion on race relations and policing before a friendly audience in Dallas. The call for establishing a national use-of-force standard amounted to his first concrete proposal for police reform in response to the national outcry following Floyd's death in a violent encounter with Minneapolis police.

The president also acknowledged that law enforcement may have some “bad apples," but he said it is unfair to broadly paint police officers as bigots.

“We have to work together to confront bigotry and prejudice wherever they appear," Trump said. “But we’ll make no progress and heal no wounds by falsely labeling tens of millions of decent Americans as racists or bigots."

The president said the nation also needs to bolster its efforts to confront its long-simmering racial relations problems by focusing on inequality, redoubling on his contention that solving economic issues is the fastest way to healing racial wounds.

Dallas Police Chief U. Renee Hall, Dallas County Sheriff Marian Brown and Dallas County District Attorney John Creuzot did not receive invitations to the event, according to their offices. Mayor Eric Johnson was invited but did not attend because of prior commitments, according to an aide.

A senior administration official who briefed reporters ahead of Trump's trip noted other law enforcement officials were in attendance but did not directly respond to a question about why the three officials weren't invited.

Trump filled the roundtable with police union officials and allies from the African American community, including a member of Black Voices for Trump — many who spoke glowingly about the president.

Democrats on Capitol Hill have unveiled sweeping police reform legislation, including provisions to ban choke holds and limit legal protections for police. Congressional Republicans say they are also open to some reforms, including a national registry of use-of-force incidents so police officers cannot transfer between departments without public awareness of their records.

RELATED: A look at Democrats' sweeping proposals to overhaul policing

White House chief of staff Mark Meadows and senior adviser Jared Kushner have been discussing possible packages with GOP lawmakers, but it’s unclear what the president himself would be willing to accept.

Trump, for his part, lashed at some in the Democratic party who have called for “defunding the police,” a broad call to reframe thinking about how communities should approach public safety.

“”Unfortunately there’s some trying to stoke division and to push an extreme agenda, which we won’t go for, that will produce only more poverty, more crime, more suffering,” Trump said.

Activists say it isn’t about eliminating police departments or stripping agencies of all their money. They say it is time for the country to address systemic problems in policing in America and spend more on other things communities across the U.S. need, like housing and education.

Trump has previously publicly expressed sympathy for Floyd's family of Floyd, but did not mention them during the roundtable discussion, held two days after Floyd was buried in Houston. He previously suggested that Minneapolis Officer Derek Chauvin, who prosecutors say pressed his knee on Floyd’s neck for several minutes, must have “snapped.” U.S. Surgeon General Jerome Adams, who took part in the panel, started his remarks by extending condolences to the Floyds and Texans.

Attorney General William Barr, who accompanied Trump to the event, backed up the president’s emphasis on law and order. Barr said what happened to Floyd shouldn’t obscure the fact that police offers are decent people “who put their lives on the line for us.”

“We can’t let this event obscure the fact that the real oppression and danger to our communities comes more from violent crime and lawlessness than it does from the police,” Barr said.

Former Vice President Joe Biden, the presumptive Democratic presidential nominee, dismissed Trump’s Dallas visit in advance as a “photo op” and charged that the president has “run away from a meaningful conversation on systemic racism and police brutality.”

Trump, whose campaign effort has been largely sidelined by the coronavirus, also held a high-dollar fundraiser during his visit to Dallas. The intimate event for about 25 supporters was expected to raise $10 million to be split between his campaign, the Republican National Committee and 22 state parties, according to a GOP official.

RELATED: Trump rally on Juneteenth in Tulsa called 'slap in the face'