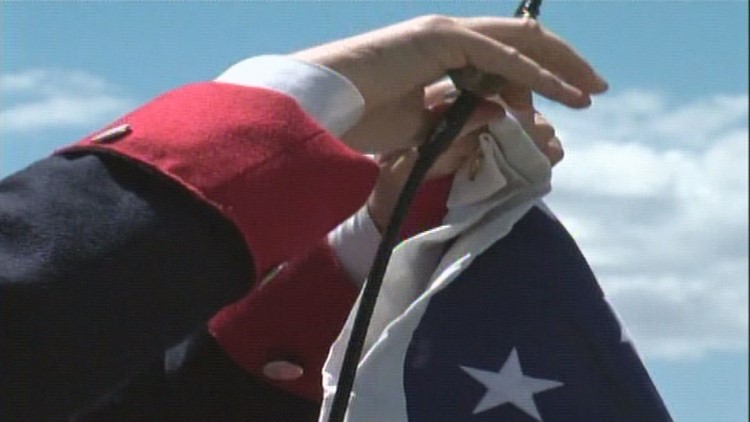 Photo by: KUSA
In honor of Flag Day, the Sons of the American Revolution raised a flag in full costume Wednesday with a procession and musket volleys at the summit of Genesee Mountain.

Blade of glory: The mystery around a late president's sword

An Ohio sheriff says an investigation to determine the owner of sword wielded in the American Revolution and the War of 1812 is widening.

Neil says the case could take weeks to resolve.

Police in Connecticut seized the sword last month, just before an auction.

Members of the Harrison-Symmes Memorial Foundation some 15 miles (24 kilometers) west of Cincinnati suspect it is a historical sword that disappeared 40 years ago from the Cincinnati Historical Society.

The would-be seller James Kochan says he thinks the missing Cincinnati sword was a copy.

Kochan, of Wiscasset, Maine, says he is a veteran collector who bought the sword in 2015 from a collection being sold by Christie's auction house in New York.

He was offering it Oct. 19 as part of an auction of artifacts from the American Revolution, the War of 1812 and the Napoleonic Wars and said the sale would benefit his Mars & Neptune Trust, dedicated to the preservation of American military and naval history, sites and artifacts from before 1850.

RELATED: There's a 23-mile pipe under the Continental Divide that sends water to Denver

However, Dave Sunberg, a member of the Harrison-Symmes foundation who searches for memorabilia to add to its museum, spotted the sword online the day before the auction and emailed another foundation member.

Soon, word spread that they had apparently found the sword they believed had been stolen in Cincinnati some 40 years ago.

Windsor, Connecticut, police officers showed up at the auction house less than two hours before the sword was to go up for auction. Kochan said he had told the Harrison-Symmes foundation his sword was authentic and his to sell; he reluctantly turned it over to police.

It's now in custody in Hamilton County, where the Harrison-Symmes foundation historians say the Symmes family donated it to Hamilton County Probate Court in 1922. Documents show the court loaned the sword to the Cincinnati Historical Society, which used it in a 1976 Bicentennial display.

Sometime within the next few years, it disappeared from a Cincinnati museum.

It seems likely their investigation will last longer than Harrison's presidency. The ninth president developed pneumonia and died on his 32nd day in office.