'They don’t have any evidence' | Venezuelan judge convicts 6 American oil executives, sentences them to prison

The so-called "Citgo 6" are employees of Houston-based Citgo refining company. 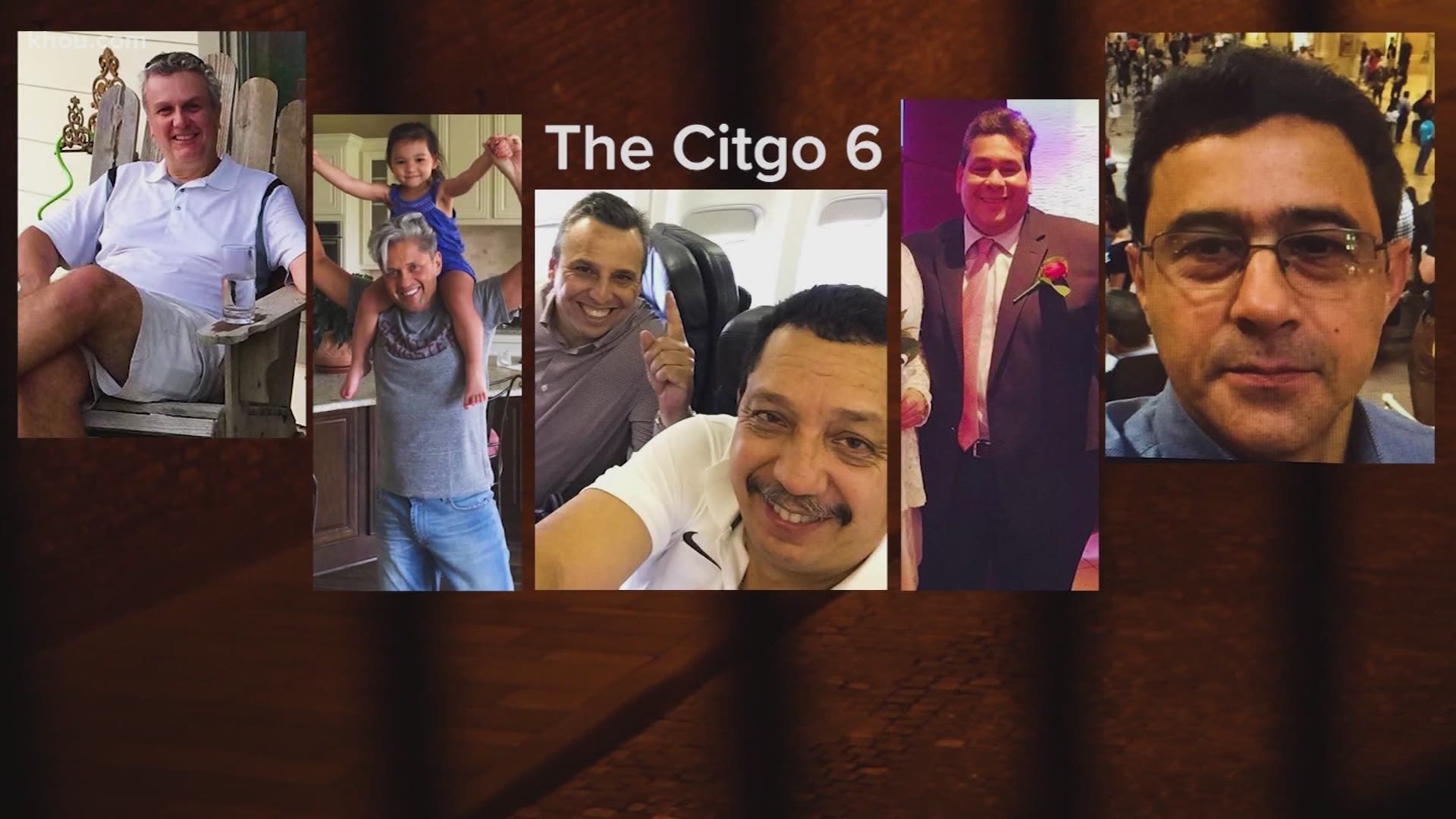 CARACAS, Capital District — Six American oil executives held for three years in Venezuela were found guilty of corruption charges by a judge Thursday and immediately sentenced to prison, defense lawyers said, dashing hopes of a quick release that would send them home to their families in the United States.

Some relatives had been bracing for the disheartening outcome, which came on the evening of Thanksgiving Day. Defense attorney Jesus Loreto called the trial’s result “bad news” and said the verdict was based on little or no proof presented by government prosecutors.

“They don’t have any evidence to hold these guys accountable for any wrongdoing,” Loreto said. “They ought to be released.”

Attorney María Alejandra Poleo, who helped represent three of the men, said: “Of course, the defense will appeal the decision to the court.”

The so-called Citgo 6 are employees of Houston-based Citgo refining company, which is owned by Venezuela’s state oil company, PDVSA. They had been lured to Venezuela three years ago for a business meeting and were arrested on corruption charges.

"While we do not have first-hand knowledge of these reported convictions, we are distressed to read about this outcome. We continue to pray for them and their families and hope for a resolution that will lead to their prompt release, Citgo said in a statement. "We also hope that the Venezuelan authorities honor the request of the United States Government that they be released."

Their arrest launched a purge by President Nicolás Maduro’s government of PDVSA and at a time when relations between Caracas and Washington were crumbling.

Their arrest launched a purge by President Nicolás Maduro’s government of PDVSA and at a time when relations between Caracas and Washington were crumbling.

Five of the men were sentenced to prison terms of 8 years and 10 months, while one of them received a 13-year sentence. Loreto said the five men with lesser terms could be released on parole in a couple of years.

Relatives did not immediately comment, nor did Venezuelan officials.

One of the men, Tomeu Vadel, has said in a letter written in a Caracas jail and provided exclusively to The Associated Press that he had hopes for a fair trial so he could walk free with his name cleared and go home to his family in the United States.

Vadell said in the letter that it was especially painful to be separated during the Thanksgiving season from his wife, three adult children and a newborn grandson he has never held.

“Before living this tragedy, these celebrations were very special times for our family,” Vadell wrote, saying he embraced the traditional American holiday after moving in 1999 from Caracas to Lake Charles, Louisiana, for a job with Citgo. “Now, they bring me a lot of sadness.”

It’s the first time Vadell, or any of the so-called Citgo 6, had spoken publicly since being arrested and charged within a purported big corruption scheme. He has been held at a feared Caracas jail called El Helicoide.

Despite his circumstances, Vadell had held out hope.

“During the trial, the truth has proven undeniable,” Vadell said in the four-page hand-written letter. “It proves that I am innocent.”

Vadell, 61, and the five other Citgo executives were summoned to the headquarters of PDVSA for what they were told was a budget meeting on Nov. 21, 2017. A corporate jet shuttled them to Caracas and they were told they would be home for Thanksgiving.

Instead, a cadre of military intelligence officers swarmed into the boardroom and hauled them off to jail.

They were also charged with embezzlement stemming from a never-executed proposal to refinance some $4 billion in Citgo bonds by offering a 50% stake in the company as collateral. Maduro at the time accused them of “treason.”

They all pleaded innocence.

The trial played out one day a week in a downtown Caracas court. Due to the pandemic, sessions were held in front of a bank of dormant elevators in a hallway, apparently to take advantage of air flowing through open windows.

News media and rights groups were denied access to the hearings. There was no response to a letter addressed to Judge Lorena Cornielles seeking permission for The Associated Press to observe.

The office of Venezuela’s chief prosecutor said prior to the verdict in a statement to AP that investigators found “serious evidence” that corroborated financial crimes potentially damaging to the state-run company.

“The Citgo case has developed normally during all the stages established by the Venezuelan criminal process,” the statement said.

Loreto said his client appeared to have been caught up in a “geopolitical conflict” of which he was not a part. He said Vadell’s name never appeared on any of the documents prosecutors read into evidence.

“There’s nothing that refers to Tomeu in any way -- directly or indirectly,” the lawyer said. “This is the story of a good guy being held against his will for all the wrong reasons.”

Former New Mexico Gov. Bill Richardson, who has negotiated the release of other Americans held by hostile governments, traveled to Caracas in July and met with Maduro.

He didn’t win their freedom, but days later two of them — Cárdenas and Toledo — were freed from jail and put in house detention. Two weeks later, the long-delayed trial began.

Richardson told AP that conversations with the Venezuelan government continue despite his meeting with Maduro being “a little stormy.” He said he believes there is an opening tied to President-elect Joe Biden and a desire by Maduro to improve relations with Washington.

“I think the Venezuelans have been straight with me, but more progress needs to be made,” Richardson said before the verdict. “My hope is to have something positive by Christmas.”

It is not clear what approach Biden will take toward Maduro. Trump aggressively pressed to remove Maduro through sweeping financial sanctions and the U.S. Justice Department has indicted Maduro as a “narcoterrorist,” offering a $15 million reward for his arrest.

Vadell’s letter steered clear of politics. He didn’t mention Maduro or speak about his jailers, though he did express concern about the “consequences of repercussions” of speaking out.

With encouragement from his family, Vadell broke his silence, taking a risk relatives said was necessary.

The five other men did not respond to invitations The Associated Press made through their lawyers to comment.

Vadell’s daughter, Cristina Vadell, 29, said in a phone interview from Lake Charles that her father isn’t the kind of person who seeks attention. Rather, he prefers to focus on work and his family.

During his 35-year career with PDVSA and Citgo, Vadell ended up running a massive refinery in Lake Charles and then became vice president of refining. The letter attempts to expose this side of his life, she said.

“I think he was willing to take some risks and open some hearts to allow him to come home,” she said. “I think he’s still wondering ‘What happened?’ He went to a work meeting and never came home.”

She shared photos of the family with her father, standing around a Thanksgiving turkey. Each year, they would give it a name, something like Charlie or Phillip. The past three Thanksgivings just haven’t been the same without him, she said.

Vadell wrote that he’s proud to be the son of Spanish immigrants to Venezuela, where he was educated as an engineer. He brought his family to the U.S., bringing the best of the two countries together, he said.

“I’m now reaching an intersection where if justice is done, I will be able to rebuild my life and try to compensate my family for all the lost moments,” Vadell wrote. “The light is intense -- the hope is great -- give me freedom.”