Virginia victims had 150 years of combined service with city

All but one of the victims were city employees. 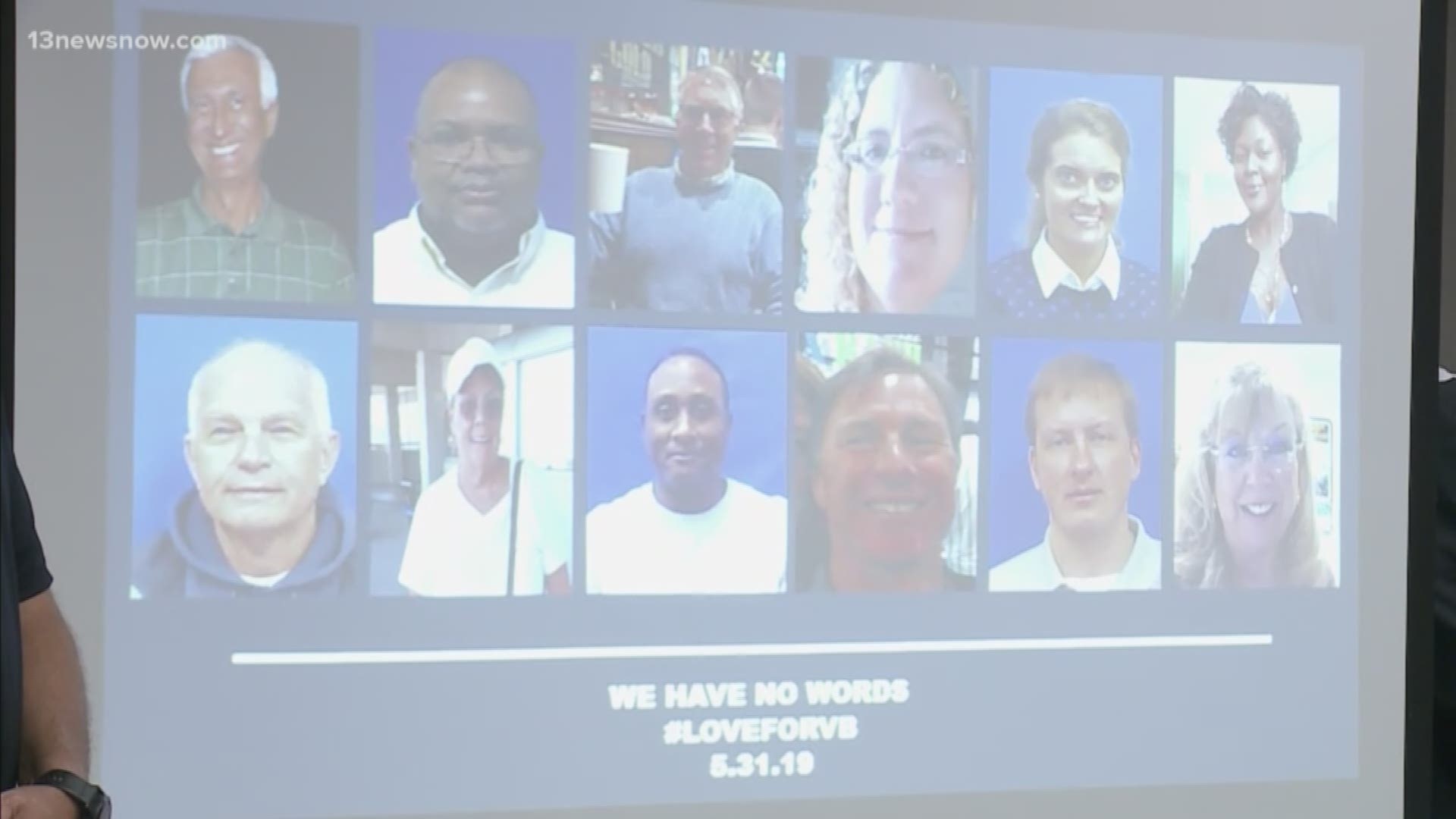 The 12 people who were fatally shot in a Virginia Beach government building were remembered Saturday during a somber news conference as officials sought to put the focus on those who died and not the gunman.

"We want you to know who they were so you can learn in the weeks and months to come what they meant to all of us, their families, their friends and their coworkers," City Manager Dave Hansen said at a press conference. "They leave a void that we will never be able to fill."

City Manager Dave Hansen said he had worked for years with many of the dead, 11 of whom were city employees. The 12th was a contractor trying to get a permit.

Their names and photos were projected on a screen as Hansen read aloud biographical information that included their hometowns and years of service.

One of the dead employees had worked for the city for 41 years. Six worked in the same department as the suspect, though authorities have declined to say if anyone was specifically targeted or if the suspect had issued threats before. The victims were found throughout the building, on three floors, police said.

The municipal building was open to the public, but security passes were required to enter inner offices, conference rooms and other work areas. As a current employee, the gunman would have had the pass to enter the inner offices, Hansen said.

Laquita C. Brown of Chesapeake: A right-of-way agent with more than 4 years in public works.

Tara Welch Gallagher of Virginia Beach: An engineer with 6 years in public works.

Mary Louise Gayle of Virginia Beach: A right-of-way agent with 24 years in public works. Gayle was described as a "super sweet lady" who always had a big smile. "She would always be out there in the yard, working on something and talking to my daughters," John Cushman, Gayle's next-door neighbor, told The New York Times.

Katherine A. Nixon of Virginia Beach: An engineer with 10 years in public utilities.

Richard H. Nettleton of Norfolk: An engineer with 28 years in public utilities.

Christopher Kelly Rapp of Powhatan: An engineer with 11 months in public works.

Rapp enjoyed Scottish music and joined a pipe band last fall. He played with the group in October during a Celtic festival in Virginia and marched with bandmates on St. Patrick's Day.

"Chris was reserved but very friendly, quietly engaging members one-on-one after our weekly practices," the band, Tidewater Pipes & Drums, said in a statement.

Ryan Keith Cox of Virginia Beach: An account clerk with more than 12 years in public utilities.

Joshua A. Hardy of Virginia Beach: An engineering technician with more than 4 years in public utilities.

Herbert "Bert" Snelling of Virginia Beach: A contractor who was there to fill a permit.

Chaplains and family assistance workers worked through the night to notify relatives — a job that Hansen described as "the most difficult task anyone will ever have to do."

The police and fire departments were to assign members of their honor guards to help each victim's family.

1 / 12
City of Virginia Beach
Cox was an employee for the city for 12.5 years. He was an account clerk in Public Utilities.

Dr. Martin O'Grady told a news conference Saturday that one patient had just gotten out of surgery and another patient faced repeated operations for wounds inflicted when a gunman opened fire at a municipal building in Virginia Beach.

O'Grady is head of the hospital trauma unit. He said two of the patients being treated at the hospital had sustained "significant" injuries but were expected to survive. He described a third patient's injuries as "devastating." He would not elaborate due to health care privacy laws.

Authorities said earlier that a fourth patient was receiving treatment at a hospital in Norfolk.

The Associated Press contributed to this report